“THE GREATEST IDENTITY FRAUD IN HISTORY” 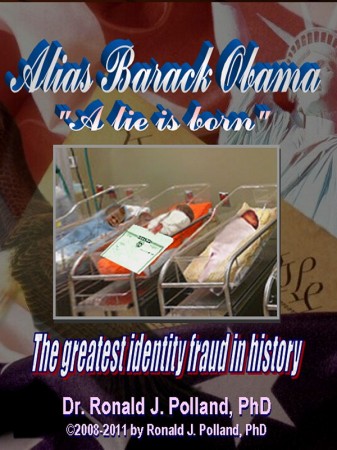 (Jul. 21, 2011) Dr. Ron Polland, PhD, has just finished a new e-Book, Alias Barack Obama: The Greatest Identity Fraud in History that covers his three-year investigation into the life and background of Barack Hussein Obama, and the mystery of his online birth certificate. During the course of his ground-breaking investigation, Dr. Polland collected massive amounts of evidence that reveal a wide network of collaborators working together to put an imposter into the White House in fulfillment of a Marxist agenda to fundamentally transform America.

What began as a simple study of the online image posted on June 12, 2008 by the Daily Kos blog and the Obama Campaign had mushroomed into a full-blown research project consuming more than 4,000 man-hours of work into what was nothing less than a well-orchestrated conspiracy to subvert the Constitution and the free election process. The maxim, “One thing leads to another,” is the best way to describe how Dr. Polland used his 30+ years of doctoral-level research skills to follow the trails wherever they led him.

More than any one factor, the online image purported to be Obama’s Certification of Live Birth (COLB) is the key that links the collaborators together. As the days turned to months, and the months turned to years, the COLB was the one constant for which so many people and organizations had engaged in illegal activities to suppress the truth about Barack Obama. For Dr. Polland, the issue with Obama was not his eligibility, but his identity and his treachery in lying about his legal name, his biography, his education, his accomplishments, his associations, his religious ideology, and his place of birth.

Moreover, the ways in which he and his collaborators enlisted the so-called Free Press into doing his bidding, in promulgating a forgery and a fictitious identity, in promoting a false Messiah and defending a traitor-in-hiding is as reprehensible as it is unforgivable. This conspiracy makes Watergate seem like Sesame Street.

Alias Barack Obama, Vol. 1: A lie is born is an interactive PDF filled with detailed graphics and embedded videos and is readable on all PCs, Macs, and Android phones. In the next few weeks, EPUB versions will be available for the Nook, Kobi, and Ipad, and MOBI for Amazon Kindle and MobiPocket Readers.

This is a project on which I have been working, non-stop, for the past three years. As you recall in our initial interview exactly a year ago on how I started (The Post & Email’s “That’s Not a Genuine Scan.”), I envisioned this investigation into “Obama’s Certification of Live Birth,” aka the COLB, lasting no more than three months. I would review all the information I could gather, analyze what I found, report on it, and then be done. Then, Factcheck.org came out with their infamous “photo shoot” on August 22, 2008 that did more to confirm my theories than it did to thwart everyone else investigating the COLB.

Chapter I: The One is born, explores the rise of Obama, the liberal media’s Rock Star Candidate for State Senator in 1995, US Senator in 2004, and President of the World in 2008. In 2004, Obama was still a blank slate to the media, but instead of doing any true investigative reporting into his background, they relied on “Dreams From My Father” to do it for them as if his memoirs were etched in stone. Whether blinded by his charisma or his exotic biography, the liberal media rarely doubted a word Obama said or wrote.

Chapter II: Fact-checking media fraud introduces you to the new breed of online political analysts known as “nonpartisan political fact checkers.” They claim to be “consumer advocates” who “sort out the truth in politics,” yet they are really leftwing propagandists launching attacks against Obama’s opponents and critics while ensuring that Obama would be elected, his policies enacted, and his false identity protected.

The role they played in manipulating the outcome of the Presidential election cannot be overstated: by hiding Obama’s true identity and political ideology to influencing public opinion in favor of his liberal leftwing legislation to shielding his activities from scrutiny.

Chapter III: Anatomy of a forgery takes you through the quest to solve the mystery of Obama’s COLB: a 2½ year odyssey of painstaking analytical research, true scientific experimentation, and a good deal of old-school, detective work devoted to answering a simple question: “Did the Daily Kos post a genuine scan of Barack Obama’s paper Hawaiian Certification of Live Birth (COLB)?” The mystery of Obama’s COLB has been solved, but the revelations that followed were more significant than the forgery itself.

The importance of this fraudulent birth certificate had grown exponentially since it first appeared in June 2008, going from a curiosity to becoming the de facto evidence of Obama’s citizenship. A large number people banked their very reputations on it being real and the stakes could not be higher if this massive conspiracy were to fall apart. Every other piece of “evidence” that followed the COLB was created in defense of it.

Chapter IV: Blue Hawaii caught red-handed goes right to the heart of Barack Obama’s identity fraud. Hawaii is the largest repository of the most liberal, most pro-Obama, and least credible state government officials in the country. No other state in the nation comes close, with the possible exception being Illinois. The dirty money that was shoveled to Democrats, like Clinton and Obama, put it in a class all by itself.

The focus of Dr. Polland’s book is different from Jerry Corsi’s book, “Where’s the Birth Certificate,” in that he links together the creation of the COLB and the conspiracy to fabricate and hide the identity of Barack Obama leading up to the election of 2008.

The book is available for immediate download here: http://abo.dr-rjp.com