Misprision of Felony: Report the Crime!

HOW MANY PEOPLE WILL CONTACT PUBLIC OFFICIALS ABOUT OBAMA’S FAKE BIRTH CERTIFICATE?

(May 28, 2011) — If you are a U.S. citizen, and you become aware of a felony that has been committed, it is your responsibility to report that felony to some person in civil or military authority:

Whoever, having knowledge of the actual commission of a felony cognizable by a court of the United States, conceals and does not as soon as possible make known the same to some judge or other person in civil or military authority under the United States, shall be fined under this title or imprisoned not more than three years, or both. Title 18 U.S.C. Chapter 1, § 4

We all witnessed a crime committed on national TV April 27, 2011 when Obama presented an electronic image and paper copies of  his supposed LFCOLB.  We knew within minutes that the document was a fake, and found out Jerome Corsi knew the same at least one month before it was released.  We have all read and probably can recite the precise ways in which this electronic image is a forgery.

On Monday and Tuesday next week, Dr. Corsi will be writing about the criminal complaint filed with the FBI/Department of Justice regarding the forged LFCOLB image.   He is acting as Title 18 U.S.C. would have an American citizen do.

A reminder here that Dr. Corsi is not the only one who has independent evidence of the forgery, as each one of us can see it on our computers if we need to, but we certainly are aware of the evaluations that have been done and the numerous reports about it.  We also have late-breaking news from Miss Tickly on the debossed seal found on the 2008 COLB, and there is a non-discernible seal–i.e., embossed or debossed,  on the electronic image recently released.

No allegiance to the U.S.

We also are aware from the chain of custody records released by the White House that a paper copy of the LFCOLB was retrieved from Hawaii, and that the image the White House released could not have been a scanned image of the document retrieved from Hawaii.  This suggests that a forgery was completed on U.S. government property using government personnel and resources in the District of Columbia.

The point is is that we all know about the felony, and now its our duty to report it. To everyone in civil or military authority.  This could include:

Pick one, pick some, pick them all.  And why not throw in a few facts and cites on social security fraud?

The Senators and Congressmen must be pressed to initiate an FBI investigation of the forgery…in this manner we can add Congressional pressure to help Corsi’s direct approach to the FBI.

Citing your responsibility as an American citizen under Title 18, you are reporting what you saw on April 27, 2011 and what and how you know the image is a forgery.  Include, attach or cite the best references.

Thousands of FAXES requiring the ‘civil or military authority’ secure an FBI investigation into the forgery puts pressure on them all…its a start on keeping them on their toes.

Tens of thousands of FAXES with the language of Title 18 front and center will remind those staffers picking up the FAXES of their responsibilities too.

Because the people are coming…did they forget who pays their salaries? 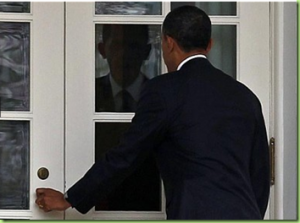 Lock him out permanently

Misprision of Felony: Report the Crime! added on Saturday, May 28, 2011

35 Responses to "Misprision of Felony: Report the Crime!"