U.S. Supreme Court Clerk: Letters to Justices have been “thrown away”

“SO AS NOT TO INFLUENCE THE COURT” 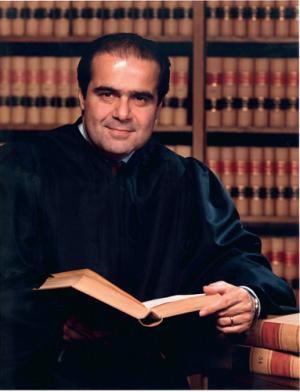 U.S. Supreme Court Associate Justice Antonin Scalia was appointed by President Ronald Reagan in 1986. He was the valedictorian of his graduating class from Georgetown University.

Although I had written my Congressional delegation, the Republican (so called) “leadership” and every member of the Supreme Court over the last two years concerning Barack Obama/Barry Soetoro not being eligible for the Presidency of the United States, I had failed to get any satisfaction. The person answering the phone at the Supreme Court actually told me that letters were thrown away so as not to “influence the Court”! I thought this rather arrogant as they work for US. I learned, back when I studied Civics in high school some 65 years ago, that the Founding Fathers left the power with the People in this country, or at least they thought they had.

Anyway, on July 8th I thought I’d try Justice Antonin Scalia again, as I have been impressed with him since his appointment to the Court; only this time I sent it certified with a return receipt requested. The Post Office told me that it could take up to three weeks for delivery because of the post-9/11 security measures. After hearing nothing, I phoned the Post Office again yesterday and was informed the letter had been signed for by a “Lucy Johnson” at the Supreme Court on July 13th! but I have yet to get that return receipt. I am chagrined to realize that I will probably not get any reply from this effort either. It hurts to see how far our once great nation has fallen.

As it appears that I will not get a response from Justice Scalia, I have submitted my letter to you for publication. I even wrote to my local paper asking why they fail to cover this issue, but they refused to print the letter and gave me a mumbo-jumbo “run-around” but neglected to tell me to whom I SHOULD address it.

I am writing to you (again) in hopes of getting some information.  I have been impressed with you since your appointment by President Reagan to the Supreme Court and your appearances on that “jury show” on PBS with Fred Friendly (?) As the moderator.  You are often referred to as having a fine legal mind.  I am an 80 year old with no legal training but remember well my High School Civics class of some 65 years ago when we were taught that the Constitution required that the President of the United States had to be a natural born citizen, which, among other factors, required that the person had to be born on United States territory and with both parents being U.S. citizens; although one or both could be naturalized.

Mr. Barack Obama fails to meet that standard and yet no one in “government” seems to care! With no responses whatever, I have contacted the members of “my” Congressional delegation (with no results until I “cornered” Frank D. Lucas, “my” Representative after a town hall meeting where he gave me a far-fetched “answer”.  He told me that because “neither McCain nor Clinton contested Obama’s filing [for presidential candidacy] within 72 hours of that filing, it was a moot point”.  When I asked him where that was in the Constitution, his aides whisked him out of the building.), the Chairman of the RNC (where a staffer told me the Chairman would not “embarrass” himself by addressing the issue), the Republican “leadership” of both houses of Congress and every Member of the Supreme Court, except Justice Sotomayor, some more than once.  I realize fully well that legal ethics may preclude your providing me with any answers and I regret that.   Therefore I am asking if you would be so kind as to provide me with a reliable contact who could explain this conundrum to me.

When I donned our country’s uniform some 60 years ago, I also swore an oath to our Nation and Constitution.  As I never revoked that oath, I feel it as valid 24/7 today as it was then.  I consider that I swore the oath, not the “uniform”.  I see nothing in the Constitution that would give the Supreme Court, in toto, original jurisdiction, but does that prevent the individual Justices from defending our Constitution from this assault as individuals?  I have a similar question for all the 535 Members of Congress; but have failed to get a reply from any one of the many I have queried.  I have contacted countless candidates seeking offices across the land and have received but one positive response saying she would take up this issue if elected.

As you are well aware, the First Amendment to the Constitution states, “Congress shall make no law… abridging the right of the people… to petition the Government for a redress of grievances”; yet lawyers such as Mr. Apuzzo, Mr. Berg and Dr. Taitz who represent a multitude of plaintiffs have all had their cases thrown out for the reason the plaintiffs “do not have standing”.  Isn’t this at cross purposes with the right to petition?  Shouldn’t that “petition” at least be heard in entirety?  How does a citizen not have “standing” when the actions by this person and his regime  are having such an adverse effect on our economy, our security and the very survival of our Nation and the Constitution which has served us so well in the Past?

Justice Scalia, I am frustrated, confused and lost.  Granted I flunked out of my first year at Case School of Applied Sciences in Cleveland, Ohio, in my youth; but I later became a licenced commercial, instrument rated pilot with multiple ratings so I do not consider myself stupid and I do not think that senility has yet taken over; so could you please steer me in a direction to an answer as to why our government seems so content to suffer this daily and constant shredding of our Constitution by this imposter and his regime of thugs?  Did our Founding Fathers leave us so at the mercy of someone whose goal is the destruction of all that so many have fought and died for?

I will truly value any information you may give me.  I would greatly appreciate a reply, even if it is only to say that you are unable to be of any assistance.

U.S. Supreme Court Clerk: Letters to Justices have been “thrown away” added on Thursday, August 19, 2010

32 Responses to "U.S. Supreme Court Clerk: Letters to Justices have been “thrown away”"