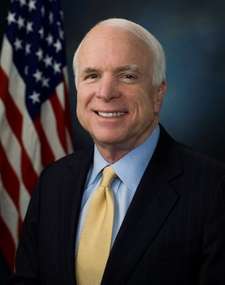 (Aug. 12, 2010) — The following, open letter to Senator McCain was written by Margaret Calhoun Hemenway. Her concern is the grave damage being done to the US military due to Mr. Obama’s refusal to demonstrate his eligibility status.

During the 2008 presidential campaign, the media (the original “birthers”) hounded you about your “natural born” status- a law professor in Arizona even made the outrageous assertion, completely unjustified, that you were not “natural born” because of your birth in Panama.  As a result, you released your original birth certificate.  The controversy grew so heated that your Senate colleagues held a hearing and passed a unanimous, albeit non-binding resolution proclaiming you were “natural born” and therefore eligible to run for President.  Senator Obama and Senator Clinton even co-sponsored this resolution.  The Senate resolution was conspicuously silent on Senator Obama’s “natural born” status.

Unfortunately, you never asked your rival to produce his original birth certificate– even though a roiling controversy still surrounds his birthplace- with no hospital in Hawaii willing to claim to be his place of birth- and recently, a senior elections clerk offered to testify in court that everyone in his office knew, presumably to include his supervisor Glenn Takahashi, that there was no hospital birth record for Obama.  This elections official was serving during the 2008 election in Hawaii with access to databases.  Three prominent Kenyans have declared Obama was born in Kenya, contrary to his official birth narrative– including his paternal step-grandmother, Sarah Obama, Ambassador Peter Ogego (on WRIF radio in November 2008) and recently, in March, Cabinet Minister James Orengo- on the floor of the Kenyan Parliament.

Army Lieutenant Colonel Terrence Lakin is being court-martialed for asking Obama to produce an original birth certificate- consistent with the oath he swore as an officer- of loyalty to the U.S. Constitution.  His deployment orders to Afghanistan required him to produce his birth certificate- yet the man who controls America’s nuclear arsenal, with command over ALL the US Armed Forces refuses to submit his for public scrutiny.  Truthfully, the citizenship status of the President of the United States- remains undetermined. You are ranking on the Senate Armed Services Committee with oversight over the Department of Defense- it is incumbent upon you to raise your voice- to ask Obama to release his birth records and to avert this court-martial and the ruination of a fine officer’s career- a man who has served 18 years, was selected for promotion to Colonel- and who has deployed multiple times, including to combat zones, in service to his country.

You are seen by many as a hero for your tragic capture and torture in Vietnam- even today, our soldiers trained on “duty to disobey” because of Nuremberg and My Lai. LTC Lakin is upholding this positive duty to affirm the legality of his orders.  If we do not resolve this controversy now, you might expect that soldiers who were part of Obama’s surge, who will come home missing arms and legs, and like others before them who served in uniform, will undoubtedly file lawsuits in other courtrooms, asking judges if they have standing.   This will rip apart the Armed Forces- it is causing dissension already among our people and emotions are escalating.  This unanswered question- was Obama born in Hawaii- or Kenya- must be dealt with now.  There is a shadow over this Presidency which could be ended immediately if Obama directs his lawyers to release his original birth record, just as you did in 2008.  We learned from the Nixon Administration the huge and painful cost of a cover-up; this cover-up extends directly to 1600 Pennsylvania Avenue.

Margaret Calhoun Hemenway is a 15-year veteran of Capitol Hill and a former White House appointee, serving at both DoD and NASA. Currently, she is the unofficial spokesperson for Lt. Col. Terrence Lakin, now being court martialed for refusing to obey orders pending assurance that Obama is legally serving as Commander-in-Chief, consistent with Article II, Section 1 of the U.S. Constitution.

Senator McCain: Come to the aid of your country added on Thursday, August 12, 2010

21 Responses to "Senator McCain: Come to the aid of your country"