(Aug. 1, 2010) — The U.S. State Department has released 14 pages of documentation in response to a Freedom of Information Act request made by Mr. Christopher Strunk dating back to October 2008.

Strunk was originally directed to make his request to the Bureau of Customs and Border Control, which is part of the Department of Homeland Security.  He did so and stated that the records he had requested “do not fall within any of FOIA exemptions items” (page 7).

He also claimed that “The above requested documents are extremely critical and important to Petitioner as well as the general public and are of substantial public interest” (page 8).

Strunk stated that Obama was born in “Mombasa, Kenya” and, citing the 1940 Nationality Act followed by the 1952 Nationality Act, claimed that his mother, Stanley Ann Dunham, “did not meet the citizenship requirements to register Barry Soetoro’s birth as “natural born…” (page 11).

He further contended that Obama, aka Barry Soetoro, was registered as an Indonesian citizen to attend the Fransiskus Assisi School in Jakarta, and that “The Indonesian  school, upon registration of a new student, verified the citizenship status and name of the child with the Indonesian Government; moreover, Indonesian Immigration and police checked all public schools on a weekly basis to ensure the only students attending were in fact Indonesian citizens” (page 12).

The  original response letter to Strunk from the State Department is as follows:

Strunk was denied the “expedited processing” he had requested and access to Obama’s records because Obama had not granted permission for them to be released.  Strunk then filed a lawsuit dated November 26, 2008 in which he suggested that Barack Hussein Obama might be an illegal alien based on the school registration form from  his former elementary school in Indonesia designating his citizenship as “Indonesian.”

Strunk also alleged that it appeared that someone was using Stanley Ann’s social security number illegally while working for the Ford Foundation in New York (page 7).

Strunk had claimed that none of the information he had requested should qualify for the government to refuse to release it.

On April 23, 2009, the named defendant, the Department of State, denied most of Strunk’s allegations and filed a Motion to Dismiss.  On page 2, the respondents claimed that the plaintiff was not “entitled to relief.”

On July 29, 2010, 14 pages containing passport applications were released to Strunk, who had requested records from 1960 and onward.  In its letter, shown below, the State Department said that “Many passport applications and other non-vital records were destroyed during the 1980s in accordance with guidance from the General Services Administration.”  However, the General Services Administration website produces nothing when a search for such “guidance” is requested.

Dunham seems to have applied every five years for a passport for international travel.

His birth date is stated as Jan. 2, 1936 on a subsequent passport application:

There are two locations  and dates given for her marriage to Lolo Soetoro:

and a missing social security number:

After her 1980 divorce from Soetoro, she evidently reverted to using her maiden name:

Although little has been reported about any of Obama’s family members, news reports during the 2008 presidential campaign stated that Madelyn Payne Dunham, Stanley Ann’s mother, worked at the Bank of Hawaii.  However, on one of her passport applications, Stanley Ann stated that it was her father who worked there:

News reports had stated that Stanley Armour Dunham was a furniture salesman.

On her 1986 passport application pictured above, Stanley Ann listed an address of 1512 Spreckels, Apt. 402, Honolulu, HI  96822, but it is crossed out with a handwritten note which reads:  **4/9/86 – ppt mailed to perm. address per her written request – attached.”  Lower on the form is her parents’ address, 1617 S. Beretania Street, although she mistakenly wrote their names as “Stanley Ann Madelyn Dunham.” She indicated that she would be traveling to the Philippines for a week.

A handwritten note seems to imply, however, that 1512 Spreckels St. was her permanent address:

Neil Sankey, a private investigator, developed a list of names and addresses which appear to relate to Stanley Ann Dunham from Hawaii to New York City.  She has been known by many different names.

The State Department employee who wrote to Strunk upon release of the documentation suggested that Stanley Ann Dunham’s passport records prior to 1965 were destroyed.  However, the National Archives states that passport records from 1795 and forward have been maintained and that “Passport applications can be an excellent source of genealogical information, especially about foreign-born individuals.”

Is that the reason why the State Department refuses to release Obama’s passport information?

A 1971 application states that Dunham’s passport “is not valid.”

I have been informed that my passport is not valid and that a valid passport is required by law to enter the United States.  I request that an exception be granted to me, as provided in Section 53.2(h), Title 22 of the Code of Federal Regulations.  I understand that a fee of $25 is required under Section 53.2(h) and I will remit such fee to the Passport Office, Department of State, Washington, D.C., 20524, within 30 days.

Is that because she became an Indonesian citizen or dual citizen?  Why could she not obtain a “valid” passport at that time?

Directly below her signature is the text:  “Report – Pursuant to Section 215 of the Immigration and Nationality Act of 1952”.  However, lower on the form, in response to “Identity Documents Presented” are the words “Passport as shown above.”

The space for an official stamp has a handwritten date of October 21, 1971:

The Immigration and Nationality Act of 1952 established U.S. citizenship for those born in Guam and the Northern Mariana Islands.  It deals primarily with immigration of foreign-born individuals to the United States but defines both “aliens” and “citizens.”

There is one reference to one of Stanley Ann’s alleged children on the released records.  On page 4, in the area designated “Amend to include (exclude) children,” the name “Barack Hussein Obama” appears with “(Soebarkah)” below it, but the entire text is crossed out: 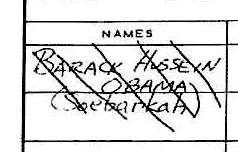 Was this a reference to the man who now occupies the White House or someone else? What does “Soebarkah” mean?

“Soebarkah” appears to be a common Indonesian name. However, it does not appear in the Indonesian dictionary, of which The Post & Email checked three.  The last name “Soetoro” also yields nothing.

If it is a surname, does this mean that Obama was adopted by Lolo Soetoro?

A warning appears on some of the passport application pages which reads:

If Stanley Ann Dunham was Obama’s mother, what did he learn from her?