Congressman Murphy: A case study in feigned ingnorance in service of tyranny

SAYS IT’S UP TO THE COURTS, BUT DECLARES OBAMA ELIGIBLE ANYWAY IN SUPPORT OF HIS USURPATION

(Mar. 13, 2010) — After receiving a letter from a constituent about the questions surrounding Barack H. Obama’s constitutional eligibility to be president, Congressman Scott Murphy responded that according to the Constitution, it was up to the courts to decide the meaning of “natural born Citizen.” The two letters Murphy sent in reply are posted below.

However, if it is up to the courts to define “natural born Citizen,” then Murphy should have cited the four Supreme Court cases which have already done so. Using these cases as precedent, Obama would not have qualified to serve as President.

I know you are mistaken in the letters I have received from you in response to a letter I wrote to the Senator of Hawaii, Daniel Kahikina Akaka.

Firstly, you wrote “we all have to rely upon our courts for the proper interpretation of the Constitution,” and that is incorrect. The Founding Fathers knew that not only could there be corruption in the government but also in the courts, including the SCOTUS. So what was created was NOT a democracy of one vote over majority but a REPUBLIC, a Nation of “Laws, not of men.” The Power of this Great Nation, who so many gave their lives in the name of Liberty for you and me comes from our Creator and that power belongs to The People. THE DECLARATION OF INDEPENDENCE: “That whenever any Form of Government becomes destructive of these ends, it is the Right of the People to alter or to abolish it, and to institute new Government, laying its foundation on such principles and organizing its powers in such a form, as to them shall seem most likely to effect their Safety and Happiness…”

The Ninth and Tenth Amendments of The Bill of Rights indicate where the power lies within The Law of the Land, and it says “The People.”

So that brings us to: where, then, is the meaning of Natural Born Citizen within the context of the United States Constitution? Article 2, Section 1, Clause 5 of the U.S. Constitution: “No Person except a Natural Born Citizen, or a Citizen of the United States, at the time of the Adoption of this Constitution, shall be eligible to the Office of President…”. We can stop there because some of the key words are within this part of Article 2. To just be a Citizen and become POTUS, one would have had to have been alive “AT THE TIME OF THE ADOPTION OF THIS CONSTITUTION” and still breathing at the PRESENT. As you well know, that is highly unlikely. Now, to be President of the United States, you MUST BE A NATURAL BORN CITIZEN. Clearly, without a doubt, this shows that a Citizen IS NOT the same as a Natural Born Citizen.

Murphy included in his responses to the constituent, “I note for the records that our native son, Martin Van Buren, was a citizen of Holland and the United States at the time of his birth, and he was the first Natural Born Citizen to be elected president of the United States.”

The constituent confronted Murphy on that point:

Murphy cites no sources for his statement, nor does he explain how a person could be a dual citizen and “Natural Born Citizen” at the same time. This is the exact same question which was raised about Obama almost two years ago after his website admitted that he was born “a dual citizen of Kenya and the U.S.” and described him as a “native citizen,” not “natural born Citizen.”

Creates his own Definition

The constituent addressed that issue, quoting from Article I, Section 8, clause 10 of the Constitution:

“The Congress shall have Power to define and punish Piracies and Felonies committed on the high Seas, AND OFFENCES AGAINST THE LAW OF NATIONS.” YES, the Law of Nations is in and part of The United States Constitution. It was the common law between the Nations at that time and now. You can research more on Emmerich de Vattel, “The Law of Nations” by just typing it in your web browser.

The Law of Nations, Book 1, Chapter 19, Section 212, Citizens and Natives: The citizens are members of civil society; bound to this society by certain duties, and subject to its authority, they equally participate in its advantages. The natives, or natural born citizens, are those born in the country of PARENTS WHO ARE CITIZENS. As the society cannot exist and perpetuate itself otherwise then by the children of the citizens, those children naturally follow the condition of their fathers, and succeed all their rights…

The Law of Nations, Book I, Chapter 19, Section 215: Children of citizens born in a foreign country: It is asked whether the children born of citizens in a foreign country are citizens? The Laws have decided this question in several countries, and their regulations must be followed. By nature alone, children follow the conditions of their fathers, and enter in all their rights; the place of birth produces NO CHANGE in this particular, and cannot, of itself, furnish any reason for taking from a child what nature has given him: I say “of itself,” for, civil or political laws may, for particular reason, ordain otherwise…

Murphy had asserted that Obama was eligible to run for the presidency by virtue of the fact that he allegedly was born in Hawaii to one American citizen parent, but de Vattel’s definition of “natural born Citizen” would clearly disqualify him.

Murphy’s constituent asked the following question regarding a difference in the two letters:

8. In the first letter I received from you dated October 5, 2009 (enclosed) you Stated: “Certainly President Obama, born of a U.S. Citizen in the State of Hawaii is a Natural Born Citizen within the meaning of the Constitution”

In the second letter I received from you dated October 22, 2009, you stated: “Certainly President Obama, born of a U.S. Citizen in the State of Hawaii is a Natural Born Citizen.”

(a) Why did you retract in the second letter what you stated in the first: “within the meaning of the Constitution”?
(b)You also State: “Certainly President Obama, born of a U.S. Citizen in the State of Hawaii…” What legal official evidence do you have that will hold up in any Court without a reasonable doubt to prove he was born in Hawaii? Since Barack Hussein Obama Jr. (AKA Barry Soetoro) sealed all of his personal records from the public view. I doubt you have such evidence to prove he was born in Hawaii without any question that would hold up in U.S.court. If you do please send that to me, my attorney would like to see it.

A detailed description of the history and requirements of the term “natural born Citizen” can be found here. 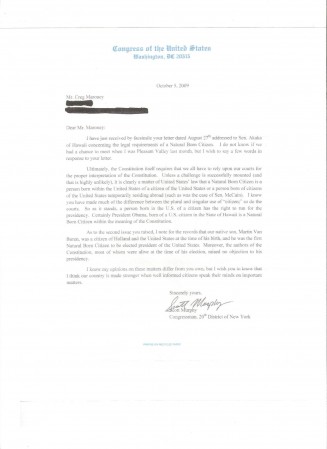 First letter from Scott Murphy to his constituent 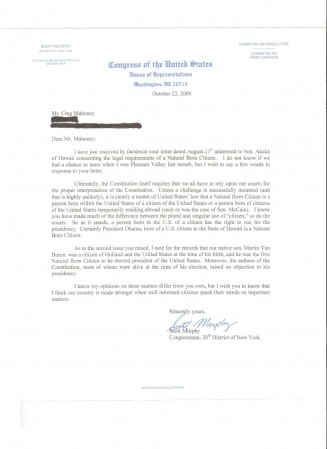 Second letter from Congressman Murphy to his constituent

Congressman Murphy: A case study in feigned ingnorance in service of tyranny added on Saturday, March 13, 2010

10 Responses to "Congressman Murphy: A case study in feigned ingnorance in service of tyranny"