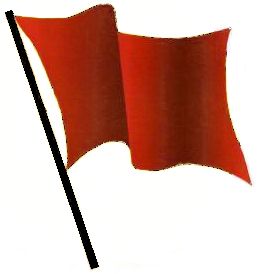 (Jan. 10, 2010) — People are asking how so many terrorist red flags could be overlooked by so many.  The answer is, that they have been overlooked the same way these “birther” red flags were not only overlooked, but ridiculed.

Some examples of these “Birther” red flags can be culled from the public behavior of the Hawaii Department of Health and the Hawaii Office for Information Practices, in response to public inquiry regarding Obama’s vital records, which are an essential documentary issue in establishing his citizenship status, and whether he meets the qualifications of the office of U.S. President, which not only requires that one be a U.S. Citizen, but also a natural born citizen.

1. Hawaii Department of Health Director Fukino made no mention  — until November  of 2009 — of the existence of the DOH Administrative Rule showing that election officials could have received a copy of Obama’s original birth certificate without his permission. The DOH has said they can’t release any records without Obama’s permission. But HRS 338-18(a) allows state laws and DOH rules to govern the disclosure of vital records, and the current rules – Chapter 8b, 2.5(A)(1)(f) – would allow any election officer overseeing the placement of Obama’s name on the ballot to receive a certified copy:

“2.5 Eligibility for Copies of Birth Certificates

A. Standard Copy. A certified copy of the original birth certificate on file with the Department of Health as described in paragraph 2.4B(1) may be issued to:

(1) The registrant, his descendants, his authorized agent, or upon order of a court of competent jurisdiction. “Authorized Agent” means:

(f) A government agency acting on behalf of the registrant to process a financial claim, beneft, award, or other compensation or to transact official business involving the registrant or his affairs.”

Placement of a name on a ballot is an official transaction. The elections officer acts on behalf of the registrant to put their name on the ballot. That’s not a right. There are specific requirements that have to be met. If a person is not a party member they have to go through a petition process in order to complete that transaction. In many states there is a fee for that transaction (I’m not sure about Hawaii on that), which should leave a record. However, whether a State considers itself transacting business on behalf of the candidate, really depends on whether they require such verification by statute and in what manner they verify documents presented in such an application.

2. The DOH has falsely said that HRS 338-18 prohibits disclosure of government processing records. There are two kinds of records: records of the vital events themselves, and records of the government’s handling of those records.

Certificates are the record of the vital events. HRS 338-18(a) says that information about the actual birth, death, marriage, and divorce events may only be released according to the provisions set by law or Department of Health rules, thus referring everyone to the DOH Administrative Rules to see how information on actual certificates may be disclosed and to whom. Far from barring “any disclosure” as claimed by the DOH, current Administrative Rules allow a non-certified abbreviated copy of a birth, marriage, or death certificate to be released to anyone who asks for it. However, a public statement of where someone was born – such as Fukino’s July 27, 2009 statement about Obama – is not allowed by the rules.

All other records are public, except that neither direct viewing nor certified copies are allowed unless the requester has a direct and tangible interest. Hence, non-certified copies, abstracts,  and disclosure of information from the documents are not prohibited, which, according to Hawaii’s “Sunshine Law” (UIPA), means they must be disclosed upon request, except for certain exemptions, such as for information having privacy interest that outweighs the public interest in disclosure:  date of birth, gender, and address.

Since a damaging disclosure of records processing was made in September (see next point), the DOH has been denying access to these records by claiming that ANY DISCLOSURE is forbidden.

3. Though ridiculing “birthers” publicly, the DOH has PRIVATELY confirmed Obama’s online such facts and laws which conclusively show that online images of purported Hawaiian Certifications of Live Birth, ostensibly belonging to Barack Obama, Junior, are forgeries, a fact the DOH has known since the beginning. I say this, because  the processing information for all such vital records, when requested, is subject to disclosure after the fact,  and when one citizen, aware of this, requested such, the DOH was forced in September of 2009 to reveal that Obama’s original birth certificate had been amended and that Obama or his representative has paid a fee to have his certificate amended. This admission was made in the form of a denial on August 18, 2009 to a UIPA request to release such accompanying documents for the amended filing.  According to the OIP Manual, a State Agency can only deny the release of documents which actually exist; if they do not exist, they must explicitly say that they do not exist.

Since all Amendments must be noted on the certificate, an alleged image of an Obama COLB, which does not bear the word “Amended” is a forgery; and since the COLBs bear no such indication, the DOH must have known, this entire time, that both the Factcheck.org and Fight the Smears COLB’s are forgeries.

4. Every government agency in Hawaii contacted thus far has either explicitly denied that they have a responsibility to report known forgery and/or have refused to report suspected forgery to law enforcement. This includes the Department of Health, Office of Information Practices (OIP), Lieutenant Governor’s Office, and every member of Hawaii’s House and Senate. Janice Okubo, the Communications Director of the Hawaii Department of Health, appears to have stated  on Dec. 11, 2009 that law forbids her to disclose ANYTHING about a birth certificate, even if such a certificate is a very public forgery, used as an essential part of a presidential campaign.  The Hawaii Ombudsman’s Office has said they don’t investigate crimes and only report evidence they uncover themselves.  In other words, their philosophy is “See no evil…”

4. The amendment made to Obama’s birth certificate renders it insufficient evidence for legal purposes. Minor administrative errors (such as typos) don’t remove the prima facie evidentiary value of a birth certificate, but such no-fault errors don’t result in a fee, and Obama was charged a fee., according to the Department of Health, when forced to disclose this via a UIPA request.  Legal name changes also don’t affect the evidentiary value, and the Lieutenant Governor’s office, which oversees such records, has confirmed on November 24, 2009, that there has been no legal name change for anyone named “Obama, “Soetoro,” or “Sutoro.”  Hence the nature of the amendment requested must be one which, if not a minor administrative error, alters its evidentiary value.

5. Kapiolani Hospital received a letter signed by Obama on White House stationery and with a raised seal claiming Obama was born there, even though that could only be true if Obama’s amendment contradicted the doctor’s testimony. If he had been born in a Hawaii hospital, the hospital itself would have been responsible for the content on the birth certificate and the DOH responsible for any clerical typos. Obama would not have had to pay for the amended filing.  The only way Obama would be charged for an amendment is if he or his representative claimed to have filled out the certificate himself and erred in doing so, or if Obama claimed the doctor’s testimony was wrong.  Obama was not old enough to file his own birth certificate, however.

6. The DOH has broken Hawaiian law to make rule changes (cf. Western Journalism’s Report, June 10, 2009, Addendum 11) that would protect Obama. In mid-June of 2009, the DOH stated that they will no longer issue long-form birth certificates. This is in direct violation of the current rules  and Hawaiian Law, which in  HRS 91-3 mandates for an open process for rule changes.  This was the first of several such violations within the past year (e.g. , raising of fees and denial of disclosure of documents to verify lawful procedure in raising them was followed: Okubo’s letter of January 4, 2010 to author.)

7. Dr. Chiyome Fukino, Director of the Hawaii Department of Health, stated on July 27, 2009, that Obama’s records verify his birth in Hawaii, but Hawaii law forbids her to conclude that, since all the DOH has is legal hearsay. This is because, according to PHR Chapter 8b and HRS 338-17, only a judicial or administrative person or group can evaluate the accuracy of the claims when an amended document is presented as evidence. Obama has had many, many opportunities to present his birth certificate as evidence in lawsuits. He has refused, even going so far as to rescind military orders rather than to risk a judge seeing his birth certificate. There is no  lawful process by which Obama could present his records to Fukino as evidence for her official adjudication.

8. Having made the illegal statement regarding an alleged Hawaii birth, Fukino refused to obey Hawaii Uniform Information Practices Act, which required her to release the documents on which her statement was based when requested to do so. Several citizens made such requests and were similarly rebuffed. Attorney Leo Donofrio was one of these, and he spoke about this publicly on Blog Talk Radio on Oct. 6, 2009 (22 minutes into said Blogcast).

9. The DOH has deleted documents required to be stored for at least two years. The DOH said on December 11, 2009, that it no longer has the UIPA request  made by TerryK seeking invoices showing  that Obama’s birth certificate was amended; the blanket denial also affirms that they no longer have the said invoices. Yet, the DOH’s own “Rules of Practice & Procedure” say that documents must be stored as long as the case can be contested:  August 2011, in this case.

10. Fukino might be implicated in averting administrative discipline against herself as regards the promotion of the Director of the Hawaiian Office of Information Practices, who was replaced by the attorney who has designed the DOH’s ambiguous and indirect responses. Six days after Attorney Leo Donofrio announced on his blog (naturalborncitizen.wordpress.com) that he would ask OIP Director Tsukiyama for disciplinary action against Fukino and Okubo for their deceptive responses, Tsukiyama himself resigned from the OIP to take a promotion to a company on whose board of directors Fukino sits.  Before leaving, he granted Cathy Takase control of all DOH matters and asked her to replace him.  By the admission of members of the staff of OIP, Takase had previously been in charge of assisting Fukino craft responses to UIPA requests.

Now OIP is leaving HRS 338-18 rulings up to the DOH. All DOH responses which I have seen contain , in my opinion, deceptions regarding numbers 1 and 2 above, including disobeying their own rules for non-certified abbreviated copies of birth, marriage, and death certificates. They deny that documents exist which are required by law, such as descriptions of their forms, procedures, and instructions which are mandated in HRS 91, etc.

This information has been given to every lawmaker in Hawaii, the OIP, DOH, Ombudsman’s office, HI lieutenant governor’ and governor’s offices, Nebraska’s US attorney (who says they won’t take reports from citizens), and Hawaii’s director of the Department of Public Safety, as well as to multiple news organizations. The FBI thrice said they don’t investigate document fraud. All refused to act.