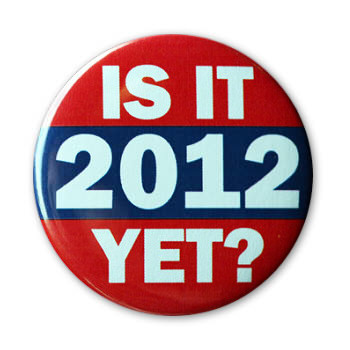 (Jan. 4, 2010)  —  In its Jan. 11 issue and at its website, the ever-liberal magazine Newsweek is setting up the Republican presidential nominee, whomever that might be, for defeat in 2012.   Judging from its slant, Newsweek apparently wants the GOP to nominate Haley Barbour, Bobby Jindal, John Huntsman, Paul Ryan, or Tim Pawlenty.  The prospects of headliners Sarah Palin and Mitt Romney are downplayed.

Mississippi’s Gov. Barbour is the candidate who is apparently most desired as Barack Obama’s hapless foe in the next round.  What an impact the world would feel from a Kenyan-American’s victory over an old Confederate from the Delta who displays in his office a Stars and Bars flag signed by Jefferson Davis!  Oh, how sweet would that be?

Jonathan Darman’s extensive article on Gov. Barbour, entitled “The Anti-Obama,” is clearly an attempt to kick sand in the face of Sarah Palin:

With some tinkering, his [Haley Barbour’s] hypothetical 2008 campaign could be adapted to 2012. While grassroots conservatives adore Sarah Palin, much of the party’s establishment fears and loathes her. In the event that she runs, or even hints strongly at running, some in the party might look for a more clubbable social conservative, like Barbour, to get behind in order to blunt her power.

Fear and loathing for Sarah Palin?  Yes, certainly from the left, but from fellow Republicans?  So pseudo-objective journalist Darman claims without offering any evidence.  Then, Darman warns that if Palin “even hints strongly at running,” powerful GOP forces will back someone like Haley Barbour in order to block Palin.  Sounds as if this is precisely what Mr. Darman would like to see happen.

In a separate Newsweek piece entitled “Predicting the GOP 2012 Presidential Nominee,”  thirteen so-called Republican front runners are outlined, with Haley Barbour, (surprise, surprise)  listed as number 1 and described as “the ultimate insider.”  Next in line are Mike Huckabee of Arkansas and Bobby Jindal of Louisiana.  Jindal may not even be eligible, but neither is Obama, and any of these top three on Newsweek’s list would offer half-black Obama the satisfaction of crushing the Old South.

Fourth comes Sarah Palin, who is presented as unlikely to seek the presidency because she is making good money now from her book Going Rogue and from her speaking engagements and especially because she cannot stand media scrutiny, according to the reliable, trusted reporting of Newsweek:

Palin certainly has followers, and she could do well on a ballot.  But the question still lingers:   Why would she want to?  Trading millions in potential earnings for a paltry government salary seems unlikely to appeal to the former Alaska governor, particularly since the latter would include increased media scrutiny, which Palin has frequently lamented.

Got that, Mrs. Palin?  Being president would be a big comedown for you because of a president’s paltry salary, and besides, you don’t want the media on your case again, do you?  What a smarmy excuse for journalism Newsweek has committed here.  This is how the Mainstream Media shapes public opinion and is attempting to keep Sarah Palin out of competition in 2012.

Mitt Romney is listed as number 6 on Newsweek’s list, but he is brushed off as a lightweight because he has been so quiet lately.  In fact, he has been so deficient that “his reintroduction to voters” would be a big obstacle to his running again, it is said.  However, Jonathan Darman, in his article, found Romney useful for keeping Stars and Bars Barbour in the GOP picture:  “It’s easy to imagine a scenario, for example, in which Republican nominee Mitt Romney, needing to shore up his ties to the conservative Christian base, chooses Barbour as his running mate.”

Got that, Mr. Romney?  Just in case you get the nomination, don’t make Sarah Palin your running mate, go with Stars and Bars Barbour instead.  (Defeating Barbour as VP would still give the liberals a big thrill.)

But liberals seem most keen to use Son of the South, Mississippi Gov. Barbour, to prevent the Republican Party from becoming too conservative, since Barbour seeks a bigger party that is fundamentally the same as in the past.  Haley Barbour expresses his big vision thus in the Darman article:  “People are crazy if they think we win by getting more pure.  We win by getting big.”

Got that, conservatives?  You are crazy if you think you can win.  You can read it in Newsweek, which is always trustworthy and reliable.

Newsweek Setting up Defeat for GOP added on Monday, January 4, 2010

Doug, a native of NH, moved to the beautiful mountains of WV, where he works as a welder in a coal mine and operates a small farm with his lovely wife. He is a no nonsense patriotic country boy who writes out of a sense of duty to man and country. A crack shot, who say’s in regards to the best bait “no self respecting squirrel can resist an acorn.”

2 Responses to "Newsweek Setting up Defeat for GOP"