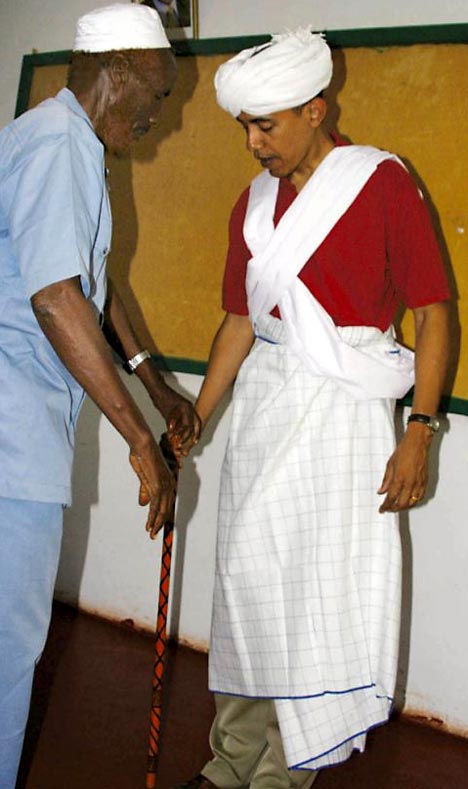 Obama is bound by his family’s culture, in which one always takes a stand with a fellow muslim, against “the infidel.”

(Jan. 2, 2010) — On Christmas Day, 2009, the first of many terror chickens to come, came home to roost when a Nigerian member of Al Qaeda climbed aboard a US commercial flight headed from Amsterdam to Detroit and attempted to set off a chemical bomb mid-flight.

Once again, civilians found themselves in the position of having to provide for their own safety and security as the folks whose primary purpose is to provide for the common defense of the people, came up sorely lacking.

Had it not been for a handful of brave patriots willing to take matters into their own hands, Flight 253 could have ended the futures of everyone on board.

This is what we should expect in a nation that puts its soldiers on trial for taking their oath seriously in the war on terror abroad, while the Obama administration offers known enemy combatants civil rights in criminal courts, by no means designed to handle the complexities of war.

In fact, when the administration sees patriotic American citizens and former military personnel as “potential domestic terrorists” – and known terrorists as mere “criminals,” this is the best outcome we can hope for…

Predictably, Obama was quick on the trigger when taking aim at the agencies responsible for securing commercial flights. As Jim Meyers reports at Newsmax, Obama told reporters: “A systemic failure has occurred, and I consider that totally unacceptable.”

Obama is the “systemic failure.” He and his terror-friendly administration, including US Attorney General Eric Holder, who was engaged in the legal defense on known terrorists before being named the head of the US Justice system by Barack Obama, have great difficulty separating “acts of war” from “criminal behaviors” – and – terrorists from US soldiers or even average American citizens for that matter.

As Meyers points out in his Newsmax report based upon a story in the liberal New York Times, “two federal officials told the paper that U.S. intelligence was aware that a Nigerian Muslim was preparing an attack, yet officials did nothing to give warning of such an attack.”

The paper reported Wednesday: “Two officials said the government had intelligence from Yemen before Friday that leaders of a branch of Al Qaeda were talking about ‘a Nigerian’ being prepared for a terrorist attack.” – “But despite those signals, the administration never raised a terror alert, and would-be bomber Abdulmutallab was allowed to board a plane bound for the United States.”

Gee… I wonder why an administration that sees average citizens as “potential terrorists” and actual terrorists as “common criminals” would hesitate to warn the people of the impending danger that lurks within a nation not at all serious about an enemy just as committed to death and destruction today as they were on September 11, 2001.

We are talking about the same folks who still refuse to admit that our nation is at war with extreme Islam around the globe – that we have numerous terror training facilities right here on American soil – or that the Jihadist in Ft. Hood was in fact an Al Qaeda operative in regular contact with known Al Qaeda cells in Yemen, up until he shouted “Allah Akbar” before killing a dozen unarmed soldiers at Ft. Hood.

Despite the fact that Americans in part, elected Obama on the false belief that Bush and Cheney made America “less safe” by their semi-aggressive “war on terror,” the Washington Times now reports that 85% of Americans now expect terrorist attacks to be successful on American soil in 2010. That’s a cheerful thought full of “hope” for the New Year, huh…

Still, one is compelled to ask why those responsible for making certain that someone like Abdulmutallab is unable to climb aboard a US commercial flight, chose not to do so?

This is the real point isn’t it? Someone “in-the-know” chose NOT to share that information with people who could have and allegedly would have stopped Abdulmutallab from climbing aboard Flight 253. It was NOT an “intelligence failure” like 9/11/01… The guy’s own father reported his son MIA after making direct threats against the west.

He reported it to the US Embassy in Yemen, and there was plenty of time to react, had that information been shared with the appropriate agencies. Why wasn’t it?

While we’re at it, why is our federal government treating American soldiers like “enemy combatants” in military courts while offering civilians criminal courts and US Civil Rights to known enemy combatants captured on the battle field?

And here’s the biggest question of all – Why aren’t American citizens demanding answers to these and many more obvious questions?

In October of 2008, I wrote a column titled Terrorists, Terrorism and Obama and nobody listened. Voters had been convinced by the leftist lame stream press that even a nobody with life-long ties to terrorists, communists and third world thugs, would be “better than Bush.”

I even asked in a column, Who is باراك حسين أوباما ? – Copy and paste this into your Google translator software. If you still don’t know who and what we elected, there may be no hope for you or the future of this once free and prosperous nation.

It didn’t take a Harvard grad to see it coming, but still, few listened. Obama’s entire past remains in hiding almost a year into his unconstitutional presidency.

A year and countless unconstitutional anti-American administrative decisions later, most Americans still aren’t listening and as a result, their future looks grim so long as they fail to ask the right questions and demand truthful answers.

Forget about where Obama may or may not have been born. This is a side show aimed at misdirecting public attention and allowing the global left to pass off all dissenters as nothing more than crackpot conspiracy theorists, while the real conspiracy continues to unfold right under our noses.

Obama is unconstitutional by bloodline. The issue of natural born Citizen is a statement of bloodline, under natural law, not birth place under common law. Obama’s father was at no time a citizen of the United States. Obama inherited his name, his religion and his citizenship from his father.

So ask again – Why are Obama & Co. friendlier towards known terrorists than towards average American citizens simply upset by the current destruction of their free republic?

If you understand that you are asking this question of an Arab-Muslim, not an African-Christian, then you can probably figure out the correct answer all on your own. Obama was born and raised Muslim, not Christian. His so-called “Christian church” in Chicago is actually a “Black Nationalist Church,” which explains the racist rants of his life-long pastor, Rev. Wright.

But if you still think you are dealing with some new age Marxist Messiah planning to unite the world with American assets, then I challenge you to come up with a single acceptable answer to the obvious questions posed in this column.

Only one more reasonable question remains… How insane does it have to get before the American people wake up, take note and take action?

Since 85% of Americans expect successful terror attacks on USA soil in 2010, it’s clear that 85% of Americans understand that we are indeed, still at war with international Islamic terror. So, why did they elect leaders hell-bent upon helping those terrorists succeed?

Now most Americans are able to see the anti-American Marxist “change” Obama had in mind for America. So, at what point do the people awake and arise in defense of this great nation?

I worry that JFK was right about something else – “Those who make peaceful revolution impossible will make violent revolution inevitable.”

Cut off from legislators, ignored by the White House, denied access to the courts and mocked by the leftist press, all peaceful solutions are quickly vanishing. When all peaceful means of redress are exhausted, only violent remedies will remain. Those who have denied the people a peaceful solution will be responsible for the violent solution that follows. I don’t call for it, but anyone who knows Americans well could predict it.

85% of the people are right. We will see successful terror strikes on US soil in 2010 and that’s because the current leadership in Washington DC is committed to that end. Their reaction to the events of 12-25-09 was also predictable.

“It’s becoming clear that the system that has been in place for years now is not sufficiently up to date to take full advantage of the information we collect and the knowledge we have.” – Obama

It’s the new system of terror appeasements and support, both here and abroad, put in place by Obama, Holder and Napolitano which has made terror attacks on US soil inevitable again.

The attempted bombing on Flight 253 from Amsterdam to Detroit has touched off partisan squabbling in Washington. Republicans were sharply critical of Homeland Security Secretary Janet Napolitano after she declared on Sunday that “the system worked,” even though the bombing was thwarted only when Abdulmutallab’s device failed to detonate. (from the Newsmax column)

The Napolitano system failed and citizens were left to defend themselves on Flight 253.

In the days following the Flight 253 event, Al Qaeda leaders warned of 300 more bombers coming and counter-terrorism experts around the globe have placed the risk of massive nuclear, biological or chemical attacks on US soil at a 100% certainty. Only the hour and level of devastation are unknown.

The policies that allowed Abdulmutallab to board Flight 253 will allow countless others to advance their attacks on the US. The Obama military “Rules of Engagement” will cost many more American soldiers their lives, senselessly. Eric Holder’s Civil Rights for Terrorists campaign will set many known enemies of our nation free to kill again… and Americans will die to learn this lesson the hard way.

This is what we can look forward to in 2010. 85% of Americans know it and thanks to the 15% who don’t, all Americans will pay a heavy price for the decision of the 52% who put these folks in unbridled power.

Is it all just an accident, or does it all serve a “greater good?” You decide how the evidence adds up, but decide soon. The clock is ticking…