INTERNET RUMOR THAT DOBBS IS NOT A NATURAL BORN CITIZEN, JUST THAT 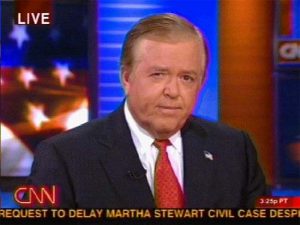 (Nov. 26, 2009) — There is an internet rumor going about that Lou Dobbs, potential presidential candidate in 2012, and former CNN news anchor, is not a natural born citizen.

The author of the rumor is an anonymous commenter, quoting an “academic.”

This is not the first time that Dobbs’ lineage has been under fire.  Ever since his comment on live television on Wed., January 16, 2008, that he did not care who his grandparents where, genealogists have wondered at his ancestry.

One Obama supporter even put out a fake Dobbs birth certificate, replete with missing filing number and an asterisk on the place of birth, with a footnote indicating he was born in Mexico.

Internet site with reliable information, however, confirm that Louis Dobbs was born in Childress, Texas, in 1945; the son of Frank Dobbs and Lydia Mae Hensley.

An archived file from USGenWeb, from the year 2000, which contained Index data from the Texas Office of Vital Statistics,  confirms that Louis Carl Dobbs was born in 1945 in Childress county, Texas, as one of the 288 children born that year.  The vital event bears a date of September 24, 1945, and indicates the child was a boy.

The allegation that Lou Dobbs mother was British and that therefore he is not a natural born citizen seems unfounded.

The surname Hensley originates in Great Britain, but families with this surname have lived in Texas for more than a century.  In fact there is a Charles Golden Hensley, who was killed in London, Texas, in 1892, whose mother was named Lydia.  Seeing that women’s names often pass down from their mothers, Dobbs mother could have been a near relation to Charles Hensley. The name “Mae” also appears associated with the Hensley families in Texas, according to another post at Geneology.com.

It seems in all likelihood that the rumor is baseless.

Those with access to Ancestry.com might be able to find more information, as there is a page on the Hensley family there.