(Feb. 4, 2021) — If you’ve ever filled out a Form 4473, you’re familiar with the Question 11e: “Are you an unlawful user of, or addicted to, marijuana or any depressant, stimulant, narcotic drug, or other controlled substance?” In case you thought there was any ambiguity with regard to medical marijuana, you were wrong. Indeed, there is a warning in bold right underneath the question that clarifies:

“Warning: The use or possession of marijuana remains unlawful under Federal law regardless of whether it has been legalized or decriminalized or for medicinal or recreational purposes in the state where you reside.”

Regardless of what one thinks about marijuana, its legalization or the right of the federal government to regulate either drugs or the internal laws of the various states, the fact remains: As of now, possession, sale and cultivation of marijuana remains a federal offense. It is a Schedule I drug in the same category as heroin and cocaine. You might not like that and you might think such classifications are ridiculous. The federal government doesn’t care.

This is a particularly difficult issue for people who use medicinal marijuana for bona fide medical purposes, rather than as a sort of legal loophole to consume marijuana legally. Many people use medicinal marijuana for a variety of purposes including relief from pain, Alzheimer’s symptoms, glaucoma, epilepsy and a number of complications related to cancer, including nausea and lack of appetite. The science on this is rather conclusive, so much so that Big Pharma makes legal synthetic THC pills known as marinol.

What Is the Law Regarding Guns and Marijuana? 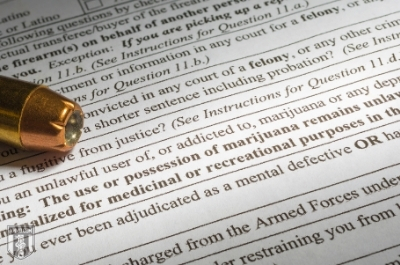 In 2011, the Bureau of Alcohol, Tobacco and Firearms clarified its stance – it is not legal for anyone who uses any illegal substance to own firearms. This includes marijuana, which is legal according to some state laws, illegal according to others, and also illegal under federal law.

The relevant federal law is 18 U.S.C. 922 § (g)(3), which prohibits anyone who uses any controlled substance, as defined by the Controlled Substances Act, from owning firearms. It’s not specific to marijuana. It includes every controlled substance. However, marijuana is worth talking about specifically because of its quasi-legal status, including in a number of relatively gun-friendly states such as Arizona, New Hampshire, Colorado, Michigan, and Nevada.

It’s easy to be cynical about the motivations of the federal government with regard to this topic. However, it is worth briefly noting a couple of facts regarding marijuana with regard to mental health. Marijuana is closely associated with a number of psychiatric disorders, including schizophrenia, but also anxiety, paranoia and even psychosis, though the last of these is quite rare. One might wish to hand-wave this as “reefer madness,” but the correlation if not the causation is well documented.

One might object that those with SSRIs are allowed to legally possess firearms, despite the fact that these have been proven to be dangerous. We don’t disagree that there is a correlation between SSRI use and abuse and gun violence. However, SSRIs being dangerous – or even more dangerous than marijuana – does not make marijuana any less dangerous than it is.

In the interest of balance, we’ll end this section by noting that correlation is not causation. Some have argued that it’s less that marijuana causes schizophrenia than those who have schizophrenia are more likely to use marijuana as a form of symptom relief. We will not attempt to decide which hypothesis is true, but the facts regarding marijuana and mental health bear mentioning.

What Are the Penalties for Ignoring the Law?

We are not encouraging anyone to break the law. And, indeed, the penalties for doing so with regard to firearms are always stiff. Using and possessing marijuana are no exceptions. So what are the penalties for those who simply choose to flout the law and continue using marijuana – legal or otherwise, because remember that the feds don’t recognize the difference – while owning firearms?

First, we should mention that some states, such as Colorado, have prohibited information sharing that would tie your ownership of firearms to your status as a medical marijuana patient. Other states, such as Illinois, have ruled that you can legally own firearms as a medical (or otherwise legal – Illinois is a recreational state) marijuana user. Illinois is not the most gun-friendly state in the Union by a longshot, but it has explicitly said that it will not assist the federal government in stripping otherwise law-abiding citizens of their firearms while also providing them with the same friendly warning that we will throughout this article: that the feds still consider it a crime, so be careful.

But again, the federal law is what is most important for our purposes right now. And the federal appeals courts have upheld bans on medical marijuana users from legally possessing firearms. What’s more, even states that are friendly to medical marijuana have not taken a clear stand on what will happen to people who are stopped in possession of legal firearms and a legal amount of marijuana.

There are two parts of the law here: First, the question of what will happen to you if the feds show up and you have marijuana and a firearm. The second is the question of what will happen if the feds decide to hit you for lying on your form – a lesser, but still serious charge. Neither situation will play out well for you: The federal penalty for being in possession of a firearm, while also in possession of illegal drugs, is ten years in the federal pen. The federal penalty for lying on your Form 4473 is five years in prison.

It’s worth pointing out that if you’re guilty of one, you’re probably guilty of both, so let’s just call that 15 years. And while Jeff Bezos’ left-wing vanity blog The Washington Post has stated that “Your chances of being prosecuted by the Justice Department for falsifying information to illegally buy a gun are almost zero,” no serious person would advise you to lie on your form. This is illegal and a highly risky gambit.

Still, facts are facts and numbers usually don’t lie: The NICS system denied gun purchases 112,000 times in 2017, because they were in forbidden categories. Of these, the ATF investigated 12,700. Of these, a whopping 12 were prosecuted. However, Attorney General William Barr has stated that the feds plan to investigate and prosecute so-called “lie and try” cases with increased vigor, so we might see more prosecutions in the future.

Note that it is not just marijuana users who might fall afoul of federal authorities because of this: literally anyone involved in the cultivation or distribution of medical marijuana is engaged in a federal crime. Thus, they are subject to being penalized in the same way that any other drug user – or drug dealer – might be. Further, all of these laws apply not just to guns, but to ammunition as well.

Again, we cannot state this clearly and unambiguously enough: Purchasing a firearm while using illegal drugs, of which even “medical marijuana” is one, is a federal offense carrying serious penalties, and we obviously urge anyone considering ignoring the law to not do so. The feds are not joking around with people that they prosecute for these crimes.

If you take umbrage at this legal situation, we urge you to contact your state legislators, particularly those who might be on record as sharing your views on the matter. There is a growing movement in America’s state legislatures to protect medical marijuana users who wish to peacefully exercise their Second Amendment rights.