You Caused It. You’re Guilty. Shut Up and Comply 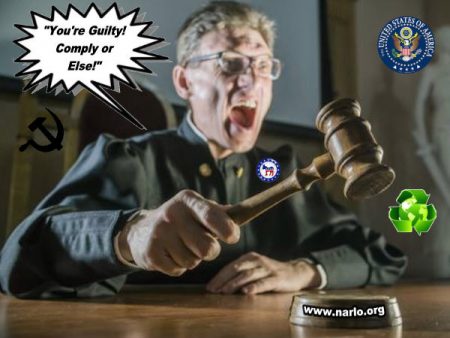 “Yep.  You Caused It.  You’re Guilty.  Now shut up and comply!”   No, you’re not guilty.  Where are the American mavericks that will tell the judge, jury, or government to go to hell?

Of all the emotions that control human behavior, guilt, fear and anger are the most destructive.  Guilt can make us change our behavior for the better or worse.  Fear can stop us in our tracks.  Anger can make us act in an uncontrollable manner, where reason, logic and common sense are absent.  Government has mastered the use of guilt, fear and subterfuge to manipulate and control the people.

In the late 1920’s President Hoover retained the University of Chicago and Harvard University to conduct a study on how to manipulate the masses through their subconscious minds.  Both universities were at the top of the curve in studying social studies and industrial psychology to determine a “satisfactory structure for society.”

The Rockefeller Foundation was supposed to have funded the study since John D. Rockefeller was the founder of the University of Chicago.   The Rockefeller Foundation was up to its neck in funding psychological studies and creating organizations to work with universities and government for the purposes of controlling how the government works, employee work standards and planning public policy initiatives like the New Deal and Social Security.  George Soros is doing the same thing today.

All this work by Rockefeller, the universities and the government was the seed of a growing and powerful centralized government.  The Great Depression was just the emergency that the Progressives were looking for to increase federal government control of America and its citizens and to create a “satisfactory structure for society,” socialism.  The American people were never asked if that is what they wanted.  FDR just did it!

World War II was the next emergency used to subjugate the American population even though it was a necessary evil.  The Coronavirus of 2020 was the third major emergency that opened the door to rapidly-increasing federal government and state control of the people.  There have been many small emergencies since the Great Depression that have accomplished the same thing.  Even before, the 16th Amendment from 1913 was a form of manipulation and control.   Americans are heavily manipulated, controlled, regulated, directed and subjugated but they don’t seem to be aware of it, much less care.  Today’s society is a far cry from what the Founders envisioned.

Why would a just government, built on constitutional principles, want to manipulate or control the people of a free country through their subconscious minds?  The answer is abundantly obvious.  The last thing that a powerful central government needs is individuals thinking independently for themselves, proclaiming they are free and resisting government intervention in their lives.  The first thing that totalitarian or strong centralized governments do is to corral the independent thinkers, take their livelihoods and guns away, lock them up, starve them, or re-program them to be compliant government robots, as the Chinese Communist Party is doing to the Muslims of Western China and what Stalin did to the people of Ukraine.

The reader may ask, “How is the government manipulating and controlling me?”  They are doing it in so many subtle and not-so-subtle ways, from birth to death.  Most Americans are totally unaware that they are being controlled and manipulated.

And it is not only government that is trying to manipulate you.  Every single TV advertisement you see is an attempt to manipulate you and get you to buy their product, with a barrage of one-half-second hypnotic images.  When the ad says you will save “X” number of dollars, it is a lie because you aren’t saving anything.  The price is the price.   The alleged “saving” is a mirage to con you into thinking you are getting a better deal.  And don’t forget the small print at the bottom of the ad where all the negative stuff is contained.  There is no way that anyone could read the ultra-small print in the time frame the ad is aired.

But the worst manipulator is the government.  Public school socialist, environmental and one-world-government indoctrination is manipulation of the worst kind because it is aimed at our most impressionable and vulnerable in our society, our children.  Children have no defense against brainwashing by government and special interests unless their parents intervene.  Sadly, after three generations of indoctrination, the parents have been just as brainwashed as their kids so they see no need to intervene.

America’s public school system is designed to force-feed a Progressive (socialist, environmental, one-world) agenda down their pretty little throats and make them compliant to whatever the government wants or demands.  “Yes, master!  Whatever you say, master!”  It’s disgusting!

Then there is the “Climate Change” fraud, alias, man-caused global warming.   One only need Google “Climate Change” to find out how government, academia and social media have manipulated and propagandized the subject.  All of the articles in the first three or four pages that Google identifies are designed to squelch any climate deniers even though there are mountains of credible scientific studies and peer-reviewed papers that disprove man-caused global warming.  You won’t find those studies and papers on Google or in your local newspaper.  But you will find them at this link:  (See “Climate”).

Climate change propaganda is everywhere.  It is in our schools and colleges.  Our kids are brainwashed in it.  The news media echoes the climate change mantra incessantly. It appears in hundreds of National Geographic documentaries.  Forest fires are being blamed on climate change.

Corporations have even jumped on the bandwagon.  Amazon just named the new hockey arena in Seattle “Climate Pledge Arena” and has allegedly pledged $2 Billion to be net zero CO2 emissions by 2040.  It is purportedly buying 100,000 electric delivery vehicles ….. with electricity supplied by fossil fuels.

The planet may be warming but man’s contribution to global warming (CO2) is negligible as compared to the other elements that control climate, such as the Sun, cloud cover, radiation, water vapor, the earth’s tilt, wobble and orbit, distance from the Sun, volcanic eruptions, forest fires, ocean currents, etc.  There are so many variables controlling climate it is virtually impossible to accurately model and predict that man is the cause.  (See: “3.4% x 3.62% x 2%”)

Why does government want to con you about Climate Change?  So that they can manipulate and control your behavior and extract huge sums of money from you to fix a problem that man didn’t cause.  It’s never about the environment.  It is always about power and control.  If you don’t believe their propaganda and lies, they do everything in their power to discredit you.

We used to be a nation and people of innovation, invention and ingenuity.   But almost everything we invent now or want to build to improve the human condition or provide a product that serves a need is either restricted beyond profitability or a law is passed to make it illegal.  Now everything is about conserving or doing without.  Clean nuclear and hydro power are off limits.  Building dams that provide electric power, irrigation and flood control are a no-no but tearing down dams is all the rage.  What for?  So that Indians, a very small minority, can increase their 50% share of the salmon catch. But building taxpayer-subsidized, inefficient wind and solar farms is OK.

Unfortunately, most Americans have depended upon and given in to government for so long, they have forgotten how to do for themselves and have abdicated their right to freedom.  They have become pawns and slaves without even knowing it.

They have allowed our borders to be overrun by illegal aliens who we taxpayers have to fund, but remain quiet. The people have allowed government to nationalize their health care without a whimper.  They have allowed three major social media companies to dictate political discourse and censor conservative ideas but do nothing to stop it.  They have given in to the loss of their freedoms to almighty government and special-interest groups that hold no allegiance to individual freedom and unalienable, God-given rights, much less the Constitution.  For the sake of a few pieces of silver they have prostrated themselves before government and bow to its supreme power.

The people have been told that they are guilty of just about everything and therefore must comply with all government edicts.  They are scared to death by government and environmental or public health pronouncements of dire consequences if the people don’t capitulate to government mandates.

As an 83-year old American, we stand in disgust of what we see and what millions of Americans have become.  At one time Americans were fighters who gave birth to freedom, tied two oceans together with the iron horse and tamed a continent.  With uncommon courage and at great sacrifice they won the freedom for over a billion people in two world wars.  Americans are a generous people beyond a fault.

But we have become weak and docile, anxious to avoid a fight, even if that fight is brought to our doorstep, as it is today in cities all over America.  Now we engage in drug and alcohol dependency and contemplations of suicide.  Many are wracked with depression.  We watch senseless nonsense on our TV and movie screens.  Because of our distractions and fear, we won’t lift a finger in our own defense or the defense of freedom itself, even while the socialist enemy is pounding on the front gate with designs to relieve us of our life, liberty and property.

There is nothing in nature or the law that says we have to bow down to self-induced or compulsory enslavement.  The only answer to the approaching loss of freedom is REBELLION ….. on a massive scale.  But do enough of us have the courage, or is this author just blowing into the East wind without effect?

Ron Ewart is a nationally known author and speaker on freedom and property rights issues and author of his weekly column, “In Defense of Rural America“.  For 14 years Ron has been the president of the National Association of Rural Landowners (NARLO) (www.narlo.org), a non-profit corporation headquartered in Washington State, acting as an advocate and consultant for urban and rural landowners.  Ron can be reached for comment at the following e-mail address: mailto:r.ewart@comcast.net?subject=comments

You Caused It. You’re Guilty. Shut Up and Comply added on Sunday, September 13, 2020

4 Responses to "You Caused It. You’re Guilty. Shut Up and Comply"