U.S. Senator Kamala Harris is NOT a “natural born Citizen” of USA – NOT Eligible to be President and CinC or VP

“HARDLY WHAT THE FOUNDERS INTENDED” 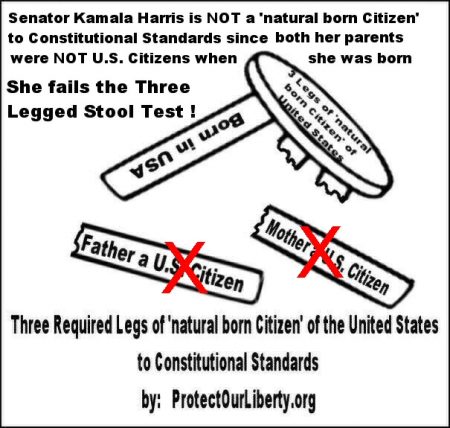 (Jul. 23, 2020) — Both of Senator Kamala Harris’s parents were not U.S. Citizens when Kamala was born. Kamala Harris was born to a Jamaican Citizen father (minus one stool leg) and to a Citizen of India mother (minus the 2nd stool leg).

Senator Kamala Harris’s staff has refused to answer any questions regarding the citizenship status of her parents when she was born. The normal path to becoming a naturalized U.S. Citizen takes five years. Kamala Harris was born in 1964. Her father emigrated from Jamaica to the USA in 1961. Her mother emigrated from India to the USA in 1960. Thus there was not sufficient time for either of Kamala’s parents to become naturalized U.S. Citizens. Kamala’s father eventually became a naturalized U.S. Citizen per his bio. It is not known at this time if Kamala’s mother ever became a naturalized U.S. Citizen. She moved to Canada with Kamala when Kamala was about seven years old. It is possible that Kamala’s mother might have naturalized at some point as a Canadian citizen. Kamala Harris’s mother is now deceased. As I said in the first sentence, Senator Harris is not being transparent on this issue and her office staff has refused to answer any questions on this subject. Given Kamala Harris’s year of birth, and her parents emigration years, she was born in the USA to two foreign nationals and thus inherited their respective birth nation’s citizenship when she was born, in addition to being a basic Citizen by being born in the USA to aliens legally domiciled here. Thus Senator Kamala Harris was born with citizenship and required allegiance at birth to three countries. This is hardly what the founders and framers intended when they selected the “natural born Citizen” requirement for the person who would in the future be permitted to be the President and Commander in Chief of our military, once the founding generation was gone.

As per ‘Principles of Natural Law‘ in place at the time of the founding of our country and when the founding documents including the U.S. Constitution were written, a ‘natural born Citizen’ is one born in the country to parents who are both Citizens (born Citizens or naturalized Citizens) of that country when their child is born in the country. See ‘The Three Legged Stool Test‘ for a graphic presentation of this constitutional requirement as to who can be President and Commander in Chief or our military. See the Euler Diagram shown to the right for a logic diagram presentation of this constitutional requirement.

U.S. Senator Kamala Harris is NOT a “natural born Citizen” of USA – NOT Eligible to be President and CinC or VP added on Thursday, July 23, 2020

7 Responses to "U.S. Senator Kamala Harris is NOT a “natural born Citizen” of USA – NOT Eligible to be President and CinC or VP"