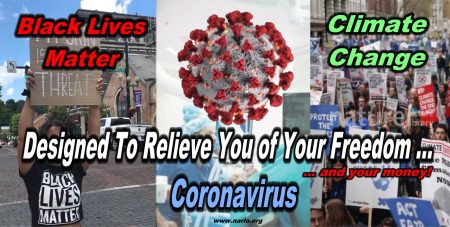 (Jul. 11, 2020) — “Hollywood (and government too) is largely about scammers and con men.  It was my main livelihood for about 25 years, and the scams were beautiful and ugly, cheap and expensive, but, wow, were there a lot of scammers.”     Ben Stein, writer, lawyer, actor and comedian

Both Hollywood and government have been designed to rob you of your money in return for questionable entertainment or mostly substandard services.  Government goes one step farther and works diligently to rob you of your freedom.  They have been at it since the ink was dry on the Constitution, as ratified by the Congress in 1788, over two centuries ago.

Within ten years of the ratification, President John Adams convinced Congress to pass the Naturalization Act, later to be known as the Alien and Sedition Acts.  The Act gave broad powers to the president to deport any alien in peacetime.  “The Sedition Act gave President Adams the power to define treasonous activity including any false, scandalous and malicious writing.  The intended targets were newspaper, pamphlet and broadside publishers who printed what he considered to be libelous articles aimed at his administration.”    (source: history.com)

President Woodrow Wilson did virtually the same thing that President Adams did by requesting the Congress to pass the Espionage Act in 1917, which it did.  The Congress followed up with an amendment to the Espionage Act and called it the Sedition Act in 1918.  The Sedition Act was later overturned by the high court in 1921.  The Acts severely restricted freedom of expression, mandating that public criticism of the military or the government be punished by a $10,000 fine and up to 20 years in jail, the First Amendment and civil liberties be damned.  Nevertheless, the Espionage Act is still in effect today and can be used to prosecute individuals who “leak” classified or confidential government information to the press.  Unfortunately, most illegal leaking to the press is seldom if ever prosecuted.

The list of actions by government to relieve Americans of their money and freedom is voluminous and too many to mention here.  Some of the more prominent actions include the 16th Amendment, which gave us the Federal Reserve and the Internal Revenue Service; FDR’s removal of the gold standard, Social Security and the New Deal; President Johnson’s Great Society and Obama’s ObamaCare.  This doesn’t even include a long list of judicial actions and U.S. Supreme Court decisions that further diminished constitutional freedoms.  Added to this list are the massive regulations to control the environment at the expense of constitutionally protected property rights and direct violations of the 5th Amendment.

THE FRAUD OF CLIMATE CHANGE:

In spite of the volumes of credible scientific papers taking the air out of the Climate Change (CC) tires, government and environmentalists, national and international, continue to push this fraud down the throats of the masses, forcing them to pay billions and trillions of dollars to reduce the global temperature by 3.6O F (2O Celsius), (Paris Climate Agreement) based on the questionable output of computer models that can’t even predict past or current weather conditions, much less future ones.

Climate Change propaganda and the CC con game is endless.  It is in our schools and colleges.  The news media parrots the lie day in and day out.   It’s laced throughout television nature documentaries.  Corporations are even getting on the CC bandwagon and perpetuating the fraud in their advertising.  Amazon is re-naming the revamped Key Arena sports stadium in Seattle.  The new name will read “Climate Pledge Arena.”  Little children are emotionally brainwashed with CC guilt and fear and spout the mantra to their friends and parents.

What is the purpose by government to elevate this con to an international crisis, behavioral control of the planet’s human population?  The net effect is to steal the people’s money and put them in chains based on a fraud.   (See “Climate”)

Then there is the Coronavirus con.  Governments, all across the world, couldn’t wait to lock people up in their homes and violate two of the most basic human rights, the freedom of movement and free choice.  The U.S. Government literally repealed the 1st Amendment and replaced it with the alleged absolute right of government to force people to stay in their homes under the super law called “Public Health and Safety” that allegedly takes priority over all other law.  Even though the government put out endless conflicting reports about virus transmission, treatment for the virus, social distancing, protective equipment, masks and other so-called science-driven prognostications and guidelines, being good little compliant robots, the American people complied with the orders almost without a whimper or a question.  Businesses are going bankrupt by the tens of thousands, never to return.  Economic losses are staggering and have never been this bad in modern times.  Whole industries have been wiped out.  The Constitution has been repealed.  Where is the defiance to government corruption?  Where is the rebellion to government tyranny?

This is what Black Lives Matter (BLM), protesting against alleged police brutality and racial injustice, has given us, besides the violence, looting and arson.  They have managed to intimidate politicians on both sides of the aisle, the news media, academia, corporations and the people into giving in to most of their demands.  The BLM con has turned the police into villains.  (See: “Let The Cops Do It.  Oops!  The Cops Are Gone.”)

Corporations, in acts of massive pandering to bullies, have handed over millions to BLM organizations, giving them immense political power to protest, recruit and lobby government.  Huge increases in BLM’s war chest and tacit approval of their actions by politicians and others has emboldened them and given them even more power.  House Speaker Nancy Pelosi, a Democrat, said when questioned about BLM violence, “People will do what they do” as an off-hand approval of BLM violence.

BLM wants to de-fund the police and Immigration and Customs Enforcement (ICE).  They want no new jails built and they want to end cash bail.  This is where you commit a crime and the police let you go without making you pay bail money to make sure you appear for your court date.  BLM wants to decriminalize prostitution.  They want to get rid of the nuclear family.  They want police-free schools.  That will make school shooters happy.  They want all charges against protestors and rioters dropped.  The Mayor of Philadelphia did just that.  They want to stop the policy of “stop and frisk.”  They want to ban the police chokeholds, a necessary offensive maneuver by police to subdue a physically violent suspect.

But worse than all this, they have turned government against white Americans to placate BLM.  Some cities have actually sat their white staff down and told them to be less white.  That is exactly what the City of Seattle did to its white staff in June of 2020.

Can you imagine the outcry if a city government sat the black staff down and told them to be less black?  All h*** would break loose.  The media would go bananas.  Democrats would become apoplectic and call for investigations.  Petitions would pop up calling for the recall of the mayor and city council.  Demands for their resignations would ring out across the land.  ANTIFA and Black Lives Matter rioters would go on a nationwide, shooting, looting and burning rampage.

On June 12, 2020, the same day that protestors took over a section of Seattle’s Capitol Hill, the Seattle Office of Civil Rights called all white staffers to a two-and-one-half-hour training session on how to be less white.  They were told they would have to give up their objectivity, individualism, intellectualization, comfort and perfectionism.  Objectivity is the foundation of logic, reason and science.  Individualism is the cornerstone of freedom.  Perfectionism is the motive to the betterment of our lives and the drive towards worthy achievement.

They were told they would have to give up their land.  They were told that whites are guilty of superior justification, self-righteousness, fear and shame on how they treat other races.

Why do white people put up with this?  (“White People Built America”) Instead of sitting there and taking this socialist, racist drivel (of course it’s racist), the white Seattle staffers should have walked out of the session en masse.  Tarred and feathered would be an appropriate punishment for city supervisors embarrassing and intimidating white city employees because of their skin color.

Don’t you get the irony?  Blacks (14% of America’s population) can terrorize neighborhoods and businesses with violence, looting and arson and get politicians to pass laws just for the black race while demeaning and vilifying the white race (72%).  That’s racist!  But the rest of us sit on our collective behinds and say we can’t do anything about it while sticking our heads in the sand and running for cover from the violence.

Black Lives will Matter only when black lives matter to black lives.  They kill each other at unprecedented rates.  Black-on-Black crime in the black communities is much higher than general crime in other communities.  Chicago is a glaring example.  The family unit in inner cities is in tatters.   Their education level for an advanced nation is an embarrassment.  Young black males under-perform in almost all learning disciplines as compared to all females and other races.  Nevertheless, they want to drag the rest of us down to their level by intimidation through tribal violence.  Their game is an outright, in-your-face con.  Unfathomably, we are bowing to the con and letting them win because of a society and media-driven myth that all whites are racists.

What happened to the Americans who gave birth to freedom, tamed a continent and created the most prosperous, creative, industrious and generous nation on earth?  Did we somehow breed courage out of them and leave them quivering in fear?  Will Americans hide in their houses until the jack-booted thugs and bullies come for them, as the Nazis did to the Jews in Germany?  If they do, it will be too late to take back America from the government socialists and the Black Lives Matter anarchists, and only outright war will vanquish the bullies. Why do you suppose millions of Americans are buying guns?

Man was born with intellect, reason, logic, commons sense and the insatiable drive to be free that has made him the top of the food chain on planet earth.  Nevertheless, his claim of mental superiority in the face of advancing socialist bullies like Black Lives Matter, world pandemics and the fraud of Climate Change is hollow indeed.  One wonders, if man will succumb to these three cons, to what else will he succumb?  The list is long.