The Irrational Emotion and Radical Idealism of the Young 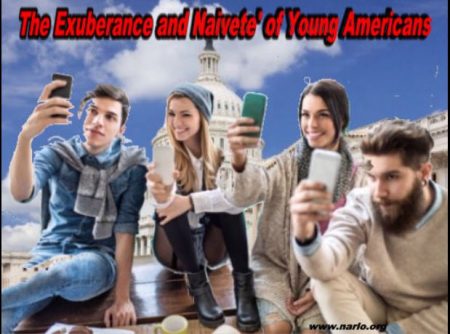 (Jul. 5, 2020) — “The same teen who can’t legally operate a four-wheeler in a workplace environment, can operate a jacked-up F-250 pickup on a crowded urban expressway.  By denying these opportunities to bring value to their own lives and the community around them, we’ve relegated our young adults to teenage foolishness.  Then as a culture we walk around shaking our heads in bewilderment at these young people with retarded maturity.  Never in life do people have as much energy as in their teens, and to criminalize leveraging it is certainly one of our nation’s greatest resource blunders.” — Joel Salatin, from “Folks, This Ain’t Normal”

One of the great quotes that came from the movie “ForRest Gump” was “Stupid is as stupid does.”  It covers a multitude of situations and none more so than the many times irrational behavior of the young, driven by seemingly boundless energy and a total lack of direction, sound judgment, ethics, or experience is on display.  Such behavior bears all of the earmarks of a heat-crazed, brain-fried cockroach on a hot skillet.

Each human is born into a swirling soup of parents and parenting, economic conditions, political leanings, DNA, friends, education, individual experiences and inexplicable behavioral quirks. What comes out of that soup is a realm of infinite possibilities and outcomes.  Even so, the possibilities and outcomes are statistically predictable, especially for the age group of 12 to 30.

The teenager to young-adult mind is more easily susceptible to wild causes, radical idealism and peer and gang pressure.  They quickly fall prey to propaganda, dressed up in the camouflaged trappings of an alleged truth like climate change and systemic racism by whites, or the push to “fix” some injustice, or the righting of some egregious wrong.  Without compunction, intellect, reason, logic and the judgment that comes from experience, they are like putty in the hands of unscrupulous con men or evildoers (or politicians) who maliciously exploit them.  They have no compunction about bringing harm to others in furtherance of a cause, worthy or not.  Blacks are more likely to be drawn into both crime and violent protests due to the breakdown in their family structure and the pitiful attempts to educate them in substandard public schools.

The teenager to young adult is more likely to be involved in peaceful or violent protests, as we have witnessed in the past several weeks.  They are more likely to be perpetrators of violent crimes.  They have a greater chance of ending up in jail from property crimes, drug use or drug peddling, or murder. The following graph lays out clearly the age vs. crime relationship: 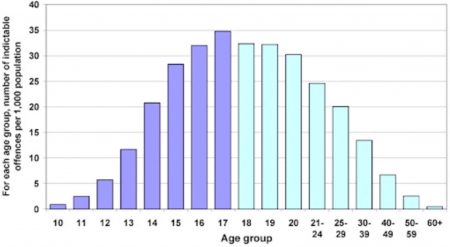 Unfortunately, in 2020, the timing of the Coronavirus, the economic shutdown and the killing of a black man by a Minneapolis policeman provided the perfect storm that led to a national wave of irrational ANTIFA and Black Lives Matter protests and wanton violence, with little to no consequences for the perpetrators.   Even worse, politicians and pundits from both parties tossed off the violence by outright approval, or acquiescence, apathy and silence.  But of course, the violence was for a good Democrat cause ….. systemic racism in America, whether true or untrue.  It made no difference.

The attendees to those protests were the teenager to young-adult age group and most were Democrats or had socialist leanings.  The large preponderance of these “kids” are without jobs and have been raised rich, spoiled and pampered.  Early parental discipline was lacking or non-existent, fathers missing from the family, and the teaching of the normal values of honesty, morality, integrity and work ethic were absent in their upbringing.

The public school system is and was of no help, either, since the American public school system has become indoctrination centers for collectivism, socialism, radical environmentalism and one-world government.  Reading, writing and arithmetic learning are loaded with social justice and politicized by the Progressive ideology.  Discipline of students is highly regulated or outlawed altogether.  The principles of freedom, individual responsibility and property rights are down played as tools of “white privilege.”

The current parental and the public school environments have done nothing to aid in the development of well-adjusted, mature, clear-thinking adults who will later become our leaders and political representatives of the next generation.

Due to willful neglect and psychological mumbo-jumbo, the very attributes of morality, integrity and personal responsibility that hold a nation together and keep it from collapsing are evaporating from our culture.  Debauchery and immorality are an overriding theme of our entertainment.  The divisions between different constituency groups grow wider and wider.  Manufactured white racism has thrown an irreconcilable monkey wrench into peaceful co-existence between the black, brown and white races, aided and abetted by the news media, academia, politicians and bureaucrats.

Political power and the lust for money take precedence over principle.  Corruption runs rampant throughout our institutions.  Lying and propaganda support and give credence to the corruption.  Honor is replaced by want and greed.

All this has occurred because we have lost sight of what is truly important in life.  We have sacrificed our young on the altar of expediency and irrational intolerance.  We have failed to instill the principles of a strong work ethic and personal responsibility in our precocious and impressionable young.  We have neglected our responsibility to teach our offspring about the foundation of our freedom.  Our nuclear family is disintegrating before our eyes, divorces are too high and there are too many fatherless families.

This is why there are so many young adults in the crowds that walk our streets at night in violent protest against the phantom of racism, or whatever other cause celebre of the moment.  The hard truth is, the nation’s young haven’t been spanked enough when they were growing up.  Spare the rod and create a criminal!

What is the answer?   Like so many problems, the answer is fairly simple.  Take every kid, at the age of 18 (boy or girl) and send them to a two-year boot camp in the military service.  When they come out of service they will have been given the discipline and responsibility that will make them mature college students, or disciplined plumbers, electricians, or carpenters, or find a career in the military.

In effect, the military will have given them what they should have been receiving from their spoiled, work-obsessed parents.  It may even give them a worthy direction to pursue.  If, as a nation, we did this, there would be a lot less protesting and violence in the streets by stupid kids, being led around by the nose by unscrupulous actors (and politicians) who exploit them for unconstitutional, socialist and insane agendas such as climate change, free college tuition, forgiving college debt, Medicare for all, open borders, health care for illegal aliens, repealing the Electoral College, tearing down statues, erasing our history and the economy-killing Alexandria Ocasio-Cortez’s Green New Deal.

What we are witnessing on America’s streets today is the all-too-common “Irrational Emotion and Radical Idealism of the Young.”  It doesn’t have to be that way.  We, as parents and as a society, let it get that way by neglect and a false ideology that perpetuates groundless tolerance for abhorrent behavior.

One wonders if we have the will to fix it, or fix any of the other issues that threaten our free nation that we have addressed in previous articles?

Most cultures collapse from within.  Is America next?  Must we fight another revolution to restore the principles of freedom and repair the fabric of our once-exceptional nation?   Or, do we fail our children, let America collapse and let the chips fall where they may without understanding what the collapse of America will mean to the peace, security and tranquility for Americans and the rest of the world?

But then so what?  Who cares?  Right now there are not enough Americans who care and are willing to make the sacrifices necessary to convince the other side, by whatever means, that their ideology is flawed and the direction they are taking the country will eventually lead to economic, cultural and social collapse, or even worse ….. war!

Is massive civil unrest or REBELLION the answer before war is the only solution?  Must millions of Americans start wearing guns on their hips to make the point that ANTIFA and Black Lives Matter violence will not be tolerated because the politicians and law enforcement are giving it a pass?  Must law-abiding citizens take the law into their own hands to retake the streets from lawless kids in a show of unchecked vigilante justice, as in the days of the Wild West?  If nothing changes, it’s coming!

As we celebrate the 4th of July, let us ponder what Independence Day really means in the current environment.  What Americans do now will determine the fate of the World!   “If let our kids run wild without consequence, if we forsake freedom, if we sell our sovereignty for expediency or government handouts, if we break the bonds of our Constitution, if we abdicate our right and duty to defend freedom for ourselves and future generations, we shall descend into the mediocrity, apathy and self loathing under which the rest of the world operates and will be pulled down to their level, never to rise again.”  (Taken from: “Is The 4th of July Truly Independence Day?“)

Ron Ewart is a nationally known author and speaker on freedom and property rights issues and author of his weekly column, “In Defense of Rural America“.  For 14 years Ron has been the president of the National Association of Rural Landowners (NARLO) (www.narlo.org), a non-profit corporation headquartered in Washington State, acting as an advocate and consultant for urban and rural landowners.  Ron can be reached for comment at the following e-mail address: mailto:r.ewart@comcast.net?subject=comments

The Irrational Emotion and Radical Idealism of the Young added on Sunday, July 5, 2020