“WE ARE STRONGER TOGETHER”

(May 31, 2020) — God loves Der​e​k Chauvin. Two days after he​​ killed George Floyd by crushing his trachea with his knee for more than eight minutes, it is extremely difficult to admit that fact. Nevertheless, the fact that God loves him is as true as the brutal murder we have all witnessed from every possible angle. Both of these truths can exist simultaneously; I’ll get to how and why.

On Wednesday evening, my family and I were headed out for our evening walk when the news hit. Our household began to mourn almost immediately after hearing the news and seeing the video. Our 15-year-old daughter suggested that we should leave the country. Maybe we will be safer somewhere else, she reasoned.

Her Dad and I reminded her that this is our country. God put us here for a reason and we do not have the right to leave​-​especially since our people are dying every day in America. I understood her reasoning, though. Her entire life, it seems, has been filled with horrifying videos of police brutality against Black people. I had to admit that was actually one of my first thoughts. I often feel like we are trapped in a place where our lives are so devalued that we are murdered and abused at will with no outrage from our leaders and no help from anywhere. After watching the torturous video, even I wanted to find a place to ask for help-the UN, a media outlet in another country, my mind was racing to figure it out. But, I knew down in my spirit, that I had to help my daughter see that leaving was not the answer​-​even as every bone in my body wanted to be transported anywhere, but here.

My 19-year-old son, tired of seeing people in the Black community abused, murdered, hunted, and harassed, just kept saying, ‘It’s not fair; why do we have to live like this? Why does this keep happening?’ It keeps happening, I explained, because the people who are supposed to stand up for the weak and defend them are not doing it. Also, evil has to be dealt with​-​whether through prayer, legislation, or the hand of God. It sounded lame when I heard myself, but it’s what I know to be true.

Yesterday, my hurt and anger turned to disgust. I had two meetings scheduled and thought I would be real, and let my colleagues know how I really felt, when they asked me how I was doing. When the time came, I realized I wasn’t ready to say anything to anyone about how I was feeling. I was still processing what I had seen​-​and it was so deeply hurtful. I might say something I would regret, so I kept quiet.

A friend sent me a text message with a Scripture verse that read, “God is our refuge and strength, a very present help in trouble…” Initially, I thought, ‘I don’t have time to read that​-​and what good is it going to do anyway’? I stared at it for a minute because she had typed it in all caps. It softened my heart just enough for me to decide I was not going to bring my cloud and attitude to everyone I encountered for the rest of the day. Thank God ​for church ladies who text.​

Since I’m still doing everything from home, I sat down at my kitchen table which doubles as my office sometimes. I was planning to check my emails, but my eye was drawn to my gray church notebook. I was still disgruntled and a bit angry, but as I flipped through my notes, I began to see things from God’s perspective and not mine.

I read about how hurting people hurt others and how hurting people need hope. I was beginning to sense that God was showing me that those officers were insecure; that like most bullies, they were actually weak and afraid. Without their uniforms and their weapons, they were nothing-not in others’ eyes, but in their own. If you’ve ever met a bully or been one, you know that once a bully is confronted or exposed, underneath they are simply lost, scared and in need of love.​ ​

​​I​ ​​​know from personal experience that Jesus loved me even when I went around proclaiming that I may never accept Him. More than twenty years after I asked Him to help me live for Him instead of myself, I know for sure that He transforms. He forgives and He cleanses. While He does all of this, like any good father, He chastises, holds accountable, and punishes when necessary. That’s love.

So the current evil that I found so difficult to explain to my son is what we must combat in America and the world today.  Genocide of an entire group of people was not acceptable to God when King ​Xerxes I​ planned it, and it is not acceptable to Him today. How did God stop the genocide that he had planned? He used people. Queen Esther prayed, fasted, and risked her life by speaking up on behalf of her people, the Jews. The result? The law was changed and a whole race of people was spared impending extermination. 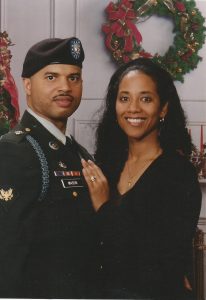 My husband ​and I ​ha​ve​ been fighting for years for the right of service members to serve without fear of racist attacks. Systemic of our society, the same racism ​my husband​ dealt with in the Army must be eradicated throughout this country and our Nation’s laws must be changed. I’ll try to answer the burning question on the hearts and minds of good people of ALL races across the globe. What can I do? Here’s your answer. Pick one thing or work on all of them:

​Join with organizations working to restore the Civil Rights Act of 1871​. That means no more so-called “qualified immunity” for law enforcement!

​Fight to fix ​the Law Enforcement Officer Bill of Rights.  It disincentivizes firing police officers who commit crimes or abuses.

Educate yourself. Find out more about Black culture. Television and movies have brainwashed even Black people to believe a false caricature of who they are. You will find a rich history that dates back thousands of years.

Do some introspection. That means all of us! These tragedies help us to see our weaknesses and flaws. Let’s address them!

Treat people the way you want to be treated. Learn about manners, etiquette, and kindness. Apply what you’ve learned.

Figure out your gifts, talents, and abilities and use them to make the world a better place.

How can I say that God loves the officer who brutally murdered George Floyd? The wisest man I ever met, my Black father, taught me how. He grew up in the 1930s and 40s in Louisiana where White people intentionally ran Black people over with their cars. His mother would tell him to always cross the street with White people, ‘so they won’t run us over.’ He watched this happen all through his childhood.

When he was in his fifties, Dad became a Pastor. Interestingly, all the members of the church were White. As people like to say, God’s got jokes. Dad had every reason in the world to hate the people who killed his neighbors simply because they were Black, or those who spat on him when he served in the Air Force, called him nigger and boy, told him his family wasn’t wanted in the neighborhood when he tried to buy our family’s home in Pittsburgh in 1970. He lived with trauma almost his entire life. God forgave Dad and healed his heart by sending whites who loved him–black skin, degrees, family, and all. Once he was healed, he was able to minister to the very people whom he once hated.

Our Nation is in need of healing today. Now that I have ​begun​ to move past my hurt and anger, I can begin to talk about love. I could only do this with God’s power. In and of myself, I would be bitter and stuck. But as I explained to my children, God put us here to be His hands and to defend the defenseless. Even saying this is only possible because I have a relationship with Jesus. He is love.  He transforms. He forgives and He cleanses. And like any good father, He chastises, holds accountable, and punishes when necessary. That’s love.

Let’s pray for the family of George Floyd, our leaders, each other, and our Nation. And then let’s get about the business of changing laws and changing ourselves for the common good. We are stronger together.

Shahnaaz Mason is a wife, mother, writer, and veteran of the US Army. She and her husband, Dr. Gary Mason, II are screenwriters of Cathy Williams, Female Buffalo Soldier. Follow Shahnaaz on twitter @_ShayMason

Wiping Out Racism With Love, Education & Action added on Sunday, May 31, 2020

5 Responses to "Wiping Out Racism With Love, Education & Action"