Where is Judge Sullivan? 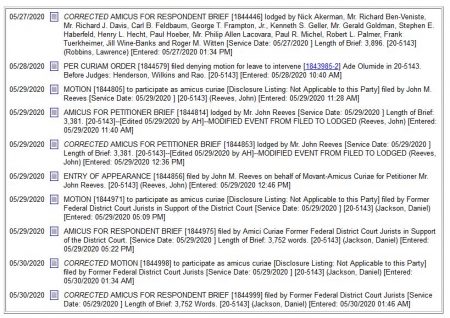 The appeal was made from a case originating in the U.S. District Court for the District of Columbia as a result of a declaration by the assigned judge, Emmet G. Sullivan, that he was appointing a retired federal judge, John Gleeson, to “oppose” the Justice Department’s decision not to pursue the charge, filed May 7.  Sullivan also invited the submission of amicus curiae briefs, of which a number have been filed in support of the petitioner (Flynn) and the respondent or “district court.”

On December 1, 2017, Flynn entered a “guilty” plea in response to a charge of lying to the FBI during a January 24, 2017 ad hoc interview in the West Wing, where he was serving as President Trump’s national security adviser. He re-entered the plea as the case progressed through numerous delays and ultimately, a change in his legal representation last June.

Flynn’s position as national security adviser would last only 24 days after leaks of his conversations with then-Russian Ambassador Sergey Kislyak to The Washington Post appeared to show that Flynn had not been honest with Vice President Mike Pence about the nature of those conversations.

Sullivan also asked Gleeson to consider whether or not Flynn had committed “perjury” when he entered the “guilty” pleas.  In December 2018, Sullivan accused Flynn, a 33-year Army and combat veteran, of having “sold your country out” in an unexpected soliloquy in which he mentioned “treason.”

On January 29, Flynn filed a motion to withdraw his “guilty” plea.

On May 11, Gleeson published an article in The Washington Post arguing that “the Flynn case isn’t over until the judge says it’s over.”

The “relief sought,” Powell wrote on page 10, is that “Petitioner respectfully requests that this Court order the district court immediately to (1) grant the Justice Department’s Motion to Dismiss; (2) vacate its order appointing amicus curiae; and (3) reassign the case to another district judge as to any further proceedings.”

On May 21, the three-judge panel reviewing the case ordered Sullivan to respond to Powell’s Writ of Mandamus “within ten days.”

On May 22, Charlie Savage of The New York Times reported that it was likely Sullivan would hire an attorney to represent him, which, in fact, was reported on May 24.  Sullivan hired Beth Wilkinson, a well-known attorney in Washington, DC circles, who served as an adviser to Judge Brett Kavanaugh during his confirmation hearings to the U.S. Supreme Court, where he now sits as the newest justice.

On Friday, Director of National Intelligence John Ratcliffe released the transcripts of Flynn’s calls with Kislyak, which show that Kislyak frequently was the initiator of the telephone calls and that he requested a secure video-conference between Trump and Russian President Vladimir Putin the day after Trump’s upcoming inauguration.  The two also wished one another season’s greetings on several occasions.

Sullivan has until midnight on Monday to file his response.  As of this writing, nothing bearing his name has been entered on the docket, although entries were made as recently as Saturday, May 30.

7 Responses to "Where is Judge Sullivan?"