“THEY SEEM TO BE VERY CHINA-CENTRIC” 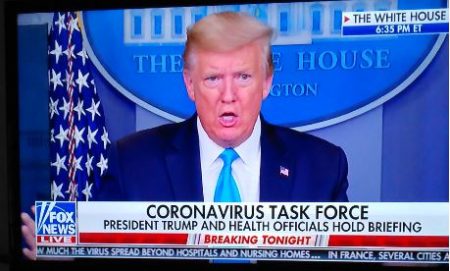 (Apr. 7, 2020) — At Tuesday’s White House Coronavirus press conference, President Trump again opened by expressing solidarity with New York and New Jersey, which he said are experiencing great hardship from the virus which originated in Wuhan, China in December.

He said some areas of the country have done “very well” and that he is “proud of them.”

Despite the rising number of deaths from the virus, he said, “We’re going to beat it.”

“This will be a very painful week,” he said.  “If one person dies, it’s a painful week…it’s a monster we’re fighting.”

He reiterated from Monday that the Army Corps of Engineers is constructing more field hospitals.

He said the administration’s relationship with governors is positive and that “federal assets” are being sent “where they are needed.”

California and Washington State have sent ventilators to states in need, Trump reiterated from his summary on Monday.

A vaccine under development he said has “great early results.”

“I will protect you if your governor fails,” Trump said unexpectedly at 5:;47 p.m. EDT.

There are 8,675 ventilators “ready to move,” he said.  “If they need something we have it,” he said of New York City and New York State, as well as with Louisiana.

He said some “great companies” are building ventilators totaling 110,000 between now and the end of June “for the future” and to assist locales which need them.

The UK contacted his administration today asking for 200 ventilators, he said.

He said all efforts are under way to “bring back” drug manufacturing “to our shores.”

As for coronavirus testing, he said “America continues to test more than anywhere in the world.”

“A real problem” is that African-Americans are experiencing particular hardship during the crisis, Trump said.  Dr. Anthony Fauci expounded that the data are showing that certain “predisposing conditions” are “disproportionately prevalent in the African-American community.”

The U.S. is assisting other nations in testing, he said.

As for mental health, Trump said that “some people are struggling” through the crisis and that on Thursday, he will be discussing “resources and tools” for coping with mental-health professionals.

He said earlier Tuesday he spoke on the phone with representatives from banks about the small-business loans made available through the CARES Act so they can pay their employees and “stay open” in the wake of nearly-universal shutdowns from the pandemic.

“We’re way ahead of schedule” in disbursing money from the Paycheck Protection Program, he said, and that he is asking Congress to appropriate many more billions to assist more small businesses.

“The small business is 50% of our economic strength,” he said.

The World Health Organization (WHO), he said, is generously funded by the U.S. but “actually criticized and disagreed with my travel ban,” meaning his barring of flights from China in late January.  “We have to look into that,” he said.  “They called it wrong; they missed the call; they could have called it months earlier…they should have known and probably did know,” he said.

Trump said he will be “putting a hold” on continued funds to the WHO, which he said appears to be “very China-centric.”

He said that Americans working together has resulted in lower numbers than were projected.  “We’re looking to have far fewer deaths than originally thought,” he said, adding that he “didn’t want to talk about it now.”

He recognized “the bravery” of doctors, nurses and first-responders to the coronavirus pandemic.

“This is all new territory,” he said, likening the current experience to the birth of the country after the American Revolution.

In response to a reporter’s question about the resignation of the acting Navy secretary after disparaging comments he made about the former commander of the USS Theodore Roosevelt, Trump said he is not acquainted with him but believes the acting secretary’s decision is “unselfish.”

Trump said he thinks “we are getting close” to the apex of the “curve” symbolizing the surge in COVID-19 cases first appearing in the country in late January.  He said New York Gov. Andrew Cuomo agrees that could be the case in his state.

Despite the economic downturn due to sudden unemployment, Trump said the U.S. remains strong compared to other nations.

Of his banning of China travel in late January, Trump said there would have been “hundreds of thousands” more U.S. deaths had he not done it.

Questions about the WHO followed from several reporters, to which Trump said, “We will look at ending funding…Everything seems to be very biased toward China, and that’s not right.”

CMS Administrator Seema Verna explained that the data being collected on individuals who have contracted the coronavirus will be analyzed, with Trump stating again that African-Americans are “numerous times more” likely to acquire the disease.  “We’re trying to find out why is it that it’s three or four times more-so for the black community as opposed to other people,” he said.  “And I don’t like it, and we’re going to have statistics over the next 2 or 3 days.”

At approximately 6:42 p.m., Vice President Mike Pence recognized the pain thousands of Americans are experiencing in their loss of a loved one to the coronavirus.

He then thanked the “heroes” who deliver, distribute and stock food in America’s food outlets.  He recognized the military members who will be providing relief to civilian healthcare workers in New York City beginning on Tuesday.

Pence said that “a control-tower system” has been established to acquire personal protective equipment (PPE) and that FEMA then distributes the PPE to locations in need.  After speaking with Cuomo, Pence said, FEMA sent 2.5 million medical gowns to New York City.

He thanked Americans for practicing “social distancing” and “looking after one another.”  He said he “sees glimmers of hope” and that all mitigation efforts must not waver over the course of the “30 days to slow the spread” during the month of April.

Dr. Deborah Birx reported that there are “seven cases per thousand” people in New York and “two per thousand” in Connecticut.  “We’re concerned about Philadelphia,” she said.

She said that the West Coast experienced significantly lower “expansion and spread of the virus” than other areas, in part because of aggressive mitigation efforts.

Birx said that outside of the New York metro area, there are places with “a different curve parameter” in coronavirus cases.  She said the lower numbers suggest less physical contact between extended-family members and “more virtual” communications.

“A series of antibody tests that have not been validated” are under development, she said, but may appear “on the internet,” which she told Americans not to purchase.  “Please wait until we have those tests validated and available; we have people working around the clock” on them, she said.

A focus of the antibody tests is to determine the number of people with a “positive” coronavirus test result but who showed no symptoms.

Fauci said that “disparities in the African-American community” signified by underlying medical conditions will “need to be addressed” once the coronavirus pandemic is over.  Those conditions, including obesity, diabetes and hypertension, often lead to complications from the virus, he said.

One Response to "Trump Administration to Evaluate U.S. Funding of World Health Organization (WHO)"