“WE NEED THE MONEY NOW”

(Mar. 22, 2020) — A misleading headline in circulation on Twitter from TMZ claims that in an interview on this morning’s “Fox News Sunday” guest-hosted by John Roberts, Treasury Secretary Steve Mnuchin said that a “quarantine,” representing the “social-distancing” model the Trump administration and state governors are asking their citizens to observe in the wake of the coronavirus crisis, will stretch out for “12 weeks.”

“Get ready to settle in, because the coronavirus quarantine will probably last into June … this according to U.S. Treasury Secretary Steve Mnuchin,” the article begins.

In actuality, Roberts asked Mnuchin the time frame he envisions for the rollout of a massive federal financial-aid package currently being considered by Congress, from the U.S. Treasury to American citizens and businesses following the shutdown of significant parts of the nation’s economy.

Mnuchin made no forecast as to the length of time “social distancing” and voluntary self-quarantining will be recommended by state governments and/or the Trump administration.

While the states of California, Connecticut, New Jersey, Illinois and New York have announced “Stay Home” initiatives for their citizens, Acting DHS Secretary Chad Wolf told Maria Bartiromo on today’s “Sunday Morning Futures” that the Trump administration is not contemplating a national quarantine order, which might include closing interstate highways and other measures, to contain the transmission of the virus. 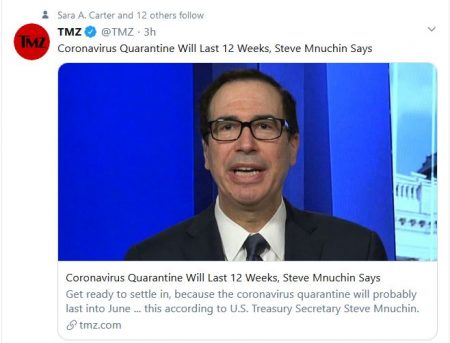 In that regard, TMZ additionally wrote, “Lots of people are crying for the federal government to impose the same lockdown in effect in New York, California and other states. So far, Trump’s said no, despite the fact the virus is in every state and, obviously, contagious diseases don’t know borders.”

Some members of Congress have stated publicly that they believe the isolation Americans are undergoing presently might be alleviated sometime in April once the swiftly-spreading virus is deemed to be under control.

The complete video of Mnuchin’s interview can be viewed here, during which Mnuchin described the legislation Congress is considering.  Proposals include financial assistance for large industries such as airlines and hotels as well as small-business owners and American families, Mnuchin said.  “We can lever up to $4 trillion to help everything from small businesses to big businesses get through the next 90 to 120 days as we win this war,” he told Roberts. (3:10)

“I hope this gets passed on Monday, because we need the money now,” Mnuchin told Roberts when he asked about a “time frame.”

When Roberts asked how much debt the country can assume, Mnuchin responded, “Well, I think the good news is the U.S. economy is strong.  We’ve stopped major parts of it, but when we get through this virus, as I’ve said, I think you’re going to see the U.S. economy come back to the strength.  We have great companies, great workers…this isn’t the financial crisis that’s going to go on for years.”