(Feb. 16, 2020) — Back in the 60’s (the 1960’s, that is), there was a TV show called “The Untouchables.”  The series chronicled the efforts of an actual special unit of the FBI to fight crime, uncover corruption and bring the bad actors to justice during the era of Prohibition and Al Capone in 1930’s Chicago.  The unit was so labeled because its agents could not be influenced, corrupted, bought, bribed or diverted from their assigned tasks of enforcing the law.  The show was acclaimed as a landmark television crime series.

Fast-forward to the present: it now appears that there is a growing group of FBI personnel (and others) who can lay claim to the label “The New Untouchables,” but for an entirely different reason.  This new label refers not to a characteristic of being incorruptible.  Instead, quite unlike the former group of FBI agents who helped bring down Al Capone in Chicago, these new folks seem to be “untouchable” not because of their upstanding moral rectitude and incorruptibility but because of their seeming immunity from the application of the law.  They seem to be untouched by – and even untouchable to – the rule of law and standards of accountability once utilized by the “Department of Justice” to redress crimes.  In a post-Obama nation, this seems to be the “new normal.”

From all appearances, the Department of “Justice” has seemingly become all too prepared and eager to hammer “disfavored” persons such as Roger Stone, Michael Flynn, Carter Page and even, by inference, President Trump, while simultaneously turning a blind eye to the identical and even worse defalcations of, shall we say, the kissing cousins of the Deep State.

Indeed, one of the stalwart defenders of the rule of law, Tom Fitton, President of Judicial Watch, recently opined that the long-awaited report of John Durham may, in fact, yield zero prosecutions.  Durham’s assignment includes delving to the depths of the chicanery – and in all likelihood felonies of – bad actors within the FBI, the Department of Justice, the CIA, the NSA, the Pentagon and other federal agencies.

But Fitton asserts that there are “thousands of Democrat lawyers,” “thousands of Comeys” and “thousands of Vindmans” populating the DOJ and elsewhere, virtually all committed – some more openly than others – to the “soft coup” which continues against the Trump Administration, even after his acquittal on the faux impeachment charges.  This makes the likelihood of achieving “equal justice under the law,” in his view, remote.  Time will tell.

The motto of the DOJ appearing on its official seal is “Qui Pro Domina Justitia Sequitur,” roughly translating to “who prosecutes on behalf of justice.”  The concept of “justice” is similarly personified in the various images of “Lady Justice,” who normally grips a sword prepared to deliver justice, but who also holds scales and wears a blindfold to signify that the law and justice will be balanced and administered equally, without bias or favor.

That was then, now is now.  There seems to be a pattern emerging where a clear two-tiered system of justice not only exists, but is expanding.  And this does not even get into the defalcations of others beyond the FBI, CIA and the darker, nether regions of the Deep State…, including the likes of Hillary (“BleachBit…, what BleachBit?”) Clinton and Barack (“Aloha-fellow-citizens”) Obama, Jr.

As noted here, there are far more unanswered questions than answers to the underlying elements surrounding such events as “Fast and Furious,” “Project Cassandra” and the Benghazi attack.  Recall as well that there are some crimes to which the statute of limitations does not apply.  While some believe that it is only a matter time before the real bad guys will feel the sting of Lady Justice’s sword, others, like Fitton, remain unconvinced. 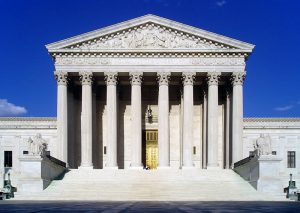 Emblazoned over the west front portico of the U.S. Supreme Court building in Washington, D.C. are found the words “Equal Justice Under Law.”  Let us see after John Durham’s work is completed and indictments, if any, are handed down whether that phrase retains any meaning at all, whether at the Supreme Court or anywhere else.

To reiterate, the Democrats and their Deep State enablers have demonstrated beyond any shadow of doubt that they have long ago irretrievably forfeited any claim of right or competence to govern a free people in a constitutional republic such as ours.  If you doubt that, just go back and watch the unending media-subsidized debates between and among the Democrat goofs who are fighting over who can drive the nation farthest left and who among them is best equipped to get crushed by President Trump in November.

Accordingly, if the Department of “Justice” cannot see its way to apply the laws equally to those who it politically favors as well as those who it politically disfavors, it will be up to the electorate to remove all congressional Democrats up for reelection in 2020 in order to re-take the House, retain the Senate and re-elect President Trump.   Perhaps then the Deep State will get the message that the era of disregard for the rule of law, the Constitution and “Beltway-business-as-usual” is over.

6 Responses to "The New Untouchables"