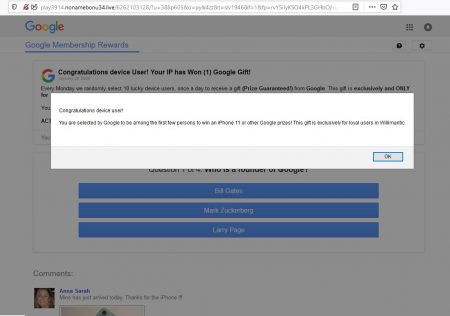 (Jan. 20, 2020) — A tip on Monday afternoon from reader CDR Charles F. Kerchner, Jr. (Ret) led this writer to the Twitter feed and website of Dr. Robert Epstein, a preeminent Harvard University-educated psychologist who has given recent interviews on what he says is Google’s ability to “shift the opinions and voting preferences of undecided voters…just because of the bias and favoritism in Google search results.”

In an interview with Glenn Beck in September, Epstein said Google is not alone in that ability as well as the fact that he “supported Hillary in 2016.”

In June, Epstein testified to the Senate Judiciary Subcommittee on the Constitution about the findings from his research on tech-company algorithms, about which he told Beck that “in 2016, I measured substantial bias in Google search results that favored Hillary Clinton, and the bias was sufficient to have shifted to her, over time, somewhere between 2.6 and 10.4 million votes.”

A separate research site to which Epstein links from his Twitter account via “MyGoogleResearch” leads to the site for the non-profit American Institute for Behavioral Research and Technology (AIBRT), for which Epstein is senior research psychologist.  The AIBRT features a new film titled “The Creepy Line,” of which it states:

Click HERE to learn about the new documentary film, “The Creepy Line,” which focuses on our research. This superb new film shows how companies like Google and Facebook are impacting the opinions and behavior of billions of people wordwide. This kind of power is extremely dangerous, because it affects people on a massive scale without their knowledge and without leaving a paper trail for authorities to trace. The film is now available on iTunes and Amazon, and Amazon Prime members can view it free of charge here.

In late December, Epstein’s wife, Misti, died from injuries she sustained after her “awesome Ford Ranger was broadsided by a Freightliner semi towing 2 loads of cement,” Epstein wrote on Twitter on January 11.

As was reported earlier Monday by The Gateway Pundit, on Sunday Epstein tweeted, “Last year, after I briefed a group of state AGs about #Google‘s power to rig elections, one of them said, ‘I think you’re going to die in an accident in a few months.’ A few months later, my beautiful wife #Misti died a violent death. Makes you wonder.”

However, on January 4, Epstein tweeted, “And, no I don’t think #Google or #Hillary had anything to do with Misti’s death, but for you conspiracy theorists out there, here’s a recent article about Misti’s accident from one of the world’s largest tabloid newspapers, the@DailyMail:” with a link to the referenced article bearing his late wife’s photo.

The messages which appeared included the following: 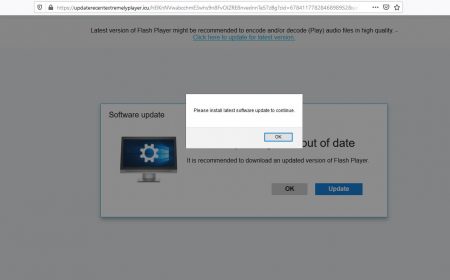 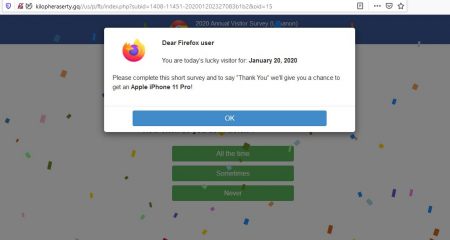 On the second attempt, we clicked the “back” button a number of times, after which the redirected screen finally led to the Yahoo! News home page.

We performed the Google search a third time, which reproduced the same initial malfunction with a different outcome.

Interestingly, we found that attempting to reach Epstein’s website through the DuckDuckGo search engine for “Dr. Robert Epstein psychologist” produced the same results. 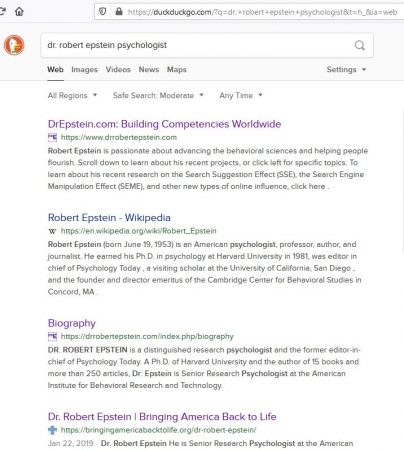 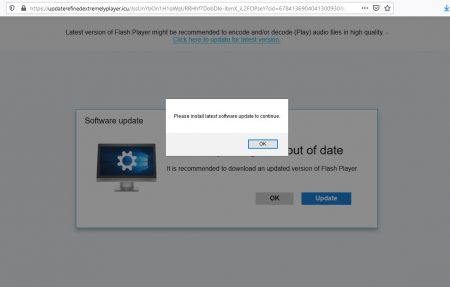 The fourth entry referencing “Bringing America Back to Life” is functional as of this writing, as is the “Wikipedia” link.

3 Responses to "Did Someone Sabotage Dr. Robert Epstein’s Website?"