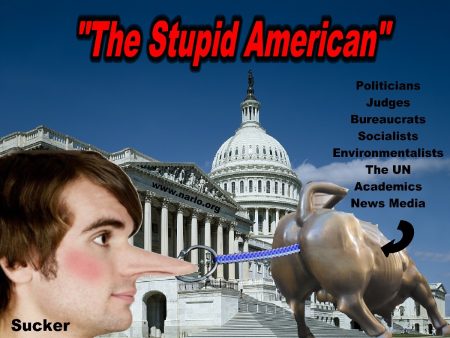 (Dec. 7, 2019) — “Why don’t they pass a constitutional amendment prohibiting anybody from learning anything?  If it works as well as [Congress] does, in five years Americans would be the [dumbest] race of people on the earth.” — A slight modification to a Will Rogers quote

“The American Republic will endure until the day Congress discovers that it can bribe the public with the people’s money.” — Alexis de Tocqueville, French diplomat, scientist and historian (1805 – 1859)

The Congress discovered it could bribe the public at the beginning of the Great Depression, a devastating national calamity brought about by the Federal Reserve.  On November 8, 2002, Ben Bernanke, at a speech given in honor of economist Milton Friedman’s 90th birthday and prior to Bernanke becoming the Federal Reserve Chair in 2006, admitted that “Regarding the Great Depression, …. We did it.  We’re very sorry.  We won’t do it again.”  No, he wasn’t joking.

It was a private financial entity with virtually unlimited power, the Federal Reserve, created by an act of Congressional Democrats in 1913 under the 16th Amendment that triggered a man-made, American financial disaster.  Many pundits will say that there were other causes and there were, but Federal Reserve policy was the trigger to the other causes.

The event sent the American economy into freefall, a nation into bankruptcy, tens of millions of Americans into sudden poverty and the creation of a giant government bureaucracy.  It also opened the door to government-instituted dependency and “bribing the public with their own money ….. for their votes.”

The growing Progressive movement was ecstatic.  Their goal of strengthening the national government and making it more responsive to popular economic, social and political demands was coming to fruition.  The realization of that goal came at a huge price for the American public, the steady erosion of freedom and free choice.  The event also gave FDR the power to take America directly into socialism.

This was a diabolical, premeditated scheme of destroying the economic stability of the nation for the sole purpose of enslaving and indenturing the entire population to the nation’s debt, a scheme so dastardly it can only be construed as high treason.   The perpetrators then never saw justice and the current perpetrators of the continuation of that scheme (Progressivism) are walking free among us as if no crime or crimes had ever been committed.

Being desperate after the crash, the American people, looking to government for salvation, bought into the propaganda, hype, distortion and government lies, forsaking their duty to preserve freedom at any cost.  They have been buying into the propaganda and lies ever since.  Progressivism hatched those policies and lies as a means to obtain perpetual political power, at the exclusion of any other ideals and principles of American freedom.  Progressives have been so successful that a nation, born under the flag of freedom, has now become a nation willingly endorsing socialism.

One of the first ways to gain power over the masses was to control the people’s minds and what they believed.  President Herbert Hoover contracted with the University of Illinois and Harvard University, funded by the Rockefeller Foundation, to study how to manipulate the American people through their subconscious minds.  Why would your government want to know how to manipulate you through your subconscious mind?  The only logical reason is to control the masses by unseen government hands and unconstitutional government policies.  If government would do this, what else would they do under the same pretense?  They’ve already done it, ladies and gentlemen.

Another way to control the masses was to inject socialism, radical environmentalism and global government concepts into the public school curriculum with subtle changes to textbooks and indoctrination of teachers in liberal colleges, which they have been doing for at least eight decades or more.  Those in government determined they could literally change public policy and sentiment and voting patterns of the next generation (thus the next government leaders) by exploiting the minds of little Johnny and Jenny, their parents being none the wiser.  Hitler used the same tactics.

Even with all the safeguards against the abuse of power and the growth of tyranny the Founding Fathers put into our founding documents, they could not have foreseen how the loss of honor, integrity and honesty and the influence of money would corrupt the people’s representatives.

The entire concept of functioning self-government was based on honor, constitutional principles and the rule of law.   Sadly, under the camouflage of growing corruption and the rise of Progressivism, the Constitution has been bastardized to a “fluid,” ever-changing document, and the rule of law has morphed into the “Lule of Raw,” all under the people’s noses and without their consent.

Why else would the likes of Bill and Hillary Clinton, James Comey, Andrew McCabe, James Clapper, John Brennan, Hunter Biden, Peter Strzok and Lisa Page, et al, not be indicted, convicted and sent to jail for abuse of power and violating federal law?  What high-level elites, officials, or politicians were shielded from prosecution by the suspicious death of Jeffrey Epstein?

Why? Because a large percentage of the American public is just plain stupid, or doesn’t care.  They are too busy getting high on drugs and keeping the Mexican cartels rolling in obscene amounts of cash, murder and other vicious crimes.  These new socialist Americans are addicted to entertainment and music that has no redeeming value and in fact, influences society to “let it all hang out,” as it were, without discipline, compunction, inhibition, or responsibility.

They lust after socialism so that they can reap the rewards of so-called “free” cash and benefits, paid for by producing members of society.  Bernie Sanders is their hero.  Millions have lost their pride, self-reliance, the work ethic and personal responsibility.  Where were their parents?

The ruling class is leading the people around by their collective noses, a ruling class that is looking down on the masses as if the rulers were superior.  They are laughing all the way to the bank.  Under their breath and amongst themselves they say, “The people are so stupid, and now we have them right where we want them, fighting amongst each other.“

Americans bow down to every government scheme that Progressives can invent.  They bowed down to ObamaCare.  Will they bow down to “Medicare-For-All,” free college tuition and the forgiveness of college debt, free health care for illegal aliens, open borders, or anything else the Progressives can cook up for “free?”  Probably.

The people got sucked into the great, wondrous student-loan program, and now millennials across America are hopelessly mired in $1.6 Trillion in debt that they can’t pay and isn’t dischargeable under bankruptcy laws.  They can’t get married, have kids, or buy a home because of the debt.

The people bowed down to the so-called voluntary income tax.  Now they are so hooked on paying the income tax the IRS can get them to bow down to any new IRS code change that comes along or any new legislation that changes the tax forms, without so much as a whimper and no matter how much of our money the government wastes.  The last change to the tax and forms made the process even more complicated.  You might pay less; that is, if you can figure out how to fill out the stupid tax forms.

Americans are bowing down to the fraud of climate change.  The propaganda of climate change is everywhere.   It’s in our schools and colleges.  It’s on the TV and on radio.  It’s in the newspapers.  Even corporations are buying into it.  Meanwhile China plans to build over 300 new coal-fired power plants in the next five years.  Any efforts to control CO2 emissions in America in pursuit of saving the planet will be eclipsed by China and India’s CO2 emissions.  The earth won’t even notice the difference.  But no, it is Americans that must bow down to the “God of Green” because we’re so rich and we’re guilty for “destroying” the planet.  Suckers all.

Under our noses, environmentalism has morphed into a radical cult, just as Islamo-Fascism is a radical cult with designs to make converts by force of violence.  The only difference is, the radical environmentalists make converts by force of law, using the three branches of government as its lawmaker, enforcer and the minister of climate-change propaganda.  The environmentalist’s disciples say, bow down and obey the “God of Green,” or you go to hell in trial by fire, or in corrupt courts that have lost all allegiance to the Supreme Law of the Land.  This became visually and painfully evident when the Earth Liberation Front (ELF) decided to make those “heathens” who build houses pay for their environmental heresy.  In a criminal and violent act, ELF started the fires that burned to the ground four of the five “Street of Dreams” homes being built near Woodinville, Washington.  Radical environmental violence is everywhere in America, while the people cow in submission.

Governments, federal, state and local, politicians and bureaucrats alike, are the Imams, the High Priests and the Clerics of the “God of Green.”  They are the carriers, the implementers and the heavy-handed enforcers of this environmental radicalism that now permeates every corner of America and the world.   If it isn’t save every wetland, no matter what the cost, it’s quit driving your car because you are killing the planet with man-caused global warming, a government fraud.   Or, stop using your rural land because the environmentalists want your land for wildlife corridors, aquifer re-charge, fish habitat, conservation easements, or open space.  The city folk and the radical environmentalists call your private rural land “their” land, as if they owned it.

As you are reading this you are probably saying to yourself, “Hey, I’m not one of those people you are describing.  I’m a proud, productive, responsible American.  No one leads me by the nose!”  You may be absolutely right, but you should be really angry with those people we are describing because they are destroying the very America of which you are so proud.  Who are they?  You already know.

We don’t beat around the bush in our articles, ladies and gentlemen.  We tell it like it is.  Unfortunately, it is difficult for some people to accept reality, much less do anything about it.

Ron Ewart is a nationally known author and speaker on freedom and property rights issues and author of his weekly column, “In Defense of Rural America.”  Ron is the president of the National Association of Rural Landowners (NARLO) (www.narlo.org), a non-profit corporation headquartered in Washington State, acting as an advocate and consultant for urban and rural landowners.  Ron can be reached for comment HERE.

Americans Are Suckers And Led Around By The Nose! added on Saturday, December 7, 2019

5 Responses to "Americans Are Suckers And Led Around By The Nose!"