“THAT COULD NEVER HAPPEN IN POLITICS…COULD IT?”

(Nov. 26, 2019) — Already, it starts.  Barely a week has passed since Adam Schiff ceremoniously shouted, “We’re better than that!” in gaveling to a close the House Intelligence Committee’s “impeachment inquiry” on President Trump, and already smoke signals curl upward that the farce is unraveling.

For openers, both marionette Schiff and his puppeteer, Nancy Pelosi, now signal that no final decision has been made regarding preparation of formal articles of impeachment to be submitted to the House.  Following his escape from the hearing room, Schiff has now announced that he wants the opportunity “to discuss this [Don Quixote impeachment stupidity] with my constituents and my colleagues before I make a final judgment on it.”  Pelosi echoes this sentiment.  Smoke signals also hint that Schiff may become the sacrificial lamb when the clown show eventually implodes.

Second, the first of presumably a coming cascade of House Democrats – back in their districts to face the growing wrath of their constituents for pursuing the impeachment joke against President Trump – are going through an epiphany: impeachment was and is a losing proposition and should likely be abandoned without the formality of drafting actual articles of impeachment, voting on them and sending the blob over to the Senate…. where it will smolder for a while, then eventually die.

As but one of the first of surely many more examples of Democrat dominoes to come, Rep. Brenda Lawrence, an African-American who has since 2015 represented Michigan’s “deep blue” (not to be confused with “Deep State”) D+30 14th congressional district (Detroit/Gross Pointe/Pontiac), announced last Sunday that “she no longer sees the ‘value’ in moving forward with the process this close to an election.”   Parenthetically, if you want to see congressional gerrymandering in action, just take a look at her district.

Lawrence’s change of heart and mind was a dramatic, 180° reversal of the position she was taking as recently as last month.  Back then, she adamantly insisted that impeachment needed to move forward.  She claimed at that time: “I feel strongly that for my legacy, for my time in history, sitting here at this table with an oath of office to protect this country, to protect the democracy of the United States of America, I cannot sit silent, that I must move forward with [impeachment] because this is egregious.”  Now, instead of impeachment, “protecting democracy” suggests in her mind that censuring the president instead of impeaching and removing him will suffice because November 2020 is not that far off.

Really?  Censuring President Trump by telling him that he is hated by the Democrats because they think he is a bad person will save the nation?  And to protect her “legacy?”  Seriously?   Reading between the lines – a mandatory requirement whenever assessing the words of a politician, regardless of party affiliation and especially if spoken in public – what Representative Lawrence is really saying is that, even in her D+30 congressional district, the tide of public opinion (i.e., voter sentiment) was dramatically turning against impeachment.

Translation of Lawrence’s words: “If I keep on yapping, like Schiff and Pelosi want me to do, that impeachment and removal of President Trump is compelled in order to ‘save the Republic,’ I stand to lose my own re-election in 2020.”  Forget about “protecting democracy,” it is necessary for me to first “protect my incumbency.”

Whoa!  Stop the presses!  A mere two days after doing her 180° reversal, Lawrence has again reverted to supporting impeachment.  By analogy, one is reminded of John Kerry’s explanation that he was “for” something before he was “against” it.  Lawrence has given the concept added new meaning: she was for impeachment before she was against it but now she’s for it again.  Is there an Olympic political gymnastics event called “the double epiphany flip-flop?”  If not, there should be. 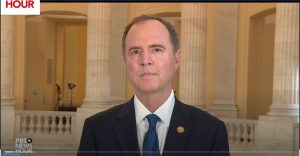 After news of Lawrence’s Sunday 180 reached Pelosi and Schiff, would it be too cynical to suggest that, after several “tense” telephone calls between her and Pelosi and/or Schiff and/or DNC chair Tom Perez (with promises of DNC cash to prop her up in her 2020 CD 14 re-election race)…, she realized the “error” of her ways?  Nah… my bad… that could never happen in politics…, could it?

Who, pray tell, is not already painfully aware of the fact that most Democrats – and particularly Democrats in the U.S. House of Representatives – have hated private citizen Donald Trump since November 9, 2016, when it was by then clear that he had secured the 270 electoral votes to win the presidency?  Their hatred only intensified on January 20, 2017, when he became President Trump.  Democrats and the Deep State denizens will never… repeat, never… forget or forgive him or the people who elected him for the cardinal sin of depriving Hillary (“Vile Video”) Clinton of her rightful coronation as the first female president of the United States.  Take that to the bank.

The faux “tide” in favor of impeachment long-peddled to the electorate by the Democrat propaganda arm – meaning: CNN, MSNBC, CBS, the Gray Trollop and the rest of the mainstream media – now shows unmistakable signs of becoming a deadly whirlpool.  It is evolving into a monster of the Democrat leadership’s own design into which pro-Trump “red district” and even “solid blue district” Democrats will be sucked if they don’t come to the same “First Epiphany” as Representative Lawrence.  As they used to say “down South”: “Momma didn’t raise no fool.”   Let us await with interest how many more Democrat dominoes fall; get calls from Pelosi/Schiff/Perez; then do the double epiphany flip-flop.  Get some popcorn… this could be entertaining.

Third, with the ominous revelations soon to break on the beach consisting of Inspector General Michael Horowitz’s report (promised for Monday, December 9, 2019) and thereafter the likely even more interesting report on the real culprits and Deep State actors from John Durham, the future for the Democrats is starting to look – let us be polite here – “not rosy.”

If additional defalcations and/or felonies such as this and this are discovered and disclosed by Mr. Durham, the likelihood is that President Trump will be re-elected and control of the House of Representatives will be returned to the GOP.  This, of course, would be a good thing. 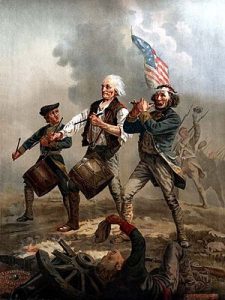 Most pollsters and pundits seem to concur that the key to winning presidential elections lies not primarily with the Democrats or the Republicans.  Rather, it lies with the Independents, as they form the large “middle ground” component of the electorate.  Win their support and you will likely win the election.

In closing, consider this grammatical point: homophones are words pronounced the same way, but which have different spellings and meanings, like “bear” and “bare.”  There is a homophone of the term “Independents”: “independence.”  Tying that term into the preceding discussion, if the freedom, liberty and independence the citizens of this nation have enjoyed and prospered from since 1787 are to continue, then voters claiming to be Independents on November 3, 2020 will likely be the key to that happy condition.  Let us hope.

And, once more faithful P&E readers…, vote carefully in 2020.

One Response to "The Double Epiphany Flip-flop"