WHAT IS THE “IMPACT?”

(Oct. 22, 2019) — At 10:00 AM EDT Tuesday, the Senate Judiciary Committee will convene a hearing titled, “Sanctuary Jurisdictions: The Impact on Public Safety and Victims” under Chairman Lindsay Graham (R-SC).

The session will be live-streamed from the committee’s website.

In July, Sen. Thom Tillis (R-NC), a member of the committee, introduced legislation titled, “Justice for Victims of Sanctuary Cities Act,” cosponsored by Sens. Joni Ernst, Charles Grassley, Marsha Blackburn, and Ted Cruz.  “The legislation creates a private right of civil action for the victims of sanctuary jurisdictions, allowing them to bring an action for compensatory damages against the sanctuary jurisdiction as a result of a violent crime committed by an illegal immigrant. Any sanctuary city or jurisdiction that refuses to waive its immunity as it relates to sanctuary-related civil action would be subject to the withholding of certain Community Development Block Grant (CDBG) funding,” Grassley’s website announced on July 9.

“Sanctuary” cities and jurisdictions are those which actively protect illegal aliens. Some jurisdictions comprise entire states, as in the cases of California, Connecticut, New Jersey, Vermont, Oregon and New Mexico, among others.

In 2017, California passed SB54, which “limits assistance” to be given by state-level law enforcement to federal authorities and requires the consent of the suspected illegal alien in custody to speak with ICE agents.

According to the Judiciary Committee’s website, there will be two panels of witnesses, the first of which includes a current U.S. attorney and the acting executive associate director for Enforcement Removal Operations within the Immigration & Customs Enforcement agency, also known as “ICE.”

ICE is a division of the Department of Homeland Security (DHS), formed in the wake of the 9/11 attacks.

The second panel of guests will include Mary Ann Mendoza, whose police-officer son Brandon’s life was cut short by an illegal-alien driver in 2014. A Trump supporter, Mendoza is founder of Angelfamilies.com and has recently rendered assistance to Kathy Inman, who was severely and permanently injured after the car in which she and her husband, as well as their only child Dustin, was struck from behind by an illegal alien who later fled the country to his native Mexico and was never apprehended.

Dustin and the family dog were killed, and Kathy and Billy were hospitalized such that they could not attend their son’s funeral.

Relatives of those whose lives have been taken by illegal aliens are known by their supporters as “Angel moms” or “Angel dads,” as the case may be.

On Monday evening, Mendoza announced her appearance on Tuesday as well as Tillis’s summary of his proposed bill: 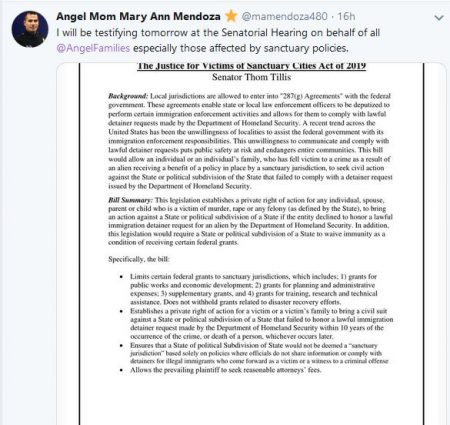 In June, Kathy’s husband Billy, who The Post & Email interviewed in June 2017 and was Kathy’s caretaker, passed away unexpectedly, after which Kathy experienced a medical emergency and was hospitalized.

In July, Twitter locked Mendoza’s account after she issued several tweets, including one to presidential candidate Sen. Kamala Harris, about crimes committed by illegal aliens, Breitbart reported.  It is unclear if Mendoza deleted the tweets which Twitter found objectionable in order to reopen her account; however, Mendoza’s Twitter account was restored this month or earlier.

On October 13, Mendoza tweeted an update to the renovation project her organization sponsored for Kathy Inman to remodel part of her home to accommodate handicapped access. 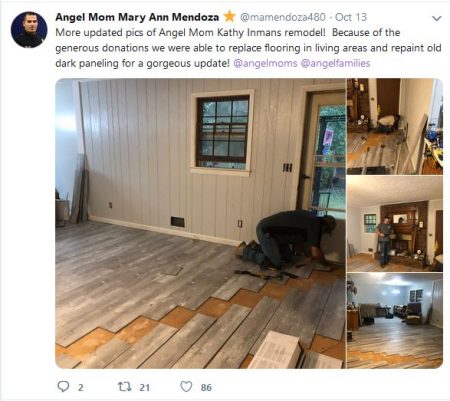