WILL CNN HAVE TO PAY DAMAGES FOR BIASED COVERAGE? 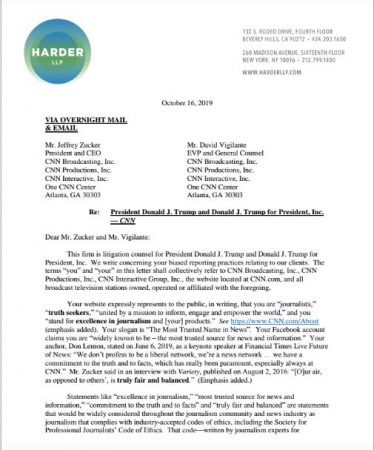 (Oct. 19, 2019) — On Friday, President Donald Trump’s campaign fired back against CNN, a left-wing network masquerading as the home of “excellence in journalism.” His attorney sent a four-page letter to the network pledging to sue for a “substantial payment of damages” for their history of biased coverage.

This week, James O’Keefe of Project Veritas released a series of video tapes compiled by a whistle-blower, Cary Poarch, who became disgusted with the overt bias at the network. The tapes showed multiple examples of CNN employees admitting their network’s skewed coverage of President Trump.

For example, CNN President Jeff Zucker urged his colleagues to pursue “impeachment above all else.” In another undercover video, Nick Neville, CNN Media Coordinator, said that Zucker had a “personal vendetta” against Trump.

The President’s attorney, Charles Harder, noted that the Project Veritas videos “are merely the tip of the iceberg of the evidence my clients have accumulated over recent years.” In his letter to Zucker and CNN Executive Vice President David Vigilante, Harder vowed to “file legal action against you, to seek compensatory damages, treble damages, punitive damages, injunctive relief, reimbursement of legal costs, and all other available legal and equitable remedies, to the maximum extent permitted by law.”

The suit will focus on CNN’s alleged violations of the Lanham Act, which was enacted in 1946, and prohibits a variety of activities such as trademark violations and false advertising.  Clearly, CNN does not fulfill the promises made in their advertising to be the “most trusted name in news” or “the worldwide leader in news.” Instead, the network is merely a mouthpiece for the Democratic Party and a vehicle to attack President Trump.

Harder notes that media outlets are afforded protections under the First Amendment, but there is no license to offer “misrepresentations to the public, to your advertisers and to the public.”

In the 1980’s, CNN burst upon the American news media scene as a fresh alternative to the three broadcast networks, ABC, NBC and CBS. Initially, CNN presented fair and balanced reporting and won accolades for coverage of major events like the first Gulf War in 1991. The network featured entertaining and educational programs like “Crossfire” with conservative commentators such as Pat Buchanan and Robert Novak, and liberal commentators such as Michael Kinsley and Bill Pratt. In an even-handed way, the hosts debated the major issues from both sides of the political perspective.

Eventually, the veil of objectivity was lifted, and viewers were able to see a truly left-wing network that was a propaganda tool for the Democratic Party. Today, CNN features only ultra-progressive hosts such as Anderson Cooper pretending to be serious and fair journalists.

On Tuesday night, during the Democratic Party presidential debate, Cooper delivered beautifully for the left when he “questioned” former Vice President Joe Biden about the activities of his son, Hunter Biden. He claimed that President Trump had “falsely accused” Hunter Biden of “doing something wrong while serving on a company board in Ukraine. I want to point out that there is no evidence of wrongdoing by either one of you.”

Oh, really, Anderson, there is plenty of evidence of at the very least shady dealings, including potentially criminal conduct. Presumably, Anderson and his CNN colleagues missed the infamous video of Joe Biden at a Council on Foreign Relations meeting boasting of his threat to withhold $1 billion in U.S. loan guarantees unless Ukraine fired a prosecutor who was investigating Burisma, the oil and gas company that paid Hunter Biden $50,000 per month to serve on their board. Hunter Biden had no knowledge of the industry or the country, but was happy to take the money, given to him solely because his father was Vice President.

CNN has become a disgraceful exercise in liberal advocacy while claiming to be a network of “truth seekers.” Fortunately, thanks to Project Veritas, CNN is finally being exposed for their hypocrisy and unfairness. Next week, O’Keefe promises to release another bombshell video that alleges serious wrongdoing by a top CNN executive.

The network’s response to the threat of a lawsuit was unsurprising. In an official statement, CNN declared the lawsuit was “nothing more than a desperate PR stunt and doesn’t merit a response.”

Let’s hope President Trump’s campaign is successful in their lawsuit because, as his attorney stated in the letter, “Never in the history of this country has a President been the subject of such a sustained barrage of unfair, unfounded, unethical and unlawful attacks by so-called ‘mainstream’ news.” It is time for this network to pay a financial price for their dishonest reporting and their undeniable hatred toward the President of the United States.