AMID ALLEGATIONS OF GOVERNMENT MONITORING OF JOURNALISTS 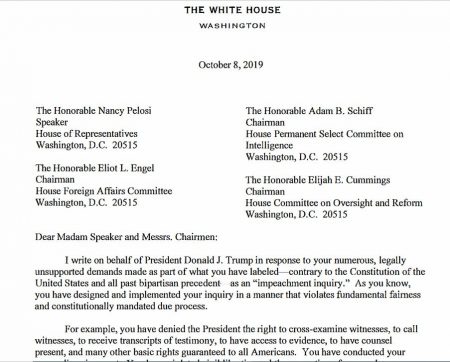 (Oct. 9, 2019) — On Wednesday’s “Hannity,” House Intelligence Committee ranking member Devin Nunes said that House Democrats, who opened an “impeachment inquiry” of President Trump in late September, are on a trajectory to “do a lot of really bad things” due to their majority in the lower chamber of Congress and control of committee agendas.

The conversation took place after Hannity discussed at length a letter from White House Counsel Pat Cipollone to key House Committee leaders claiming that their methodology to find evidence to impeach Trump is unconstitutional and deprives the executive branch of its due-process rights.

Cipollone also wrote that Democrats have denied House Republicans the right to issue subpoenas, unlike the House impeachment proceedings regarding Presidents William Clinton and Richard Nixon.

Speaker of the House Nancy Pelosi announced the “inquiry” on September 24 after a U.S. intelligence-community “whistleblower” filed a complaint with the Intelligence Community inspector general in August.  The complainant first contacted the office of House Intelligence Committee Chairman Adam Schiff about his grievance, multiple media sources reported after the complaint became public.

Intelligence Committee Republicans called upon Schiff to step down in late March, which he declined to do.  While opening a committee hearing with Acting Director of National Intelligence Joseph Maguire on September 26, Schiff misreported the contents of Trump’s call with Zelenskyy, later terming it a “parody.”

Trump has called for Schiff and Pelosi to be “impeached,” although members of Congress cannot constitutionally face that form of discipline.

The alleged whistleblower claimed that a July 25 phone call between Trump and Ukrainian President Volodymyr Zelenskyy contained a quid pro quo from Trump in exchange for Zelenskyy’s hypothetical reopening of an investigation halted in the spring of 2016 after then-Vice President Joe Biden pressured then-Ukrainian President Petro Poroschenko to fire the Ukrainian prosecutor general. Viktor Shokin.

Biden was designated the official Obama-regime liaison to Ukraine after Russia invaded and annexed Crimea in 2014.  Biden’s son, Hunter, subsequently served on the Board of Directors of Ukrainian energy company Burisma Holdings, reportedly profiting handsomely without experience or expertise in the field. 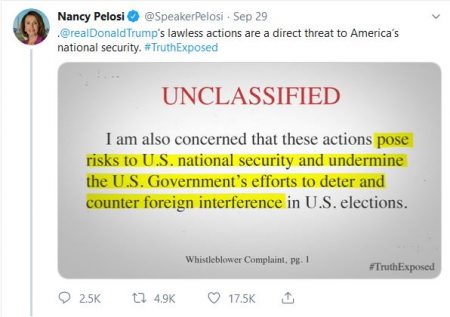 The day after the complaint was made public, the White House released a composite transcript of the phone call, which Trump claimed was “perfect” and did not invoke a quid pro quo.

Earlier on Wednesday, Joe Biden joined the call for Trump’s impeachment while on the campaign trail. As he has twice before, Biden is seeking the Democratic 2020 presidential nomination.

“We do have Biden on tape bragging about leveraging and a shakedown, a billion dollars of taxpayer money to force Ukraine to fire the Ukrainian prosecutor in six hours — and he signed an affidavit saying that’s why he got fired — or, he’s not giving them the money,” Hannity said to Nunes, referring to an interview Biden conducted at the Council on Foreign Relations in January 2018.

According to investigative reporter John Solomon on Tuesday, Ukraine launched a new investigation into the 2016 Biden matter in February, five months before Trump’s call with Zelenskyy and two months before Zelenskyy’s election, a report Nunes referenced in his response to Hannity.

In breaking news and a change of topic, Hannity said that “his sources” informed him that “the former U.S. ambassador to Ukraine…do you know of any evidence that she may have used government resources to monitor communications of American citizens, and do you know if any of these citizens might have been journalists?”

Nunes replied that he has been told that Solomon, now a Fox News contributor, was possibly “monitored” by the former ambassador to Ukraine, Marie Yovanovitch, who the Trump administration recalled in May.  Nunes said Yovanovitch is scheduled to testify to the committee “on Friday” but that her appearance is uncertain.

Nunes added that former Rep. Pete Sessions, chairman of the House Rules Committee before he left Congress in early 2019, said he found that Yovanovitch was not serving the Trump administration well.  Nunes said he and others will be “looking into” the allegations of government monitoring of “multiple journalists.”

One of the journalists those allegedly monitored, Hannity said, is Solomon, who appeared on the program at 9:22, just after Nunes went off-camera.  Solomon has been conducting extensive research into activities in Ukraine involving American political operatives reportedly attempting to gather negative information in 2016 on then-presidential candidate Donald Trump and his short-term campaign manager, Paul Manafort, who is currently serving an 8½-year prison term on eight federal convictions.

Hannity asked Solomon if he “knew” about the alleged monitoring, to which Solomon responded, “About ten days ago I received multiple contacts from the Intelligence Community suggesting that there may have been some inappropriate monitoring of my communications.  It is not yet clear what that consisted of…to date, my lawyers have not yet been able to get a full accounting of what happened.”

Nunes: Democrats “Can Do a Lot of Really Bad Things” added on Wednesday, October 9, 2019

3 Responses to "Nunes: Democrats “Can Do a Lot of Really Bad Things”"