(Oct. 1, 2019) — I’m confused, probably because I’m just not smart enough to understand the great, underlying wisdom of the following:

John Brennan, a Communist, was put in charge of the CIA, an agency charged with spying on the Communists.  So, instead of spying on Communists, he plants people in the White House to spy on the President and his administration.  And the MSM says, “So, what’s wrong with that?”

Then, magically, mysteriously a CIA “whistleblower” pops up claiming that President Trump said things he clearly never said, even though said “whistleblower” never heard the conversation and only reports hearsay “evidence” he was told by others.  This (timing is everything), just ONE MONTH after the law is mysteriously changed in the dark of night to allow Never-Trumpers to report rumors and watercooler scuttlebutt, claiming “whistleblower” status, all while Brennan trumpets to everyone in government to report every last rumor they hear and claim “whistleblower” status.  And the press says, “Yeah, it’s about time!”  No pre-constructed conspiracy there, right?

Joe Biden, as Veep, is sent to Ukraine to ferret out corruption under a US-Ukraine treaty (signed by Bill Clinton) wherein the US and Ukraine can ask each other for help in criminal/corruption investigations.  Biden takes his son, Hunter, on the trip.  Joe and Hunter returned from Ukraine with a $600,000 a year no-show job for Hunter, in a business Hunter knows nothing about, and Ukraine remained mired in corruption thanks to Biden having Ukraine’s top prosecutor fired for investigating corruption (some of it possibly involving Hunter?).  Job well-done!  Meanwhile, Biden, the Dems, and the media obsess over Trump’s tax returns, businesses, and whoever might stay in a Trump hotel?!

Then, ‘Good old Joe’ takes Hunter to China on Air Force Two and they return with a $1.5 BILLION deal benefiting Hunter, but NOTHING benefiting America?  Really?!  And, the press goes, “Ho-Hum.”

Adam Schiff, a member of Congress and the Chair of the House Intelligence Committee, openly lies about what Trump “really” said (in code) to the Ukrainian President and even has his lies entered into the Congressional Record.   The press says, “So, he was just making a parody.   What’s wrong with that?”  Then, the Dems spin on a dime and allege that Trump MIGHT have lied to Mueller, and the media says, “Wow!  THAT has to be looked into and we need to re-open the Mueller probe.”  Someone please explain that to my feeble mind.

Maybe, just maybe, if we’re really lucky, we can elect members of Congress who can read a transcript.  And, while we’re at it, maybe we can get members who actually READ AND UNDERSTAND the Constitution and the law.  What are the odds?

Hillary Clinton, as Secretary of State, set up a private server, in open defiance of federal law, and sends Top-Secret information over it.  Then, when caught and the evidence is subpoenaed, she has the emails erased and all devices physically destroyed.  Even her lapdog James Comey, in a press conference, lists the numerous federal felonies she committed but refuses to investigate or indict.  Say what?!  And the Dems and the media say, “So, what’s the problem?!”  Now, she may well be setting herself up for yet another run at the presidency.  And the Dems and the press go, “Hooray!  You go, girl!”

Meanwhile, a common sailor on a nuclear submarine stupidly and innocently snaps some pictures (selfies).  Realizing what he had done, he never develops or uses the pictures and self-reports.  He languishes in prison for a year.  He should have been working for Hillary and he could have sold the pictures to Russia.  And, the press goes, “Booorrring.” 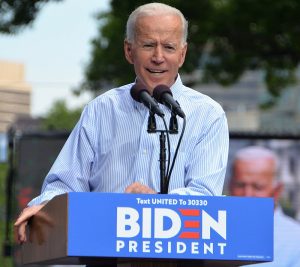 When Trump puts his communications onto a secret and secure computer, the Dems and media have a cow: “Mr. President, you’re supposed to publish everything you do and say daily in The New York Times.”  But when it is suggested that perhaps President Trump can release and publish Obama’s communications, the Dems and media scream, “Oh, HECK, NO!  You can’t do that to our Lord and Savior, Obama the Omnipotent!”  No hypocrisy there, right?

When President Trump tries to uncover any criminality in the Russia probe, the Dems and media falsely claim he is “abusing” his powers.  BUT, when the Dems actually DO abuse both their powers and the truth, the mantra is, “We’re just doing our job.”

When Democrat Senators send a letter to Ukraine asking them to dig up nonexistent dirt on Trump, the media is totally on board.  BUT, when Trump asks Ukraine to look into Biden’s corruption, the Dems and the media are apoplectic.

Mayor DeBlasio has signed a new, PATENTLY UNCONSTITUTIONAL ordinance making it a crime in NYC to say “illegal alien” (a legal definition) or tell an illegal alien, “Go home,” claiming it “hate speech” punishable by up to a $250,000 fine, all while incessantly whining about Trump’s supposed “violations” of the Constitution.  Has DeBlasio no shame?  Is he so consumed by hate that he cannot see himself, even in a mirror?  BTW, DeBlasio spends roughly seven hours A MONTH being mayor, yet wanted to run America as President.  Being Mayor of New York is obviously beneath him and only the presidency is good enough for “His Honor.”  Dang it!

Speaker Pelosi said that pursuing impeachment, even in the face of certain defeat in the Senate, would be worth Democrats’ losing the House next year.  Yet, addressing the many issues confronting America is NOT worth Democrats keeping the House and possibly winning the Senate and White House.  I know I’M impressed!  THAT’S thinking strategically!

Can someone show me where I’m wrong?  I’m from Missouri, the ‘Show Me’ State.  Show me.