Solomon on Joe Biden, Ukraine: “Somebody’s Not Telling the Truth”

“WE NEED TO GET TO THE BOTTOM OF THAT”

(Sep. 27, 2019) — Investigative journalist John Solomon reported Thursday night that a large cache of documents he has acquired over the last 18 months show that attorneys for Hunter Biden who met with the replacement Ukrainian prosecutor for then-terminated prosecutor Viktor Shokin determined that Shokin was unjustly fired in March 2016.

Shokin had been investigating Burisma Holdings, on which Hunter Biden sat as a member of the Board of Directors.  Hunter Biden is the son of former putative Vice President Joe Biden. In January 2018, the elder Biden bragged during an appearance at the Council on Foreign Relations (CFR) that he successfully pressured then-Ukrainian President Poroschenko to fire Shokin during the course of his probe into Burisma.

Biden would have withheld $1 billion in U.S. aid to Ukraine had Poroschenko not acquiesced to his demand before he left Ukraine within the next “six hours,” Biden told the audience at the CFR symposium.

In April 2019, Portion cult lost his reelection bid to Volodymyr Zelenskiy, the transcript and other details of which are now the subject of a “whistleblower” complaint which some say was drafted with the obvious assistance of lawyers.

The documents in his possession emanated from official sources, Solomon said, including the Ukrainian Embassy in Washington, DC; emails exchanged among Hunter Biden’s legal team representing Burisma; the U.S. State Department, and the Ukrainian prosecutor general’s office.  All were acquired “on the record,” Solomon reported Wednesday.

These documents show, as I report tonight for the first time, that the very day that Joe Biden managed to get that Ukrainian prosecutor, Mr. Shokin, fired, that very day, his son’s company’s lawyers, the American lawyers helping Hunter Biden’s Burisma company, tried to fight this investigation, were trying urgently to reach the new prosecutor, the replacement prosecutor. One week later, they managed to get that meeting. They’re in Ukraine less than a week after Biden fires the prosecutor, and in that meeting, according to the official record of the meeting from the prosecutors, the lawyers for Hunter Biden’s company and the lobbyists for Hunter Biden’s company, stated to the replacement prosecutor, “We know that the information calling Mr. Shokin corrupt and inept was ‘false information’ distributed by U.S. government officials and other figures.  We are sorry for that.  We would like to make this up to you by bringing you to Washington or connecting you with the Obama administration officials so you can tell them the true story, that you did have a legitimate investigation against Burisma and you were not corrupt and you have instigated numerous reforms.”

“That is the official record of the meeting Ukrainian prosecutors kept,” Solomon said.  “A few days later, Hunter Biden’s American lawyers…sent a follow-up email trying to make good on their promise to bring these new prosecutors to Washington to explain the dirty-tricks campaign that had been run against Mr. Shokin and to clear the air.  If Joe Biden forced the firing of this prosecutor on the grounds that he was corrupt, and Hunter Biden’s lawyers go and say that was false information, somebody’s not telling the truth. We need to get to the bottom of that.”

Hunter Biden was making $50,000 a month from his Board membership, multiple sources have reported.  On April 1, 2019, Solomon reported, “U.S. banking records show Hunter Biden’s American-based firm, Rosemont Seneca Partners LLC, received regular transfers into one of its accounts — usually more than $166,000 a month — from Burisma from spring 2014 through fall 2015, during a period when Vice President Biden was the main U.S. official dealing with Ukraine and its tense relations with Russia.”

In June, Shokin reportedly told ABC News, “Biden was acting not like a U.S. vice president, but as an individual, like the individual interested in having me removed — having me gone so that I did not interfere in the Burisma investigation.”

Solomon reported his uploading of an affidavit signed by Shokin in which Shokin stated that the Obama regime “had substantial influence on the entire law-enforcement system of Ukraine.”   Shokin said he submitted a “voluntary resignation” “at the request of President Poroschenko.”

“The truth is that I was forced out because I was leading a wide-ranging corruption probe into Burisma Holdings (“Burisma”), a natural gas firm active in Ukraine, and Joe Biden’s son, Hunter Biden, was a member of the Board of Directors,” Shokin continued.  “I assume Burisma, which was connected with gas extraction, had the support of the US Vice-President Joe Biden because his son was on the Board of Directors.” 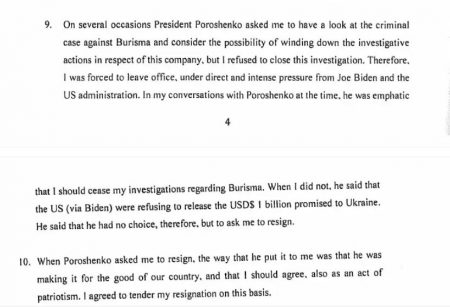 5 Responses to "Solomon on Joe Biden, Ukraine: “Somebody’s Not Telling the Truth”"