(Sep. 17, 2019) — Today is Constitution Day. The signing of the Constitution for the United States of America took place on September 17th, 1787.  That was two hundred and thirty two years ago. Thirty-two years ago, during the bicentennial of that precious document’s signing I founded Society for the Preservation of Democracy and Human Rights.

The name of the Society has since been changed in order to reflect more precisely what it was founded to do, its mission.

Its mission is the preservation of our American Republic.  As Benjamin Franklin once said, “We have a republic, if we can keep it.”  That is the Society’s motto.

Another quote comes to mind, one used by the current “Sons of Liberty”:

This republic was not established by cowards and cowards will not preserve it.

Two hundred and thirty two years is not a long time in the historical scheme of things. Our nation is still young in that grand scheme considering that there are nations that have been in existence for thousands of years. “We the People” have a republic if we can keep it.  It is every American’s solemn duty to be proactive in preserving our rights to Life, Liberty and the Pursuit of Happiness for ourselves and our “Posterity” (Offspring).

Things that are happening now, here in the United States, are putting a severe strain on the seams that hold this nation of freedom-lovers together.  We have anti-American sentiment trying to overtake the Constitution’s guarantees which are outlined in the Bill of Rights. These rights are not acceptable to wannabe dictators and despots. They are anathema to controlling the proletariat, a Marxist term referring to the common working man and woman. “Power Corrupts and absolute power corrupts absolutely” said the wise fellow Lord Acton.

Our founders lived in 18th century England, Scotland, Ireland, Cornwall and Wales. They came here to escape religious persecution and the repercussions of the exercise of authority and power by an absolute monarch. The founders knew what they left and knew what they had to do to create a different type of government that would escape such tyranny and oppression as was visited upon them in the Kingdom of King George III.

These were learned men. It took a lot of effort to formulate and design a new government that would place the people in charge of themselves instead of being oppressed by the maniacal whims of a power-hungry despot like King George III.  King George III was also ill. His mind was not working properly because of arsenic poisoning which was a result of his being treated for genetic porphyria with emetic tartar.

The maniacal machinations that were exhibited by King George III, known as “the crazy King,” combined with his absolute power, led to an untenable situation for any British subject caught in his grip. Call it fate. Call it coincidence.  The fact is that King George was becoming unbearable in his “long train of abuses and usurpations” against his subjects.

King George III was evincing an effort to exercise “an absolute tyranny over these States.”  The founders delineated a litany of abuses committed by King George III against his subjects in the thirteen colonies. 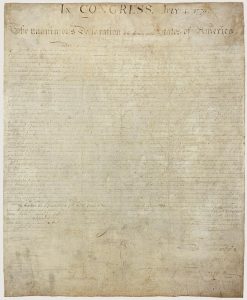 Declaring on July 4th, 1776 that “These united colonies are and of right ought to be free and independent States that they are absolved from allegiance to the British Crown,” the Declaration of Independence dissolved all connections with the British Crown. Furthermore, the founders pledged to each other in support of said Declaration their “Lives,” their “fortunes” and their “sacred honor.”  We can do no less in support of this nation. It was Ronald Reagan who said:

“Freedom is never more than one generation away from extinction. We didn’t pass it on to our children in the bloodstream. It must be fought for, protected and handed on for them to do the same, or one day we will spend our sunset years telling our children and our children’s children what it was once like in the United States where men were free.”

On this Constitution Day 2019. please meditate on what I have said. The nation is under siege from those who would see its demise. We have socialists, communists, Islamic radicals and other anti-American miscreants doing whatever they can get away with in order to take this nation over and to place “We the People” under tyrannical control and oppression.

Freedom is not free. “We the People” have to be very strong and we must be “ever vigilant.” The United States is not invulnerable to domestic or foreign enemies. The current political abuses being undertaken by the morphed Democratic Party to remove President Trump from office in any way they can is prima facie evidence that the USA is under attack by Deep State operatives.  Keep your powder dry. Don’t give up your weapons for any reason. “The Second Amendment is the reset button of the Constitution,” said Doug McKay.  The first premise of Marxism is to disarm the people.

Take heed. Have a blessed and happy Constitution day and stay strong against tyranny.

Robert C. Laity
Founder and President
Society for the Preservation
of our American Republic