“I WAS REALLY, REALLY BOTHERED BY IT”

(Mar. 13, 2019) — On page 84 of the first of two transcripts from former FBI Counsel Lisa Page’s closed-door interviews with two congressional committees last summer, Page admits to having become “incredibly upset” after then-presidential candidate Trump responded to Atty. Khzir Khan, who was sharply critical of Trump at the DNC.

On page 86 of the transcript, Page states that she is 38 years old.

During his guest address, Khan spoke about the son he and his wife lost in Iraq in 2004 and stated his vehement opposition to Trump’s stated policies on immigration.

“We can’t solve our problems by building walls and sowing division. We are stronger together. And we will keep getting stronger when Hillary Clinton becomes our next president,” Khan said after accusing Trump of having “sacrificed nothing and no one.”

In response, Trump tweeted, as the Khans were being interviewed on CNN, “Mr. Khan, who does not know me, viciously attacked me from the stage of the DNC and is now all over T.V. doing the same – Nice!”

In response, Khan said that Trump was missing “basic character,” to which Trump tweeted, “This story is not about Mr. Khan, who is all over the place doing interviews, but rather RADICAL ISLAMIC TERRORISM and the U.S. Get smart!”

The same day, Trump told ABC’s George Stephanopoulos that Khan “seems like a nice guy to me.”

The day after that exchange, Khan was noted to have removed his website detailing his legal practice in which he reportedly “specialized in Muslim immigration.”

Page is among approximately 25 high-ranking individuals at the FBI and Justice Department who were fired, resigned, or demoted between the time Trump took office in January 2017 and August 2018.  While working on the FBI’s “Russia collusion” investigation and following the “Mid-Year Exam” probe into Hillary Clinton’s use of a private email server, Page was found to have exchanged thousands of text messages with then-FBI counterintelligence agent Peter Strzok.

In May Page resigned from the FBI, where she had served as the deputy director’s legal counsel.  Like Page, Strzok was a member of the team who worked on both investigations.  He was fired last August after testifying publicly to the same two congressional committees.

Both Page and Strzok were referred to the DOJ’s Office of Professional Responsibility (OPR) for further review of their conduct as a result of a 568-page Inspector General’s report which found their text exchanges questionable.

Page had earlier told an attorney for then-House Oversight Committee ranking member Elijah Cummings (p. 80) of the FBI that “We are all entirely capable of holding personal political views and putting our duty to be fair and to follow the rules above all else.  That is what defines the FBI.”

A different questioner then turned back to the topic of the text messages, which had been queried about earlier in the session.  On page 83, Page said she was “interviewed by the inspector general eight times over, like, 36 hours about my text messages and an innumerable number of other topics.”

The texts were exchanged with now-fired FBI counterintelligence agent Peter Strzok, with whom Page admitted she was “in a relationship” on page 85. both were reportedly married to other people, with Strzok’s wife being employed as an associate director at the Securities and Exchange Commission.

“He’s not ever going to become President, right? Right,” the text read, to which Strzok had responded, “No, he’s not, we’ll stop it.”

Page then explained “the context” as: 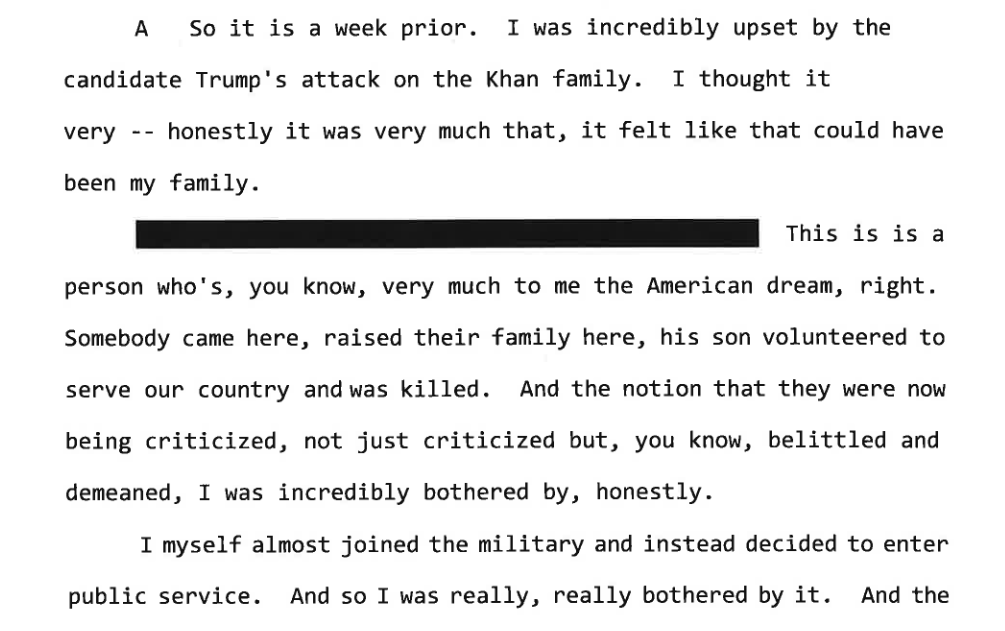 Page summarized Strzok’s response to her as “just an attempt to just sort of comfort, although, it is sort of empty words but.” [sic]

In response to whether or not the intent of Strzok’s text was to “stop Donald Trump from becoming President,” Page said: 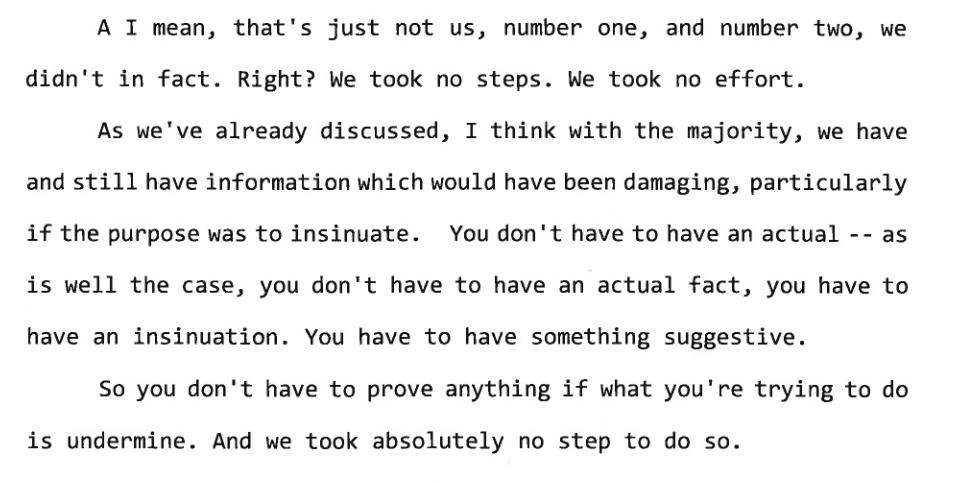