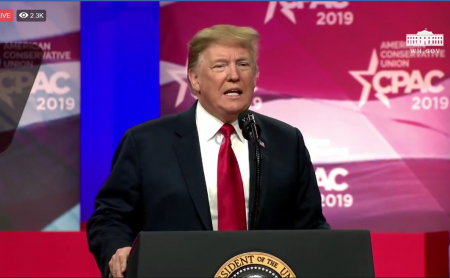 The ACU sponsors the event each year in National Harbor, MD during the late winter.

Before taking his place at the podium, Trump hugged the flag on its stand placed near his point of entrance to the venue.

The White House is livestreaming Trump’s remarks on its Facebook page.

Saturday is the last day of the conference, which began on February 28.

Trump spoke briefly about his recent trip to Vietnam, where he met with North Korean dictator Kim Jong-Un.  Unlike the prior summit last June, no agreement between the two nations was signed, as Trump said he was not comfortable with the terms.

At 12:25 p.m., a group of what sounded like young people chanted something, after which Trump addressed them by saying he was “off-script.”

“Thank you, darling,” he appeared to say to one of the chanters, after which the chanting stopped.

He then said he won the election by “going off-script.”

He spoke about a nation which once was flush with money, so much that Americans “didn’t know what the h*** to do with it.”

2 Responses to "Trump Speaks at CPAC"