READING, BEING RUDE OR BOTH? 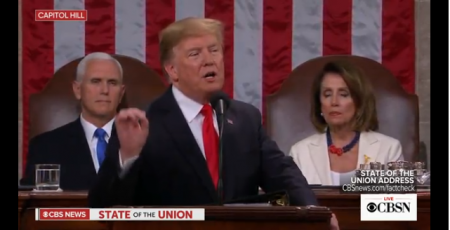 (Feb. 5, 2019) — Speaker of the House Nancy Pelosi periodically picked up an array of oversized papers and perused them during President Donald Trump’s State of the Union speech on Tuesday night.

At times she put down the stack of documents and applauded along with others when Trump finished a thought; at others, she appeared to be mouthing something to either Vice President Mike Pence or to other unknown parties.

Like many other women in the House chamber, Pelosi was wearing all white, an unusual selection for the middle of winter.

Approximately 20 minutes into the speech, Trump urged Congress not avoid “investigations” in favor of “legislation” and “unity at home,” during which the camera panned to House Intelligence Committee Chairman Adam Schiff (D-CA).

Most Democrats notably did not applaud at any of Trump’s pauses, while some broke with their peers and applauded when Trump enumerated his administration’s accomplishment in the fields of energy production and exportation, manufacturing, employment of minorities and the disabled, and space exploration.

Pelosi generally maintained a slight smile as Trump spoke, although at times she appeared to exhibit bewilderment. At one point, she stood and applauded with others while extending her arms in Trump’s direction. 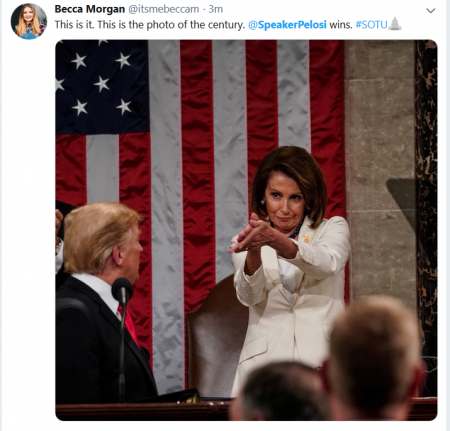 At 9:33 p.m., after Trump changed the topic to immigration and said he intends to render drug smugglers “out of business,” Sen. Kamala Harris (D-CA), a 2020 presidential candidate, shook her head “No.”  Harris and fellow Democrat presidential candidate Kirsten Gillibrand were wearing black. 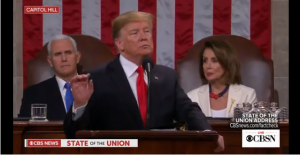 After Trump introduced Border Patrol agent and legal immigrant Elvin Hernandez, Pelosi picked up her stack of papers again.  She often moved her lips as if they were dry, alternately smiling.

When Trump said that “we have more women in the workforce than ever before, the congresswomen dressed in white stood and applauded.  “We also have more women serving in Congress than at any time before,” Trump declared as the white-clad women congratulated each other.

Pelosi stood at that point and appeared to be silently communicating with parties in the audience.

When Trump at 9:51 p.m. EST spoke about China, trade and domestic manufacturing with the words “made in the USA,” Pelosi stood but looked through her papers again.

She stood enthusiastically and applauded when Trump said that lowering the cost of prescription drugs is important to his administration.