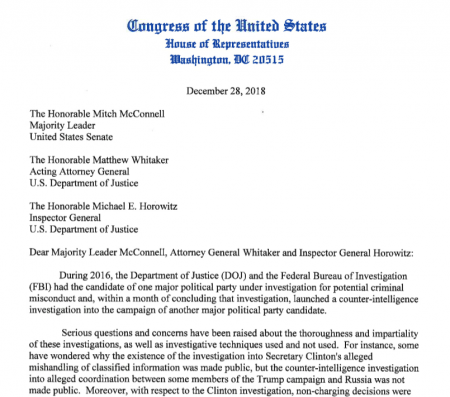 The last two pages of the letter contain signatures and additional parties to whom the letter was copied, including the president and current FBI Director Christopher Wray.

Early in 2015, the government-watchdog organization, Judicial Watch, discovered that Clinton and her aides had used an email system outside of the customary.gov domain name. In ongoing litigation, Clinton has reportedly said that she used the system, previously established for her husband, former President Bill Clinton, out of “convenience.”

Hillary Clinton has admitted to destroying approximately 33,000 emails which she deemed personal in nature, sent while she served as Secretary of State under Barack Hussein Obama between 2009 and early 2013.  According to federal statute and State Department policy, all emails sent in the course of conducting government business are to be preserved.

At some point in 2016, the FBI opened a counterintelligence probe into the Trump campaign for alleged “collusion” with Russian operatives to gain an election advantage. Trump’s November 6, 2016 victory over Clinton, an entrenched political operative and former First Lady and U.S. senator, was a shock to many in the Beltway.

The authors of Friday’s letter are retiring from Congress on January 3, when the 116th Congress will be sworn in. At that time, having won a majority of seats in the House of Representatives, Democrats will control the chamber and chair its committees.

On Saturday morning, “House Republicans” was trending briefly on Twitter, with many critics of the Republican-led probe claiming that the two committees failed to issue a report and found no evidence of wrongdoing on the part of investigators.

An article posted at Fox News containing content from the AP bears the title, “House probe of FBI-DOJ’s alleged anti-Trump, pro-Clinton bias hits unceremonious end — with no report.”  The word “unceremonious” is twice repeated in the article.  Whether or not the column presents opinion as fact is a question for the reader to decide.

The FBI’s probe into Clinton’s use of the private server, dubbed “Mid-Year Exam,” formally ended on July 5, 2016 when then-FBI Director James Comey gave a solo press conference in which he stated that “no reasonable prosecutor” would recommend criminal investigation of Clinton or any of her aides.

Shortly before Trump’s inauguration in January 2017, DOJ Inspector General Horowitz announced he would undertake an investigation of allegations into political bias on the part of FBI and DOJ officials during the presidential campaign. In June of this year, Horowitz issued a 568-page report stating that bias was found on the part of now former FBI counterintelligence second-in-command Peter Strzok and former FBI Counsel to the Deputy Director Lisa Page. The two exchanged more than 50,000 text messages, some of which Horowitz subsequently discovered were purged by the DOJ and apparently permanently lost, a finding announced in a report issued earlier this month.

A summary of the scope of the June 14 report and its findings is here.

Thus far, no announcement has been made that anyone will be prosecuted for potentially destroying evidence from the devices used by Strzok and Page, although Trump attorney and former New York City Mayor Rudy Giuliani has called for the launch of an investigation.

In their letter, Gowdy and Goodlatte referred to Horowitz’s political-bias report wherein Comey was faulted for breaking agency protocol and announcing a disposition as to the Clinton server investigation rather than deferring to the Justice Department.

Horowitz’s findings included the fact that the FBI had already decided it would not recommend Clinton for criminal prosecution months before Clinton was interviewed by Strzok and another agent on July 2, 2016.

Page resigned from the Bureau in May, while Strzok was fired in August. An unprecedented number of FBI officials preceded their departure from the agency, including Comey in May of last year through firing; his Chief of Staff, James Rybicki; FBI Chief Counsel James Baker; and one-time Acting Attorney General Sally Yates by firing in January 2017, among numerous others.

After Comey was terminated on May 9, 2017, Deputy Attorney General Rod Rosenstein hired former FBI Director Robert Mueller to assume the FBI’s “collusion” investigation and appointed him “Special Counsel.” Mueller proceeded to hire 17 prosecuting attorneys, virtually all of whom had given to Democrats in the recent past. Two of the attorneys had respectively served as counsel for Clinton and Obama deputy national security adviser Ben Rhodes.

Mueller has not yet issued a report on his findings as to whether or not anyone in the Trump campaign “colluded” with Russia. Trump has insisted from the beginning that the Mueller operation is a “witch hunt,” a waste of taxpayer dollars and that neither he nor anyone else in the campaign colluded to win the election over Clinton.

In lieu of a face-to-face interview, Trump’s legal team arranged for him to answer written questions for Mueller’s probe which were submitted in late November. According to Democratic strategist Mary Anne Marsh, Democrats are seeking a Mueller subpoena of Trump and will “take it all the way to the Supreme Court” if necessary.

On Saturday morning, a report on “Fox & Friends” stated that House Democrats are in the process of opening up new staffer positions in anticipation of launching a myriad of investigations into Donald Trump’s personal, business, and presidential activities as a partial government shutdown resulting from an impasse over the border wall Trump wants to build enters its second week.

An appropriations bill expired at midnight on December 21, with proposals to replace it failing to pass both chambers of Congress and Trump refusing to sign any bill which did not include funding for the border wall. Originally asking for $25 billion, more recently Trump said he would accept a $5 billion down-payment to build and/or repair fencing and border structures in an attempt to reduce the number of illegal border crossings at the U.S.-Mexico border.

Rep. Nancy Pelosi, who is expected to be elected Speaker of the House next month, and Senate Minority Leader Chuck Schumer have vowed to provide no appropriations for a border wall, although insisting that they are in favor of “border security” in general.

Over the first two years of Trump’s presidency, Congress failed to pass “immigration reform,” which many across the political spectrum say is necessary, including Trump.

Pelosi has said that she believes a border wall is “immoral.” Early last year, flanked by a woman in Islamic garb, Schumer appeared to fight back tears after Trump issued an executive order temporarily denying entry into the country to individuals from seven Muslim-majority countries, an order later revised and upheld by the U.S. Supreme Court.

In 2009, Schumer took the position that “illegal immigration is wrong” and “we have to change it.”

On page 3, Gowdy and Goodlatte reported that Baker testified that Rosenstein had suggested “wearing a recording or transmitting device” to secretly record Trump and considered making the case that Trump is unfit for office under the 25th Amendment.  Rosenstein has denied the claims, which were reported by The New York Times on September 21, 2018.

As noted in the letter, the Oversight and Judiciary Committees had attempted on two occasions to interview Rosenstein under oath in private, neither of which materialized.

On page 5, the chairmen stated that their probe “was impacted by institutional protectionism on the part of DOJ and FBI…DOJ continues to refuse to declassify documents necessary to the investigation despite the Presidents request the documents be declassified…”  They recommended additional investigation by a second Special Counsel, as a number of Republicans repeatedly requested of then-Attorney General Jeff Sessions.

The day after the 2018 midterm elections, Trump asked for Sessions’s resignation, which was expected by many observers for some time.

On the December 16 edition of “Sunday Morning Futures,” House Intelligence Committee Chairman Devin Nunes, who will relinquish the chairmanship on January 3, said that although assuming a minority position, committee Republicans plan to continue investigating the reasons behind the DOJ and FBI’s applications for surveillance warrants on former Trump campaign advisor Carter Page. The four applications included as evidence the now-infamous Trump-Russia “dossier.”  The Foreign Intelligence Surveillance Court (FISC) was not told that the dossier was a political-opposition product, compiled by a former British intelligence agent and paid for by the DNC and Clinton campaign.

The warrants allowed for the collection of Page’s communications for a year, which undoubtedly extended to numerous other campaign staffers, advisors, and members of Congress.

After Nunes on February 2 released the Republican-authored memo concerning circumstances surrounding the FISA applications on Carter Page, Democrat committee member Adam Schiff (D-CA) stated that Democrats would conduct their own further investigation into Trump-Russia “collusion.”  As of this writing, committee Democrats have not provided an update concerning those stated efforts.

Schiff, who firmly believes in “protecting Mueller,” is expected to be the next House Intel Chairman as of January 3.