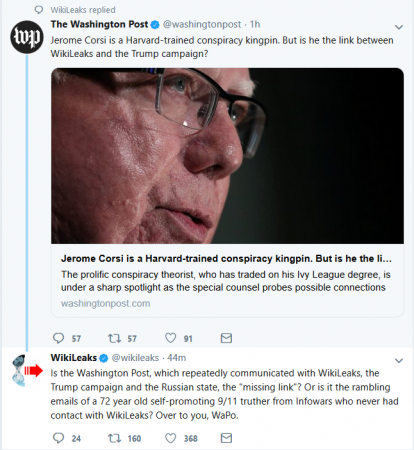 (Nov. 28, 2018) — On Wednesday morning, The Washington Post published an article describing Dr. Jerome Corsi as “a Harvard-trained conspiracy kingpin” with its subheading asking, “But is he the link between WikiLeaks and the Trump campaign?”

The question, of course, presupposes a link exists between the open-government website WikiLeaks and the 2016 presidential campaign of now-President Donald Trump.

Corsi, 72, has authored 20 books, is a former banking executive, and, more recently, the former Washington Bureau Chief of Infowars.  He has been particularly reviled in the press for his 2004 book titled, “Unfit for Command: Swift Boat Veterans Speak Out Against John Kerry” co-authored by John O’Neill, and for his 2011 solo book, “Where’s the Birth Certificate?: The Case that Barack Obama is not Eligible to be President.”

As a result of the latter, Corsi is frequently called “a birther,” as he was by Harvard Law school professor emeritus Alan Dershowitz on the November 25 edition of “Sunday Morning Futures.”

Dershowitz applied the label during an interview with Fox Business Network’s Trish Regan, who was sitting in for regular SMF host Maria Bartiromo. The New York Times and other outlets have invoked it not only in reference to Corsi, but also to Donald Trump, who first publicly questioned Barack Hussein Obama’s constitutional eligibility to serve stemming from a lack of released and verifiable documentation of his birthplace.

In a number of mainstream media interviews since Monday morning, Corsi said that Special Counsel Robert Mueller’s probe attempted to coerce him into admitting to perjury during and after hours-long interrogation periods as to whether or not he had advance knowledge of emails WikiLeaks would release in the last months for the presidential election.

In May 2017 Mueller was hired by Deputy Attorney General Rod Rosenstein to assume the FBI’s counterintelligence investigation into the Trump campaign for alleged “collusion” with Russia and the extent to which Russian operatives might have attempted to interfere in the 2016 US elections.  Thus far, no American has been indicted for “collusion” or for election-meddling.

A document alleging that Corsi lied to Mueller’s investigators refers to Corsi as “the defendant” and implies that he attempted to communicate with “Organization 1,” believed to be WikiLeaks.  Paragraph 7 on pp. 4-5 of the document,. the final statement of the draft indictment, is arguably confusing.

Corsi said immediately after announcing Mueller’s offer of a plea deal that he would not sign it.

While many in the media have claimed that the Trump administration is stifling reporters’ First Amendment and free press rights, few have questioned whether or not Corsi’s alleged attempt to reach Assange would have been, in fact, a crime. In an interview with Tucker Carlson on Tuesday night, however, Corsi said he has never communicated in any way with Assange and that he pieced together himself the scenario by which WikiLeaks likely possessed emails relating to Hillary Clinton.

The Washington Post’s article appears in the column “Morning Mix” and is not labeled an opinion piece, which it undoubtedly is, as evidenced by its opening paragraphs:

The academic credential followed him to Washington in his role as bureau chief for Infowars, the disinformation empire founded by Alex Jones. It appears on the front covers of his many published books. And he brandished it on FreeRepublic.com, the right-wing Internet forum where he used ethnic and gay slurs against Muslims and Hillary Clinton, respectively, and called Katie Couric and John Lennon “communists.”

These are the phantasmagoric visions of Jerome Corsi, whose hate-filled ravings enjoy the air of authority because he earned a graduate degree in political science from Harvard in 1972. Now, he could help establish whether there were links between WikiLeaks and Donald Trump’s 2016 presidential campaign.

In response to The Post‘s tweeting of its article, WikiLeaks tweeted, “Is the Washington Post, which repeatedly communicated with WikiLeaks, the Trump campaign and the Russian state, the ‘missing link’? Or is it the rambling emails of a 72 year old self-promoting 9/11 truther from Infowars who never had contact with WikiLeaks? Over to you, WaPo.”

In its 12-year history, WikiLeaks has reportedly earned a 100% accuracy rate as to the secret government documents it has released from around the world.

In interviews Assange has repeatedly said that the Clinton and DNC emails he published in 2016 were not provided by Russia or any “state party,” contradicting the narrative put forth by the U.S. intelligence community and parroted by American media.

As of press time, WaPo does not appear to have responded to WikiLeaks, at least through Twitter.