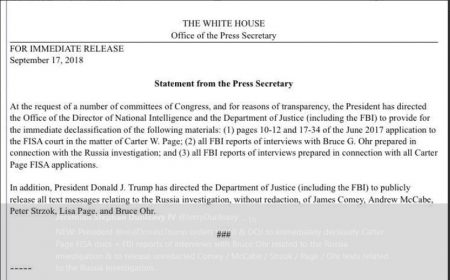 A number of commentators and journalists have reported over the last two weeks that Trump’s declassification of the documents was a matter of “days.”

House Intelligence Committee Chairman Devin Nunes has said that the documents contain “exculpatory information” contradictory to the unverified “Russia dossier” presented by FBI and DOJ officials to the Foreign Intelligence Surveillance Court (FISC) between October 2016 and June 2017 to conduct surveillance on Page.

Text messages released thus far exchanged between former counterintelligence deputy chief Peter Strzok and former FBI counsel to the Deputy Director Lisa Page (no relation to Carter Page) show a bias which caught the attention of the DOJ’s Inspector General, Michael Horowitz, after he began his investigation into allegations of misconduct among the nation’s chief law-enforcers in the months leading up to the 2016 presidential election.

FISA application documents released in July show that the FBI told the court that Carter Page was “an agent of a foreign government,” namely, Russia, making the surveillance warrants necessary. It appears to many that the bulk of the “evidence” submitted to the court was the dossier, compiled by former British spy Christopher Steele and paid for by the Democratic National Committee (DNC) and the Hillary Clinton campaign.

The court was not informed that the dossier was a political product and, according to documents released several weeks ago, held no hearings on the Carter Page applications. The documents were heavily-redacted.

Since Donald Trump took office on January 20, 2017, more than a dozen FBI and DOJ officials have resigned, been demoted or fired. Former FBI Director James Comey was terminated in May of last year and his former deputy, Andrew McCabe, terminated last March after he was accused of having been untruthful with the Inspector General’s office about media leaks.

Strzok and Lisa Page appear to have been interested in derailing the Trump campaign, and, failing that, the Trump administration. Strzok was fired in July, while Lisa Page resigned from her post in early May.

In one text, Strzok is seen congratulating Lisa Page about an April 2017 article appearing in The Washington Post informing the public about the initial warrant on Carter Page.

Strzok testified to members of the House Intel and Judiciary Committees that his political opinions did not affect his work at the Bureau, where he worked for 22 years.

Interview transcripts from interviews the FBI conducted with current DOJ official Bruce Ohr, who was demoted twice, are also to be released, the White House said. Text messages released late last month show Ohr and Steele in regular communication both before and after the presidential election.

Ohr’s wife worked for the company which served as an intermediary between the DNC/Clinton campaign and Steele.  Bruce Ohr has testified behind closed doors to members of Congress; Nellie is expected to appear this week.

On Sunday, Nunes told “Sunday Morning Futures” host Maria Bartiromo that he expected interviews his committee has conducted with approximately 70 individuals to be made public after consulting with the ODNI, which he believed would be completed within the next several weeks.