FOUNDER ON PERISCOPE WITH LIVE UPDATE 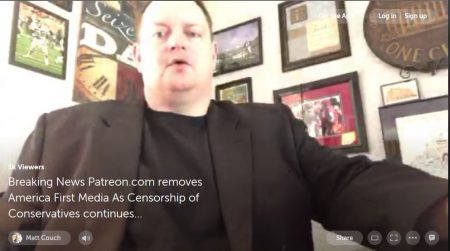 (Aug. 16, 2018) — Matt Couch, founder of America First Media Group, was reporting live at 4:41 p.m. on Periscope and Spreaker that his Patreon site was closed down without warning on Thursday afternoon.

“They are literally trying to silence conservatives across the country,” Couch said.

Couch’s organization has been investigating the murder of DNC Data Director for Voter Registration Seth Rich more than two years ago  in Washington, DC, with two significant updates provided over the last five weeks.

Other items AFMG has been probing are the October 1, 2017 attack in Las Vegas which killed dozens and injured many more as well as the mysterious death of another DNC-related individual, Shawn Lucas.

From the beginning of the 21-minute broadcast, Couch attributed the page’s removal to continued Internet censorship of “conservatives.”  Patreon is a popular fundraising site which provides”creators” a free site and takes 5% of the creator’s donations, which come from “patrons.”

The Post & Email noted that entries for broadcasts and articles Couch had posted there remain active as of press time but when clicked, lead to “This page has been removed.”