DiGenova: Signers of FISA Court Applications Should be Held to Account

“THIS CASE IS OVER” 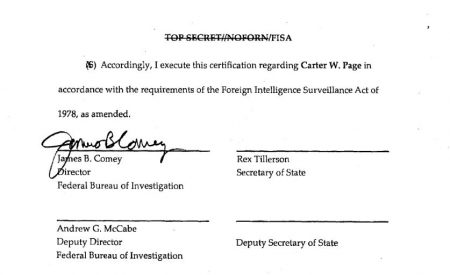 (Jul. 25, 2018) — On Wednesday night’s “Hannity,” former U.S. Attorney for the District of Columbia Joseph DiGenova said that in his view, the “Russia” investigation conducted by former FBI Director Robert Mueller, at the direction of Deputy Attorney General Rod Rosenstein, “is over.”

DiGenova made it clear that he believes all individuals involved in signing applications to the Foreign Intelligence Surveillance Court (FISC) to surveil former Trump campaign adviser Carter Page based on the unverified Trump-Russia “dossier” should be held accountable for their alleged wrongdoing.

Warrants were granted to the FBI and DOJ to collect Page’s communications on the claim that Page was “an agent of a foreign power,” namely, the Russian Federation, made by FBI and DOJ officials and “Special Agents,” many of whom remain unnamed.

DiGenova, a frequent guest on the show, has said for many months that the Russia investigation, which encompasses the allegation that members of the 2016 Trump presidential campaign “colluded” with the Kremlin to affect the outcome of the election, should be shut down.

Rosenstein, who has a long professional history with Mueller, hired the former FBI director to continue the FBI’s probe into the Trump campaign relative to Russia “collusion.”  Rosenstein is also professionally acquainted with Comey, a potential witness to 2016 DOJ and FBI conduct in both the Trump and Hillary Clinton email server probes.

DiGenova’s appearance came after Hannity discussed the breaking news earlier on Wednesday that 11 members of the House of Representatives filed Articles of Impeachment against Rosenstein for allegedly withholding subpoenaed documents, “hiding text messages” and generally acting in bad faith in response to congressional requests.

Later on the show, one of Trump’s attorneys, Rudy Giuliani, said that he believes Mueller “wants” to complete the Russia investigation prior to the November midterm elections.

DiGenova: Signers of FISA Court Applications Should be Held to Account added on Wednesday, July 25, 2018