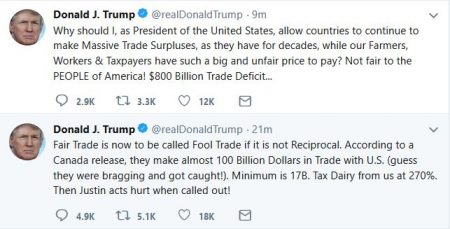 (Jun. 10, 2018) — Several minutes after 9:00 p.m. EDT and 12 hours later in Singapore, where President Donald Trump is readying for his face-to-face meeting with North Korean dictator Kim Jong-Un, Trump tweeted his dissatisfaction with the outcome of the G7 meeting from which he departed on Saturday a half-world away in Quebec, Canada.

Trump has made it a hallmark of his administration to seek ways to renegotiate trade agreements such as NAFTA which he feels are injurious to American workers and the U.S. marketplace.  One of his specific objections is that Canada charges a 270% import tariff on milk and other dairy products from the U.S.

On May 31, Trump imposed new tariffs on aluminum and steel imports from Canada, Mexico and the European Union (EU), prompting leaders of those countries to say they would “retaliate” with new tariffs on U.S. goods.  The media has since predicted that Trump has brought on a “trade war” with traditional U.S. allies and China.

According to both Trump and Trudeau initially, the G7 Summit was a cordial meeting of the leaders of seven Western trading partners resulting in a “communiqué” with which all parties reportedly agreed. Other sources reported it as having been contentious.

“They fully understand where I am coming from,” Trump had tweeted after departing Canada for North Korea.

However, after Trump departed for Singapore at midday on Saturday, Canadian Prime Minister Justin Trudeau gave a press conference during which he said that he would not allow the U.S. to “push around” his country on trade, a move which angered Trump and members of his administration.

Prior to the summit, Trudeau made a similar statement on NBC’s “Meet the Press.”

On Saturday evening Trump claimed that Trudeau made “false statements” at the “news conference” and ordered his remaining G7 representatives not to sign the communiqué.

While still at the G7, Trump had given his own presser in which he advocated for no trade tariffs on U.S. exports or imports from other countries.

Following Trump’s vehement objection to Trudeau’s announcement that he would impose new tariffs on U.S. goods effective July 1, one mainstream media report said that Trump had “thrown the G7 into disarray.”

After two days of often fierce arguments between the United States and both the summit hosts and Europe, the organization issued a joint statement which attempted to paper over their cracks.

But the attempts to convey at least a semblance of unity were undermined when Canada’s Prime Minister Justin Trudeau confirmed he was going ahead with his tariffs against the US in response to US moves against his country’s steel and aluminium industries. [sic]

Canadian Prime Minister Justin Trudeau forcefully responded to Donald Trump’s trade threats at the Group of Seven summit in Quebec, vowing Saturday that Canada won’t be “pushed around” in a confrontation with the U.S.

The war of words between Trudeau and Trump escalated after the U.S. president left the meeting early. Trump fired back at Trudeau’s comments in a tweet later Saturday that called the Canadian leader “meek and mild” during the meeting of allies. The president also tweeted that he was revoking U.S. endorsement of the summit’s final joint statement.

Trump trade advisers Peter Navarro and Larry Kudlow claimed on Sunday that Trudeau “stabbed the president in the back” and “insulted us,” respectively.  On Sunday’s “Face the Nation,” Kudlow said that rather than Trump’s having “reneged on the G7 statement,” as anchor Margaret Brennan suggested, “Trudeau decided to attack the president. That’s the key point. And yes, you know if you attack this president he’s going to fight back. But here’s the key point Margaret, president is going to negotiate with Kim of North Korea and Singapore. It is a historic negotiation and there is no way this president is not going to stand strong. Number one he’s not going to allow the people to suddenly take pot shots at him. Hours before that summit and number two Trudeau should’ve known better.”

Kudlow also described Trudeau’s words as “a betrayal” of Trump and “the whole G7.”

As this story went to press, Trump issued two more tweets which appear to have completed his thoughts on the G7 while incorporating his resentment that in his view, European countries do not pay their share of NATO costs.  “…the U.S. pays close to the entire cost of NATO-protecting many of these same countries that rip us off on Trade (they pay only a fraction of the cost-and laugh!)…”

Shortly thereafter, he protested that “We protect Europe (which is good) at great financial loss, and then get unfairly clobbered on Trade. Change is coming!”

His next tweet changed the subject by expressing his sense of “excitement in the air” in Singapore in the final hours before he meets with Kim Jong-Un.  The summit is set for at 9:00 PM Monday night/9:00 AM Tuesday morning Singapore time.

Trump Tweets from Singapore on Results of G7 Summit added on Sunday, June 10, 2018