FROM “SPECIALIST” TO “LIEUTENANT,” BUT NOT WITHOUT INSULT

(Apr. 30, 2018) — In Part 1 and Part 2 of this series, Captain Gary Mason (retired) related his experience in the U.S. Army Infantry, which surprisingly included unexpected racism.

In 2000, Mason had already graduated from college with a degree in Communications when he decided to enter the service with a wife and child on the way.  An Army veteran herself, Mason’s wife Shahnaaz was shocked when he returned from the recruiter’s office having enrolled in the infantry, which serves as the offensive front line in times of war.

He began his military career at Ft. Benning, GA and after Basic Training was transferred to Ft. Lewis, WA, now Joint Base Lewis-McChord following a merger with an Air Force base.

Mason recalled being completely unprepared for any racism in the service and that in the event complaints arose, they generally did not reach the company commanders, but were dealt with, to a greater or lesser degree, by a lieutenant or sergeant in charge of individual platoons.

During Basic Training, Mason was designated a unit leader and related in Part 1 how he formed a close friendship with a white soldier who had originally refused to take orders from him.  Ironically, the drill sergeant who greeted him harshly upon his arrival at Ft. Benning enforced Mason’s authority, mandating to the recalcitrant soldier that racism would not be tolerated in the unit.

When he entered the Army, Mason’s intent had been to complete a four-year tour of duty and in the immediate, secure medical coverage for his pregnant wife.  The Iraq and Afghanistan wars were not foreseeable, although Mason ultimately deployed to both countries following the 9-11 attacks. 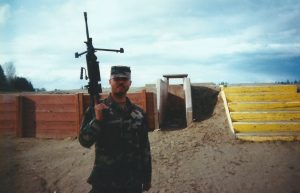 While at Ft. Lewis, Mason said that as an enlistee who was older than most of the new arrivals, he “started becoming like a Robin Hood.”  “I started intervening personally, because I was older and a little bit more mature, so I would try to break up the fights and guide some of the guys in the right direction,” he told The Post & Email.  “Then finally, my platoon leader said, ‘Gary, you’re always trying to rescue people. You’re rubbing people the wrong way because every time something happens, you’re always trying to correct the matter.  Have you ever thought about becoming a chaplain?  You seem to be Christian but you’re in this infantry environment.  They have a direct commissioning program to become a chaplain.  Why don’t you just go ahead and become an officer; you’ve done your enlisted time.  You’ll be more effective if you are in a position to counsel soldiers and make changes as a leader.”

At first I took it as an insult, kind-of like, “Oh, I can’t be a good infantry leader and you want me to get out and go be a chaplain.”  A lot of times, the infantry didn’t have much respect for chaplains because they’re not war fighters.  They were a bit older and were not always respected because many were out of shape and had not spent time doing traditional “grunt” work.

At that point, I shared with my wife what some of the leadership was saying, and then I met a black chaplain over at a gospel service at the chapel.  He said, “You have a degree? Then we could use you as a chaplain; it would be a direct commission to a captain.  Why are you wasting your time with this enlisted stuff?”

In the beginning, I wasn’t thinking about a career in the Army.  But my wife said, “Gary, it might not be a bad idea if you consider becoming a chaplain because you can help correct some of the wrongs you see in the Army.  You can do things for the right reason, and that would be your job.”

So after consideration, I decided, “This is exactly what I think I should do.  This might be my calling.”  Lo and behold, I went back and took my ASVAB again to increase my GT (general technical) and scored high.   I applied to get into the Chaplain Corps and I was accepted.  I became a direct-commission second lieutenant in the U.S. Army.

It was funny, because my commander didn’t really know about it when we were in the field one night doing some training.  This was just about the time 9-11 broke out, so I remember it was about 11:00 p.m. and we were out doing a live-fire exercise.  I had not received my orders to transfer, but I was promoted, and it came down from the Pentagon.

I was sleeping in the back of a truck because I was guarding the ammo.  I remember  hearing a fight break out on the side of the truck. They were talking about “Specialist Mason is now Lieutenant Mason,” and someone said, “I don’t care; I’m not ever saluting that n*****.”  I heard them outside the truck and a fight broke out. So when I jumped out of the truck, a lot of them stopped, and we broke up the fight.  Then I was called into the firing range field house, and all the officers from all of the platoons were there.  They were all white men, and there was me.  The captain walked in and said, “Mason, we have some news for you,” and I said, “What’s that?” and he said, “We got a call from the Pentagon today.”  I said, “OK.  What’s this about?”  So finally he said, “Specialist Mason, you’re no longer ‘Specialist Mason’; you’ve been promoted to Lieutenant.”

All of a sudden, I saw some of the other men in the room saying, “How did this happen?” They were shocked.  Then a platoon leader jumped up and said, “You need to stay the f**** away from me; I don’t f****** deal with chaplains.  You’re getting out of the infantry to become a d*** chaplain?  Don’t say s**** to me!” and he got up and stormed out.

And I said, “Hold up, Sarge, were you addressing me?  You stand at ease.” And all of a sudden, everybody got quiet.  Then he kind-of looked and broke out laughing.  I said, “Yeah, I’m a lieutenant now; you better shut up and stand at ease.”

“That must have shocked you,” The Post & Email commented.

Oh, yes, it did. I played it well.  I thought, “I already know how you guys feel about African-Americans, so I’m not even going to allow that to bother me.”

Soon after that, I was still waiting for orders to come down, and they kind-of felt like, “We’re getting ready to go to war and Mason is now turning his back on us.”  The way they saw it was, “This n***** got some rank, and now he’s an officer.”  The second definition was, “He’s going to become a chaplain, so he’s taking the easy way out.”

And I was thinking, no, this was a way for me to stay in the Army and better my career.  I figured I would keep serving my country and do what I do best, which is to help solve some of the problems.

The first thing I wanted to do was stop all of the racism going on.  I never knew how big of a fight I was getting ready to get myself into because my thought was, “Christ does not tolerate racism.”  So I thought I would do the Christian thing; I’m going to put together programs; I’m going to do all the things that the command here is not doing.  I’m going to start having cultural awareness, doing suicide prevention; I’m going to cut back on some of these sexual assaults. I had a big, grandiose plan of how I as a chaplain was going to implement change in the Army.  Little did I know I was getting ready to go down the road that I ended up going, which is where I am today without a job.

This article is also posted at Medium.com via AF.