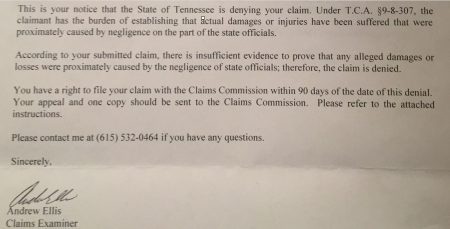 (Apr. 2, 2018) — On Thanksgiving Day 2017, Tennessee citizen Jamonica Taylor traveled two hours with her two young children to visit an inmate at the Turney Center Industrial Complex (TCIX) in Only, TN, as she had on that day for the previous two years.

What Ms. Taylor found to be different on that visit was that she was asked to leave her keys with the check-in officer, a Corporal Neal, before proceeding to the visiting area.  As she related to The Post & Email on December 12, she found the request unusual but readily complied.

Following her visit, when Ms. Taylor requested her keys back, she was told by Neal that “he couldn’t find them.”

As “panic” set in, Ms. Taylor reported, TCIX acting Associate Warden of Security Jason Clendenion arrived at the checkpoint and reportedly “was extremely rude, loud and arrogant” to her.  “Officer Clendenion’s cruelty to me and my young girls was shocking. He ordered us to leave the building,” Ms. Taylor wrote in a narrative of the events sent to The Post & Email last December.  “If he is going to treat a visitor in this way, I can only imagine how cruel he is to the inmates in his care!”

Her nightmare did not end there, however. As she related in her email, a locksmith was called to open the car door, costing her $75.00. The police were summoned, arriving after she and the children had waited between 30 and 45 minutes outside in the cold after being told to leave the shelter of the prison, Taylor said.  At that point, the police offered the children a warm place in their car while they waited for the locksmith to arrive, Taylor added.

Once the locksmith arrived and unlocked the car door, Ms. Taylor retrieved her cell phone from where she had left it and called a relative to ask for a ride home.  As a state employee herself, Taylor said she was “shocked” at the treatment she received from TCIX staff regarding her lost keys and the unceremonious ouster she was given on a cold Thanksgiving Day without transportation or the means to obtain food and heat for her two young children.

The following day, Ms. Taylor called TCIX to inquire as to whether or not her keys had been found and was reportedly told, “You have until Monday at 3:30 to remove your car from the premises.”  Ms. Taylor was therefore compelled to hire a towing company to retrieve her car at a cost of $475.00.  Still unable to operate it, Ms. Taylor told us, “On Monday, I had my car towed from my house to the Toyota place, and it cost $125. They also had to make me a new key, which cost $585. I had to miss work the day after Thanksgiving because I didn’t have a way to work. I took time off this week so I could get my car situated.”

In late December, she received a letter by certified mail from Genovese apologizing for the incident and indicating that her expenses, which totaled more than $1,300, would likely be reimbursed. 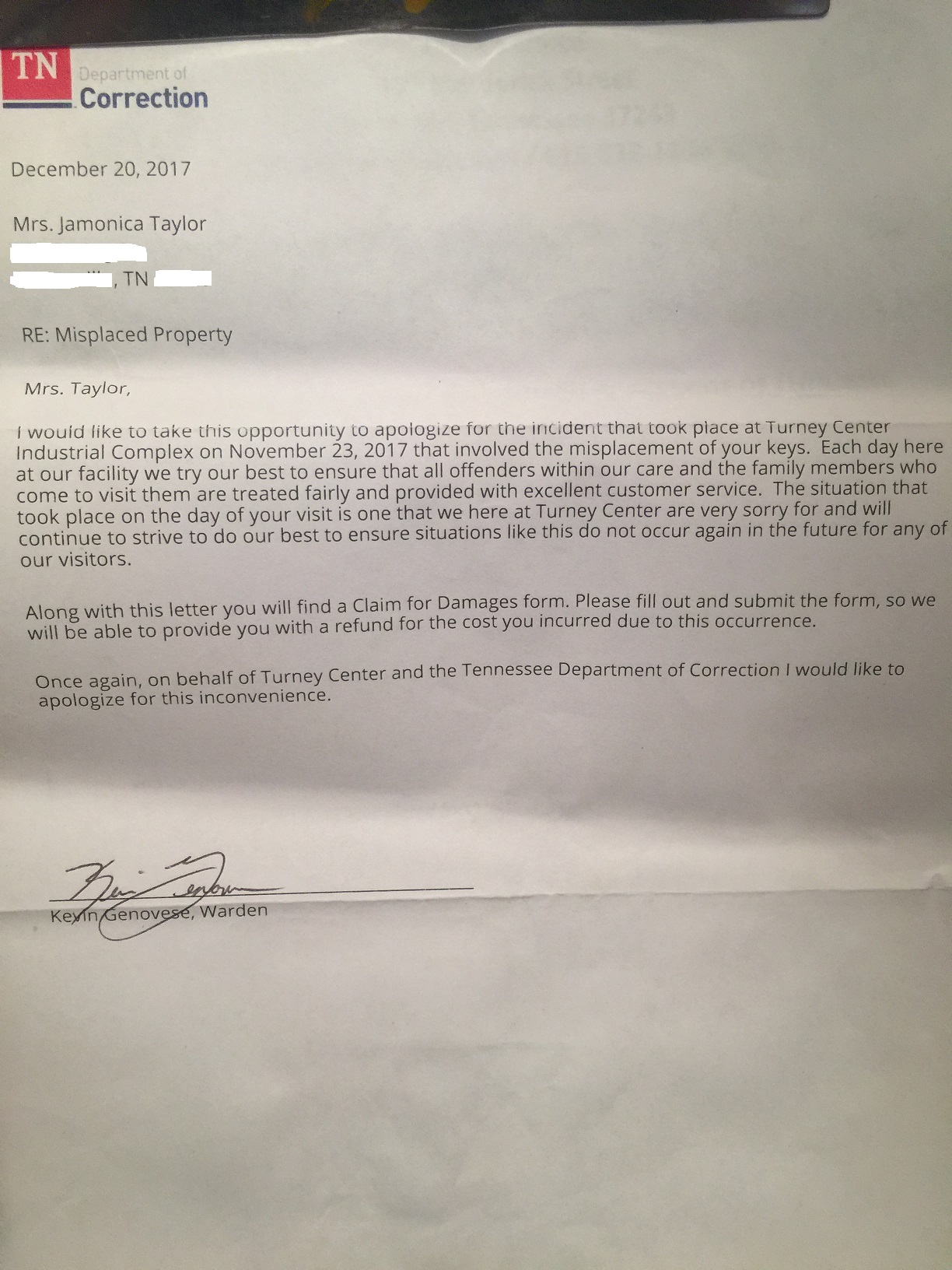 Taylor completed the form, enclosed copies of her receipts, and sent them to the Tennessee Treasury Department, Division of Claims Administration.  She was told that she should receive a response by the end of March.

On Thursday, Taylor informed The Post & Email that the day before, she received a letter denying her claim (pictured below) signed by Claims Examiner Andrew Ellis.  In a phone call on Thursday morning, Taylor said that Ellis informed her that TCIX staff had “found my keys.”

Taylor countered with the absence of evidence to support Ellis’s assertion.  “If they found my keys, then where are they?” she asked rhetorically.  “Y’all had to have proof,” she said she told Ellis, as well as that she intended to recontact this publication about the Division of Claims Administration’s refusal to reimburse her.

“They claim that I always leave my keys up front, but that’s not true,” she added.  She speculated that Ellis was attempting to “cover up” for the negligence of TCIX staff and the expenses she subsequently incurred totaling more than $1,300. 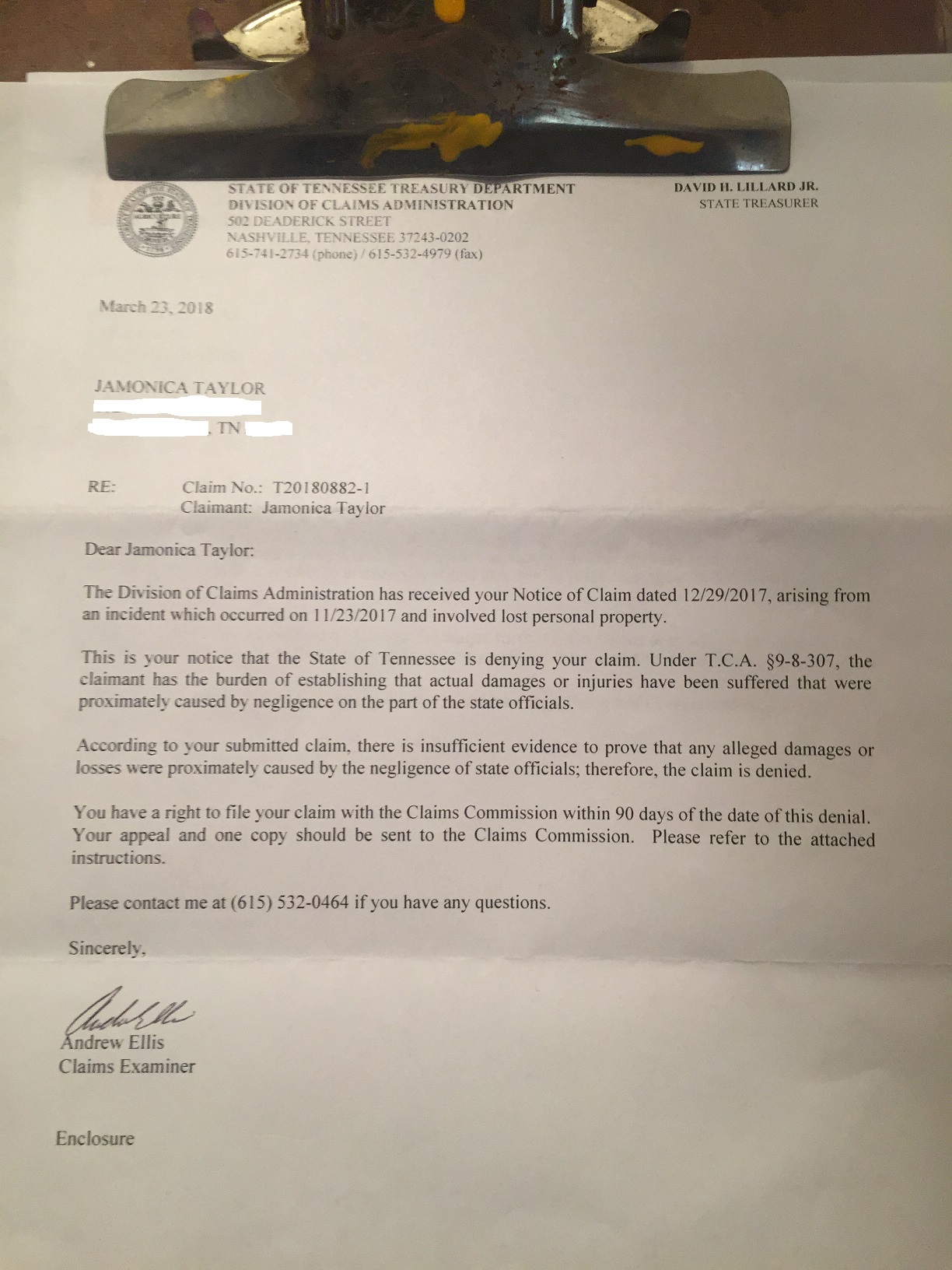 Taylor said that Ellis also attempted to make the case that her keys were “her responsibility” despite the fact that they were taken out of her custody while she visited the inmate.

In an interesting development, Taylor reported that approximately two weeks after her Thanksgiving Day visit, the inmate she had visited was relocated to the prison where he had requested to go for some time, which also happens to be an hour closer to her place of residence than TCIX.  “They automatically shipped him to another prison, just out of the blue,” Taylor told us.

“He’s been trying to get closer to us but they kept denying him,” she said.  “Look what we had to go through.  I think they thought I was going to drop the issue of the keys once they moved him.”

Taylor said that even though the incident caused her to lose time from work, she did not include her lost pay in her claim.  She is appealing the denial to the Claims Commission as suggested in Ellis’s letter, using the three-page form he enclosed.

A single mother, Taylor told us that she used her children’s “Christmas money” to retrieve her car from the TCIX parking area, have it towed to her home and then a Toyota repair shop to have a new key made.  When we asked what she and her children did for Christmas, she responded, “I had to go and take a loan out.  Thank God my kids got what they wanted for Christmas.  They won’t forget that they had to sit out in the cold because their mama didn’t have her keys.”

When we asked if she has visited the inmate since he was relocated, she said, “Yes, I go faithfully, and there’s been no problem.  I have the exact same 98-cent key ring as I did before, and they let me take it to the back.  They have no problem with it.”

Ms. Taylor is seeking “affordable” legal assistance in recovering her expenses from the State of Tennessee.