“MANY OF THESE PEOPLE ARE STILL IN OUR GOVERNMENT” 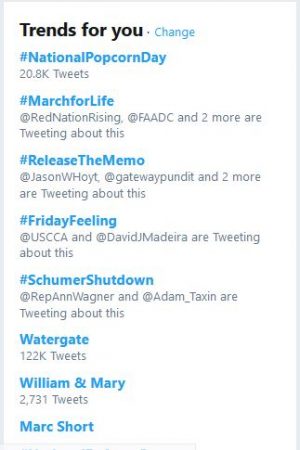 (Jan. 19, 2018) — As a result of the announcement  on Thursday night’s “Hannity” that some members of Congress have read a four-page classified memo apparently containing “widespread” evidence of abuse of laws governing the use of the Foreign Intelligence Surveillance Act (FISA) on the part of DOJ and FBI employees, the topic “#ReleaseTheMemo” is trending in third place on Twitter as of this writing.

On Thursday Hannity hosted investigative reporter Sara Carter and Rep. Jim Jordan to speak about the “weaponizing” of the tools of the U.S. intelligence community as reflected in the classified memo.

“Those tools were used against an opposition candidate and a president-elect and his entire team,” Hannity said, along with “the help of Hillary Clinton,” referring to the commissioning of FusionGPS to obtain the now-infamous “Trump dossier.”

Hannity said that close to 10,000 “texts” still not released between FBI Special Agent Peter Strzok and his paramour, FBI attorney Lisa Page coincided with the DOJ’s obtaining of a warrant to “spy on the Trump campaign” with permission, albeit obtained under false pretenses, from the FISA court.

The warrant was obtained against then-Trump informal adviser Carter Page by use of the Trump dossier, which contains unverified claims that Russia was attempting to help Trump win the election.

Hannity said that the Mueller investigation into Russian “collusion” and alleged interference in the 2016 election should be disbanded and that Strzok, Page and FBI Deputy Director Andrew McCabe worked to try to prevent Trump from winning.

“This is far worse than Watergate…It was all done by just a few people who think and thought they knew better than you about who should be the president of the United States,” Hannity said.

On Twitter on Friday, Rep. Mark Meadows called the information in the memo “absolutely shocking,” while Rep. Matthew Gaetz on Friday’s “America’s Newsroom” said that “Our republic is in jeopardy if we allow this type of a ‘palace coup’ environment to continue to persist.”  Gaetz said he will be urging House Intel Committee Chairman Devin Nunes to release the memo to the public in the very near future.

Gaetz suggested that the committee should vote, followed by the entire House of Representatives, then a courtesy check with the executive branch be done before releasing the memo publicly.

“I don’t think it’s appropriate for just members of Congress to be horrified by the activities that were undertaken during this endeavor, and that’s why we’ve got to allow the American people to see it…If we get this memo into the public square, heads are going to roll at the FBI and at the Department of Justice…” Gaetz told host Bill Hemmer.

Without elaborating on the classified contents of the document, Gaetz said that “laws were broken” and that some of the alleged perpetrators “are still in our government.”

In an interview on Bill Martinez Live! on Thursday, Obama birth certificate forgery investigator suggested that if the “Deep State” were capable under Barack Obama of spying on opposition candidates and private individuals with impunity, it is not out of the realm of possibility that Obama sympathizers within the “Deep State” created a fraudulent birth certificate and Selective Service registration form bearing his name.