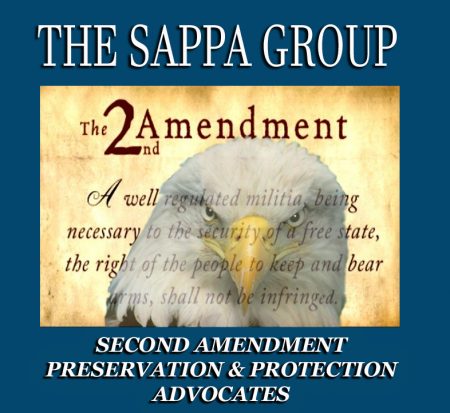 (Jul. 18, 2017) — As many of you know, TPATH and the SAPPA Group have been working with Nicholas E. Purpura for just over two years on a Federal Legal action which is challenging the unconstitutional laws which have been enacted and enforced here in New Jersey.

The following report and information, while it is as important as anything TPATH has worked on or covered since the early days of that un-american, non-eligible, Muslim-in-chief, BHO faux-president’s eight-year attack on our country, the difficulty here is trying to make a very statistical and data-filled article interesting enough to keep everyone reading.

AND WE NEED EVERYONE TO KEEP READING!

Since the very first steps we took, which were, among other things, the notification of several politicians, judges and lawmakers that they have been party to and instigators of civil rights violations as covered under the federal RICO Act, right up to and through to this very important day in which we have petitioned the U.S. Supreme Court, our work has been time-consuming and non-stop.

From the outset we were told that this legal action had no future. As this effort, inspired by Mr. Purpura, researched, editorialized, made trips to Trenton, paid fees piled upon fees, avoided obstacles, new and old, which which have been laid in his path, he continued on. Professional law groups warned us of the futility, the NRA and other organizations refused to join this effort, naysayers on Facebook and national gun forums gave us a shorter survival period than a DNC hacker.

Here we are, standing on the apex of the impossible. A height, by all rights and history, we should not have been able to scale. Nicholas, a non-attorney, outwitted, out-researched and outlasted unscrupulous politicians, legal departments, federal court clerks and judges. He anticipated their every move and had responses prepared for each sneaky maneuver they tried.

On several occasions the thinking heads prepared what they knew would end the case, then in the spirit of procrastination provided 30 days or more to respond. Mr. Purpura filed a response not in a month or weeks but had his response into the system in a matter of days, not hastily-prepared responses but carefully done ahead of time as they never failed to operate predictably.

During these unsuccessful endeavors by the federal courts, the defendants and their attorneys, one after the other anticipating the end of this lawsuit, the body count grew. Not on Nick’s team, but theirs. State attorneys were removed, others were demoted and new, more powerful minds replaced them. In fact, even a federal judge was removed. On the federal side, they, too, had no ability to dump this case. My goodness, though, they tried.

WHERE DO WE STAND?

This petition survived political pressure, outlandish fees, hidden court orders, violations of federal law by the defense, the total abeyance of legal precedent by both lower federal courts, underhanded dirty tricks, and intentional protraction which were clearly meant to drain Mr. Purpura’s finances and spirit. While they did succeed to some extent with the former, the latter is more engaged than ever.

The District Court, the place where we first filed the Petition, failed for over 18 months to rule on the merits of the lawsuit. That, of course, was because they are ideologues and have been placed in their positions not to protect the liberties of the people or the viability of our Constitution but they are there to protect and defend socialist control over the masses.

Understanding the powerful documents that lay before them, they did what they had to do, that being nothing. With the pressure mounting, Judge Shipp finally took the proverbial low road and ordered Mr. Purpura to resubmit his original Brief. The grounds for this? It seems that after a year and a half, this judge, no doubt brainstorming and in collusion with the Defense, declared that the non-attorney’s Brief was too detailed and complicated.

After several unpleasant encounters with the next level federal court, the 3rd Circuit, they reluctantly admitted that they were not just jurisdictionally able to hear the appeal but were required to. Surprisingly enough, okay, not so surprising, the Appeals Court also refused to rule on the merits and used language similar to and as vacuous as that of the lower court. Next stop, The United States Supreme Court.

WHY WE NEED EVERYONE NOW

Nick Purpura reminds us that for each session of SCOTUS it receives many thousands of appeal requests. Only those which have had enough notoriety and attention in the media or have powerful people behind them will ever get docketed. Court clerks, some of whom work for the lefties and some for the conservative justices, scan through the piled-high Writs. If a left-leaning clerk gets in his review stack our Writ, it will get buried quicker than a 1780’s smallpox victim.

There is, however, another step that can be taken. It is quite expensive and requires a good journalistic effort to summarize and encapsulate the past proceedings and get that information into just a few pages. Those pages form the Motion to Expedite. These documents will then be delivered to the offices of all nine justices. This will ensure that these years of work do not fall solely upon the eyes of a leftist jerk. I mean, clerk.

Patriots, this update can now inform you that that step has been taken. Yes, the Appeal Writ has been prepared, edited and delivered to the Supreme Court, as has the Motion to Expedite which has, as of this day, been placed in the mailboxes of all nine justices.

The next steps are those that need to be taken by the people. Patriots who have, at least until now, felt powerless in the face of the powerful, now can join this battle, employ a little power of their own. They can man the front lines and get involved in a way that will seriously help win this case.

While Mr. Purpura could surely use some financial help, and you could use this link to do that, what we need most is publicity. We need people to call radio stations and even C-Span and bring up this lawsuit. We need you to contact the NRA and other so-called gun rights groups and ask them why they have ignored this legal action. We need you to write letters to the editors of newspapers and magazines and hopefully get some of them printed.

We have created a form letter which anyone can use, edit or alter in any way they wish and send it to their sport or gun organizations. Download it here. In short, we need this information out in the public. It needs to get out before the October session.

Finally, if we can raise some funds we will pay for cable TV ads, radio and newspaper spots. There is one other thing we need to do. Create YouTube, Facebook and Twitter videos about this. Who knows, maybe one of you can create one that will go viral.

Read and/or download the Motion to Expedite and the Appeals Writ from the SAPPA pages of TPATH.

A final note: This may be the last chance the citizens of New Jersey and other states so situated will have to unburden ourselves from the ideologues who will never stop dismantling our freedoms without being FORCED TO.