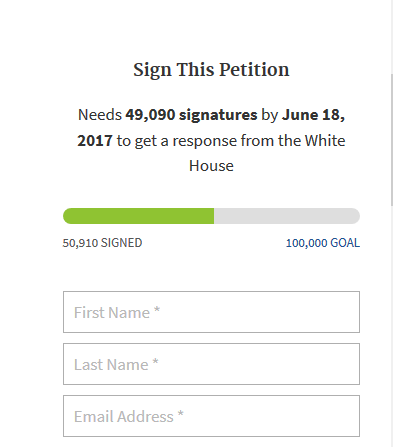 (Jun. 6, 2017) — A petition posted at whitehouse.gov on May 19 urging the White House to appoint a special prosecutor to investigate the death of a DNC staffer last year has surpassed the halfway point at 50,910 signatures as of press time.

All petitions posted on the White House’s official website require 100,000 signatures within a 30-day period in order for the administration to provide an official response.

In the early morning hours of July 10, 2016, two-year DNC staffer Seth Rich was shot as he walked home from a night out with friends at a local bar. He was reportedly speaking with his girlfriend on the phone when an unnamed assailant or assailants shot him twice in what the DC Metropolitan Police have reportedly said was a “botched robbery.”

As no valuables were taken from Rich’s person, many have questioned the accuracy of that early determination.

On May 20, Internet entrepreneur Kim Dotcom tweeted that he has evidence showing that Rich had been in email communication with WikiLeaks, an organization founded almost 11 years ago which publishes secret government documents from around the world.

Beginning on July 22, WikiLeaks began releasing batches of what came to over 44,000 emails from the DNC’s servers showing that party leadership worked to assure Hillary Clinton the Democrat presidential nomination in violation of its public statement of neutrality in the primaries.  As a result, three officials were forced to resign along with chairman Debbie Wasserman Schultz.

The unsolved murder case was revived on May 15, when a DC Fox affiliate broadcast an interview with private investigator Rod Wheeler, who was conducting a parallel investigation for the family and said he had located evidence that Rich had communicated with WikiLeaks through his computer.

In subsequent interviews, Wheeler restated his original claim to say that he had not personally seen such evidence but had acquired the information from a federal investigator who had imparted it to a Fox News Channel reporter.  The mainstream media then attacked Wheeler’s credibility, after which Wheeler, a Fox News contributor, went quiet.

The Rich family reportedly dismissed Wheeler shortly thereafter.  A “progressive” family spokesman, Brad Bauman, has insisted that Rich was not in touch with Wikileaks, even to the point of displaying anger and disconnecting from an interview with WND.

Various rewards for information offered by WikiLeaks and a number of private parties now total more than $250,000, but no one has yet come forward.

Last week, a lawsuit was filed by lobbyist and attorney Jack Burkman against the DC Metro Police for allegedly failing to respond to a number of FOIA requests pertaining to the investigation.

After Fox News Channel’s Sean Hannity began reporting on the case on May 16, the mainstream media launched a boycott of his advertisers which, although partly successful, has been quiet of late. A new media initiative by Brian Maloney and Melanie Morgan seeks to expose the advertisers of those organizations which targeted Hannity.

As with the issue of a birth certificate forgery connected to Barack Hussein Obama, the mainstream media labeled the idea that Rich was in touch with WikiLeaks a “conspiracy theory” without offering evidence as to why.

Dotcom has said that he “knows” that Rich is connected to the DNC email release, which some believe was partly responsible for Clinton’s loss to Donald Trump in November.

The petition can be signed here:  https://petitions.whitehouse.gov/petition/appoint-special-prosecutor-investigate-murder-seth-rich-alleged-wikileaks-email-leaker