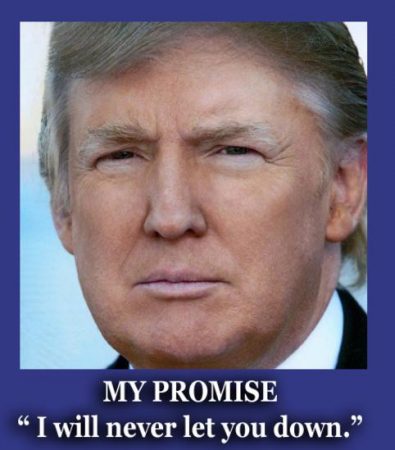 (Mar. 29, 2017) — These past few weeks have stirred much consternation among so many of the irredeemable and deplorable Trump supporters.  There has been anger and even some vitriol splashed across the realm of social media. TPATH is not concerned in the least with the MSM or for that matter, the Democratic leadership.  In fact the more they melt down in utter foolishness, lies and outrageous shenanigans the better we feel about where this country is finally headed.

But what is a concern is how many on our side who, all of a sudden, have decided that they know more about “the deal” and more about how to bring about success than does President Donald Trump.  This is in reference to the so-called health care debacle or failure.  His devotees, and very rightfully so, have from the beginning believed that Trump is a master of the deal and that he can be trusted to do the things he has promised.  Then why have so many, like my good and dear friend Phil, begun to lose faith? Why do they suppose, even before the first huge deal is done, that Trump is falling short on his promises?

Honestly and realistically no one on the outside of his inner circle knows what has transpired or why.  They don’t know if this is Trump spiraling out of control or if Trump is controlling the spiral.  My bet is on the latter.

First we see that impish RINO Ryan putting forth a bill that is not much better than Obamacare.  We all know why?  He is one of the many swamp-dwellers in the pockets of special interests.  He no doubt has been paid and paid handsomely to keep profitable provisions, for his lobbyists, in the bill.   If we know this, is it unfathomable that Trump does not?

Conversely, the Freedom Caucus is made up of good, solid and truly conservative political people.  They clearly want an efficacious and less intrusive bill.  However, since these guys are politicians, they know what politicians do.  They all have been lied to, misled and cheated by leadership.  So they have refused to believe that Trump will fix the dirty deeds the RINO Caucus has put in the bill.  They do not know Trump like we do or like they should.  Experience and history tell them not to believe political promises.   We all see this; is it possible that Trump does not?

Knowing no more than most people out there, our perception is that Trump had many meetings with the Freedom Caucus where he promised them he would fix what needed fixing before this thing became law.   Some of them may have indicated to Trump that they would consider accepting his promises.  But in the end, enough of them just couldn’t bring themselves to go against their experience and decided not to support any bill with writing in it they could not abide.

Surprise to Trump or not, either way it most likely opened the next strategic avenue. Vilifying the Freedom Caucus (FC) while seeming to support Ryan’s bill put the pressure on Ryan to come up with a better bill when next they tackle this.  Keeping Ryan in the game and apparently on the team, he is now more likely to come up with something much better and that will need less tweaking in the Senate.

Understanding this strategy we need to look at what Trump actually has said. The Ryan bill is good, they worked hard on it, and things will be done to make it better.  Also, despite his manufactured anger at the FC, we must note that he has not said that he disagrees with the substance of their argument, only that they have not been responsive to his promises.   That is a very important distinction.  Why is he doing this?  Well, if you have not read his book, “The Art of the Deal,” you should.  He is following his tried-and-true practice of keeping both sides, not just guessing, but in the game. At the same time he is offering a lifeline to both parties.  He could have gone to either side and shown tacit support but he chose to side with RINO Ryan.

Again, if you read Trump’s book you will see why he did this.  Ryan is like the little, spoiled-brat, rich kid most of us have had to deal with growing up.  His house has the swimming pool, the tennis court and the basketball hoop.  If you wanted to swim on a hot August day or shoot some baskets on a cool evening you put up with the obnoxious rich kid.

RINO Ryan has the basketball court.  There will be no matches unless he issues invitations.  The Freedom Caucus, regardless of the conservative positions they support, has no facility and no means to generate a game.  So who must the organizer of an event deal with? The kid down the street who has only a worn-out raggedy old ball to offer?  Not likely. However, once the competition has begun the rich kid will seldom receive a bounce pass in the paint.  And so it will be.  Count on it.

So to all our friends who have been on the Trump Train from the beginning and also to those who were barely able to cling to the side railing of the caboose as it left the station, we say this.  We have stood strong with our man and swore to anyone who would listen that he will and can do what he has promised.  What we need to do is stay on that train, hang onto that railing while Trump does his thing.  Do not listen to his enemies. His enemies are our enemies.

Until and unless he actually fails to provide a promise, until and unless he signs a bill that is not consistent with our values and expectations, let us all keep the faith.  Let him manipulate who and what needs manipulating, without second-guessing his tactics.  There will be plenty of time to drag him off to the woodshed if he proves to be no different than those he has promised to drain from the swamp.  I, for one, do not think that day will ever come.