(Jan. 30, 2017) — Hundreds of thousands of travelers enter the United States every day, and out of 193 nations in the world, on Sunday, 325,000 passengers traveled to the US, and only 109 travelers from 7 terrorist-sponsoring countries were detained in compliance with President Trump’s Executive Orders.  The Executive Orders imposed a 120-day moratorium on refugee resettlement and a 30-day ban on those entering on visas from 7 terrorist-sponsoring countries.  Of the 109 detainees, fewer than a dozen were restricted from staying in the United States.

The below-listed article discusses the lawsuit filed against the Trump administration’s “Terrorist Ban.”  It lists five organizations that are plaintiffs in the lawsuit.  The International Refugee Assistance Project, The Jerome N. Frank Legal Services Organization at Yale Law School, The American Civil Liberties Union (ACLU), The International Refugee Assistance Project, and The Open Society Foundation are listed as plaintiffs in the lawsuit; they have all received generous donations from the former “Nazi,” George Soros (Google his background).

The 6th and the 7th organizations that have been working very closely with George Soros’s “Open Borders” policy and are very much involved in the lawsuit are the Muslim Brotherhood (MB) and the Communist Party, USA.  The MB is the prime mover behind organizing demonstrations across the nation against President Donald J. Trump’s Inauguration on January 20th and 21st and his Executive Orders temporary halting the Immigration of travelers from the above-listed nations.  The MB fears that the Trump administration may outlaw and ban it and its front groups as Egypt, Saudi Arabia, Syria, Bahrain, the United Arab Emirates, and Russia did when they designated the MB and its front organizations as international terrorist organizations.  Israel, Canada, and the United Kingdom have announced that they are also close to designating the MB as an international terrorist organization.

The MB front groups, such as the Council on American-Islamic Relations (CAIR), Islamic Society of North America (ISNA), Muslim American Society (MAS), Muslim Student Association Chapters (MSA), and the Holy Land Foundation (HLF), have thousands of members operating in the United States and the UN, controlling the UN Muslim Refugee Resettlement Program which has brought in over 900,000 Muslim refugees from the Middle East and Africa over the last 8 years.

MSA is a college student organization founded by the Muslim Brotherhood in 1963 at the University of Illinois.  In the early 1980’s, the MB also created the Islamic Society of North America (ISNA) in order for it to be the “nucleus” of the Islamic Movement on the North American continent.  It was formed by many of the leaders who created the MSA and is in fact an outgrowth of the MSA.  ISNA has become the umbrella organization for all MB front organizations created by the MB in America.

In 1980, when ISNA was created in the US by the MB, it then created over 100 organizations to help accomplish MB’s stated mission, the “Civilization of Jihad.”  In 1992, the Muslim Brotherhood Strategic Plan (MBSP) was published whose goal is to create thousands of Islamic organizations in accordance with the MB Implementation Manual. The MB then created many new Islamic Societies, 2200 Islamic centers and mosques, 160 organizations (social organizations, media organizations, legal foundations, medical clinics, and trade associations), 700 Muslim Student Associations (MSA) on every major college and university campus, and other organizations across the US.

CAIR, MAS, and ISNA were named as unindicted co-conspirators, along with 300 others, in the HLF federal terrorist case.  Federal prosecutors explicitly named CAIR, MAS, and ISNA as Muslim Brotherhood entities in the trial.   Yet for 8 years Obama, with the help of the left-of-center liberal media establishment, the MB and MB front groups covered up the convictions.

Since 2001, the number of Islamic operational centers has dramatically increased to over 4000 locations, and Obama brought in over 900,000 Middle East and African Muslim Refugees to the U.S. to populate, support, and operate those MB network and operational centers/locations.  The goal of establishing over 4,000 locations including Islamic centers, trade associations, medical centers, etc., and populating them with Middle Easters and  African Muslim refugees was to fulfill the MB’s stated “American Mission” (posted on the MB International website), which is to accomplish “Civilization Jihad.”

“Civilization Jihad” is the method outlined by the Muslim Brotherhood in its mission statement intended to replace the law of an elected government with a government run by “Sharia (Islamic) Law” as the law of the land.  In the US, the MB’s goal of  “Civilization Jihad” is to destroy the US government from within by replacing the US Constitution with “Sharia Law” (it’s the same goal Communists had when they tried to take down the US government from within in the mid-1940s and 1950s).

The plan of the HLF to replace US Law with Sharia Law was proved in US federal court by the US Department of Justice; the trial resulted in the conviction of HLF in 2008.  Members of the MB and their front groups have been placed by the Obama administration in thousands of highly-sensitive government positions, many more sensitive positions than the Communist Party once filled when it infiltrated the US government in the mid-1940s and 1950s; their intent was to take over the US government from within.

Every year for 8 years, the MB and its front groups at the UN prevented over 300,000 Syrian and Assyrian Christians fleeing from ISIS’s brutal and bloody genocide in the Middle East being housed by the Greek Catholic Relief Agency from being approved for resettlement in the US; the UN Refugee Resettlement Program is run by member nations sympathetic to the MB.  For the last 8 years, the Obama administration supported the UN boycott of those Middle East Christians, preventing them from entering the US.

Following each of the 94 “radical Islamic terrorist” attacks on Americans in the US, the MB and its front groups mounted a massive “politically-correct” and dishonest public relations response to each murderous attack against Americans in the US, denying and deflecting any linkage of those terrorist attacks to Islam even though the perpetrators often sent messages on social media that they supported one of the following—ISIS, Al Qaeda, Jihad, Salafists, the Taliban, etc.  The left-of-center liberal media establishment worked very closely with the Obama administration for 8 years to cover up each radical Islamic terror attack; very few Americans are aware that there have been 94 such attacks in the United States.

For the last 8 years, any reference to Islam deemed offensive to Muslims and history of past attacks was removed from training manuals, classroom instructions, reference material, and historic data maintained by the FBI, the CIA, DHS, DOD, State, the Justice Department, the Border Patrol, Customs & Border Protection, the Army, the Navy, the Marine Corps, the Air Force, the Coast Guard, NSA, 17 Intelligence Agencies, etc.

The MB’s plan to replace the law of the United States with Sharia Law is outlined in “Understanding The Threat” by its author, former FBI Special Agent John Guandolo, a US Naval Academy graduate in the Class of 1989.  SA Guandolo served with distinction as a commissioned officer in the US Marine Corps and his website can be viewed at http://www.UnderstandingtheThreat.com.  “Civilization Jihad” has been outlined in many published articles, and videos such as “They Must Be Stopped” by Brigitte Gabriel, books, and in many radio and TV interviews about the Muslim Brotherhood.  Information on “Civilization Jihad” can be easily found in many of the Muslim Brotherhood writings, on their international websites, and on other Islamic sites. 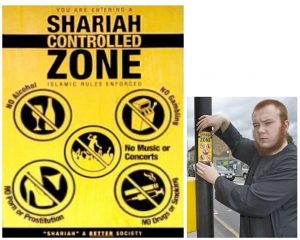 Americans who don’t consider the MB and their front groups a threat should look at how Sharia Law has been destabilizing the countries of the European Union including England, France, Germany, etc.  Just prior to the inauguration of President Trump, the Obama administration encouraged hundreds of members of the MB and MB front groups which they politically appointed to convert their politically-appointed positions into permanent Civil Service positions.

The members of the Muslim Brotherhood and its front groups must be required to swear allegiance to the US Constitution and the US government instead of swearing allegiance to Sharia Law.  As Obama was leaving office, he supported the election of Cong. Keith Ellison (D-MN-5), a strong supporter of the Muslim Brotherhood, the Nation of Islam, and the Communist Party USA, to be Chairman of the Democratic National Committee.  We will soon present the detailed background on Ellison and his long-time ties with the Communist Party.