MOVE WOULD FOLLOW THAT OF GEORGE W. BUSH, RONALD REAGAN 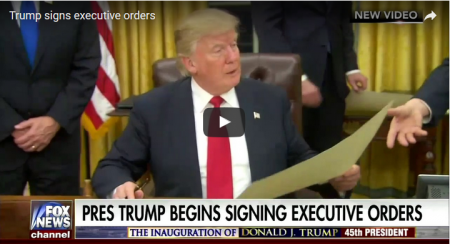 (Jan. 20, 2017) — The New York Daily News and other sources are reporting that on Sunday, President Trump will likely reactivate a ban on federal funds flowing to overseas organizations which promote or provide abortions.

Sunday is the 44rd anniversary of the U.S. Supreme Court decision, Roe v. Wade, which ruled that a Texas law preventing a woman from seeking an abortion was unconstitutional.

Like other Supreme Court decisions, it was then applied to the entire country, which in effect “legalized” the process of ending the life of a fetus.

During the Obama years, a number of states enacted legislation limiting abortions after 20 weeks of gestation, when it is believed the fetus can feel pain.

Obama had reversed President George W. Bush’s ban on U.S. funds in 2009 which was originally put in place by President Ronald Reagan in 1984.

Since Roe v. Wade, the annual March for Life takes place in Washington on January 22.  This year’s will be on January 27, and Trump’s former campaign manager, Kellyanne Conway, will be a speaker.

According to media reports on Friday evening, since his swearing-in on Friday just before noon, Trump has already signed at least two executive orders and officially submitted his list of cabinet nominees to the U.S. Senate for confirmation hearings.