WIDOW OF KIA CIVILIAN CONTRACTOR:  “WHAT I UNCOVERED DURING MY QUEST FOR THE TRUTH ABOUT MY HUSBAND’S DEATH IS UNBELIEVABLE” 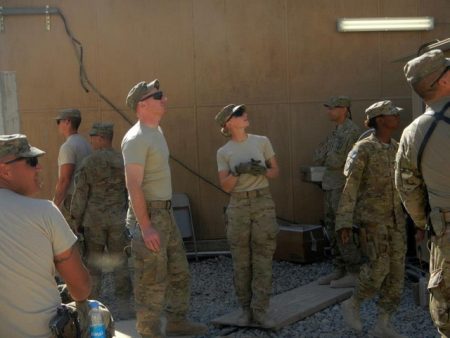 (Jan. 3, 2017) — In an interview last month, the widow of the late civilian contractor Thomas J. Boyle, Jr., Pauline Boyle, told The Post & Email that in what she has described as a far-reaching “cover-up” of the cause of her husband’s death by the U.S. military, “there are no ‘good’ guys.”  She believes that the high degree of negligence and lack of training exhibited by the 303rd Army Reserve Unit directly led to her husband’s death.

“Our military reservists are a joke,” Mrs. Boyle has stated based upon statements and other documentation shared with her not only by enlisted soldiers but also by those on base the day of the attack.

Over more than four years, Mrs. Boyle has been relentless in her quest for the truth, which began on June 19, 2012, the day her husband was killed at Forward Operating Base (FOB), Kandahar Province, Afghanistan.

She has previously described how a number of insurance companies from whom her husband purchased life insurance have refused to pay benefits which would have been expected in the event of his death. Mrs. Boyle is certain that her husband died as a result of gross negligence on the part of soldiers in the 303rd Military Intelligence Battalion out of Jackson, MI, a Reservist Unit of the U.S. Army.

She believes that the insurers have been instructed by her husband’s former employer, Engility/L-3 Communications, to refuse payments to her so as to obscure the fact that Mr. Boyle’s death was “accidental” and not the result of the insurgent attack which occurred on the base that day.   “Not surprising is the fact that the employer, L-3/EngilityCorp., received payouts on my husband’s death – policies commonly referred to as ‘dead peasant’ policies or ‘janitor’ policies,” Mrs. Boyle told us.

A decorated Vietnam War Marine and retired Chicago police officer, Mr. Boyle was restless in retirement and sought to “make a difference” in troubled areas of the world, where he taught intelligence-gathering skills to nascent police units in a postwar era.

Mrs. Boyle has engaged in extensive contact with the Army and other military branches seeking documentation as to exactly what happened to her husband that day.  She has compared his husband’s death to that of former Arizona Cardinals football player Pat Tillman, who was finally declared by the Army to have been killed by “friendly fire” in 2004 after a different explanation was first offered.

Of the deficiencies within the 303rd, Mrs. Boyle identified “fraternization” between one female soldier in particular and a number of men in the unit, an issue so problematic that it was reported to upper command, according to reports provided to Mrs. Boyle.

A sergeant present during the terrorist attack on FOB Kandahar on June 19, 2012 but not part of the 303rd later shared some of his observations about one of the females on the base at the time with Mrs. Boyle:

“Several reservists on base that day justified their lack of truthfulness by stating, ‘I only joined to get my college tuition paid,'” Mrs. Boyle said.

“The mention of tuition was made directly to me by a reservist present that day and wounded when I asked him to relate the truth of my husband’s death,” Mrs. Boyle said. “Isn’t it a sad state of affairs when you can justify not doing the right thing when it involves someone’s death? That their tuition is more important than a life? They’re unable to distinguish right from wrong anymore.”

Enlisted men from another base told me privately that one time they were going over stations and battle plans with one another in the event they came under attack.  He explained how the 303rd would kick soccer balls at them to disrupt the discussion.  He confided that most became angry with how little regard the 303rd gave to the seriousness of the situation.  This was all a joke to them.  It was the time of the Arab Spring and many bases came under attack – insider attack.  And the 303rd stationed at Provincial Reserve thought their deployment to be a vacation of sorts.

Other soldiers told of how the 303rd refused to train. Again, the fraternization of the problematic female was really an issue from what I was told.  This very same female – who may have weighed about 100 pounds — also had access and carried a SAW (semi-automatic weapon), which was too much of a weapon for her to control.  How she was cleared to operate this weapon is unknown.  On full auto many males cannot control a SAW.  Nevertheless, this female had access to a SAW.

Also confided to Mrs. Boyle was the fact that many of the wounded on the day the base came under attack were wounded by 5.56 bullets.  “The insurgents were firing AK’s, which use 7.76 rounds.  Clearly someone on the U.S. side of the base lost control of his or her weapon during the attack or impending attack.  Perhaps more than one reservist lost control of his weapon.  It always amazed me how four insurgents did that much damage,” Mrs. Boyle told us.

Other issues which Mrs. Boyle said were confided to her include, in her words:

– Those who hid during the attack

– How one “guardian angel” stationed on the roof at the time of the attack just lay there as it ensued.   He did not respond in any way.

– Others mentioned seeing one soldier fall backwards with his SAW on full auto.  Later this soldier admitted it had happened.  His position was across from the tent where interpreter Farhad had died of a bullet wound in the back and also next to the tent that housed sleeping U.S. soldiers, many of whom were wounded in their tents during the attack.

– When speaking directly with some of those on base, they intentionally misdirected or falsified information.  Most important is the position of my husband’s body where he supposedly died.

– Another reservist officer confided that during stateside monthly weekend training he felt his job to be relegated to keeping reservists from stealing “anything that wasn’t nailed down including weapons and ammunition.”

– This very same officer gave a brutal but honest statement – he told me that he has never met a female in the Army that would not ‘sleep for rank.’ Let that sink in for a moment.

As mentioned previously, Mrs. Boyle obtained crime scene photos from a source which depict her husband’s body in an area without a drop of blood surrounding him.  “How does someone get shot over 11 times from two different areas (chest and side) and there is no blood anywhere near his body?  Why is there a soldier smiling in the very same photo next to my husband’s body?” she commented.

[Editor’s Note:  The Post & Email has seen the referenced photo but chooses not to present it here.]

When I started asking pointed questions they knew would incriminate the 303rd a different tactic became evident.  It comes around to where they made me the evil one.  That unit demonized me for wanting to know how my husband died.  In their minds, they could say they were ordered to remain quiet; I don’t think it was their idea to launch the cover-up initially.  I believe it was the Lt. Col. on base that day who instigated it; he was in contact with his superiors because they all knew that if the truth got out about the fratricide, their careers were sunk.  So I believe the Lt. Col. devised the plot, and the others were ordered to go along with it.  The two Reservists who “accidentally” shot my husband were more than happy to go along with the deception.  It saved their reputations, or so they think.  These two then convinced the others to go along with the lies. They even moved my husband’s body to stage a scenario to fit their new agenda – the false agenda.

The games played by this unit would have been almost laughable if they did not involve my husband’s death. Soon after she was stateside, the problematic female Reservist contacted me anonymously and suggested that in order for her to tell the truth, a subpoena would need to be issued.  So you need a subpoena to tell the truth?

I am quite sure this female soldier would have changed her tune if she were to be subpoenaed.  You have to remember that each and every one of those on base are guilty of insurance fraud by covering up the death of my husband.  And insurance fraud is a felony.

I found out quickly how attorneys were willing to financially break the families of the deceased.  They might offer to take the case on the basis of charging the client only for expenses.  However, these expenses are exaggerated greatly – the firm loses the case as is prearranged with the insurance companies and the families are stuck with hundreds of thousands of dollars in expense fees. But what they really do is break the family of the deceased financially.  One family in California lost their home in order to pay these expenses.

Honor and integrity was not the goal of the 303rd Army Reserve unit.  Their goal was to get a small pension, a little bit of salary, and have their college paid for by any means possible.  They cared little for the man who was murdered, a man they thought was unimportant.  The arrogance of youth.

Which makes me wonder:  Are women really qualified to serve in combat situations?  Or is their presence nothing but a distraction?  Is there a necessity for the Reserves within the military as it exists now? Or should Reserve units be restricted to soldiers who have already served?

You know those former enlisted men who know the meaning of duty, honor, and family.

The Question of Reserve Units in the Military and Necessity of Females in Combat Situations added on Tuesday, January 3, 2017