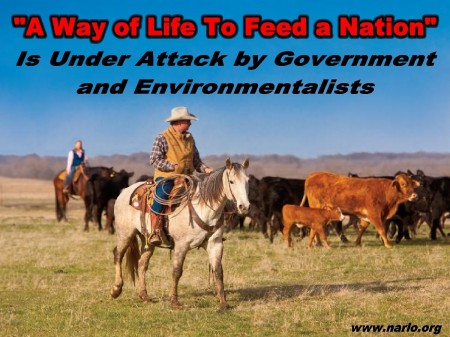 (Nov. 20, 2016) — Most Americans are totally unaware of the battle raging in the West between landowners and the government and the environmentalists, especially those Americans who live in big cities.  Their food arrives at the grocery store by truck and neatly stacked on the shelves from which they are able to make their individual selections.  What happens before the trucks and the grocery store is of no interest to them.

The Bundy ranch showdown with the Bureau of Land Management (BLM) in Nevada in April of 2014 and the takeover of the Wildlife Preserve in Oregon earlier this year were triggered by federal bureaucracy abuse and harassment.  Rabid environmentalists have taken over the federal Interior Department, the Environmental Protection Agency, the Department of Agriculture, U. S. Fish and Wildlife, the Bureau of Land Management, the National Forest Service and the National Park Service.  Each department is headed up and staffed by a cult-like culture of radical environmentalism.   All land use legislation is infected with this culture of “protect the environment at any cost,” where the cost turns out to be an attack on farming, ranching and constitutionally-protected property rights.   We’re not against protecting the environment.  We are against trashing the Constitution to do it.

Radical environmentalism has been institutionalized in our public schools and colleges.  The graduates from those colleges end up employed by government agencies, local, state and federal.  The entire federal bureaucracy has become a swamp of environmental alligators and giant blood-sucking mosquitoes that eat away at the livelihood of rural landowners.  This is the swamp that Trump should drain.

Using federal environmental law and pandering to the Indians because of our collective guilty conscience, water is being denied to thousands of farmers in central California to “protect” a two-inch fish.  Dams that provide vital electricity, irrigation water and flood control are being dismantled for that same two-inch fish.  Indians, using ancient treaties, perverted by federal junkyard-dog lawyers, are taking over water basins in Montana, Arizona, California, Oregon, Texas and New Mexico.  These actions are purposely “drying up” private lands, putting thousands of agricultural workers and livestock producers out of work and forcing many into bankruptcy.

Water is the lifeblood of all agriculture, as well as raising the livestock that provides the protein for a hungry nation.  Without water, there is no agriculture or agricultural jobs and correspondingly, there is no food.  Over-regulate the farmer and the rancher or take away his water, and you are attacking one of the most important ingredients to the survival of human life.  That is collective and national suicide.

Raising cattle takes a lot of land, especially in the dry and arid Southwest America.  For at least 200 years cattle have been raised on private lands and adjoining federal lands, called allotments.  For almost as many years there was a symbiotic relationship between livestock producers and the federal government over management of the allotments.  That is, until radical environmentalism became institutionalized at every level of government.  In open violation of allotment contracts that run with the land, government is locking up these allotments in the name of environmentalism and animal habitat, creating a growing bitter and adversarial relationship between livestock producers and the federal government.  (See: “Rural America in the Crosshairs“)

One landowner in Southeast Nevada (Wayne Hage) has been fighting the federal government over legal allotment rights, which the federal bureaucracies unilaterally took away.  The legal battle has been raging for over 20 years.  A $14,000,000 settlement was awarded to the family by the U. S. Court of Appeals but the federal government continues to fight the landowner, denying them the settlement.  Wayne Hage and his wife have died and the son has had to take up the fight.  The family has spent more than $2,000,000 in legal fees and expert witnesses.  Unfortunately, they have been denied any restitution for their losses.  The fight will probably go on until the government runs the family out of money.

This is just one landowner’s fight with government.  There are thousands more.  It is a daily occurrence that the urban dweller never sees.  Many landowners simply don’t have the resources to fight and capitulate or roll over.

Farming and ranching is extremely difficult and dangerous work.  The weak in body, mind and spirit need not apply.  If the elements don’t get you, the government will and right now, the government is “getting” the rural landowner to the point of rural desperation.

Which brings us to the election of Donald Trump as President of the United States.  The “Donald” promised many things during the long and bitter 18-month campaign.  Some of his promises were welcomed by millions of Americans and even rural Americans who have had their fill of what seems like perpetual Progressive and radical environmental rule.   In fact, rural Americans came out in droves to vote for Donald Trump, hoping he might be able to bring relief to the duress they must endure from government and the environmentalists.  Flyover country finally found its voice.

The question still remains, however, whether a President Trump will do anything to roll back a federal bureaucracy that has become an almost absolute power unto itself without accountability.

We don’t know what Donald Trump thinks about the environment.  Is he a rabid or a moderate environmentalist?  Does he believe in the fraud of climate change?  Does he believe in the constitutionality of property rights?  Or does he take on the international view of environmentalism as promoted at the Earth Summits in 1992 and 2012 in Rio de Janeiro that gave us UN Agenda 21 policies, policies that would do away with constitutional land ownership?  The reader, urban or rural, needs to learn all they can about AGENDA 21.

But Trump is going to have a lot on his plate right off the bat.  Foreign entanglements and possible wars, to the economy and jobs, to illegal immigration, to ObamaCare, to trade policies and a host of other issues will occupy the majority of his time.  Will he have time or the inclination to address the federal and environmental encroachment on and harassment of private landowners?  It isn’t likely.

So the fact remains, rural landowners are still going to be on their own to fight the growing and intrusive local, state and federal bureaucracy.  This will lead to local skirmishes and violent outbreaks.  Trump will only address the issue if the skirmishes and violent outbreaks erupt on a national scale and are impossible to ignore by the people, the press, the Congress ….. or the President.

Without intervention from the President or the Congress to rein in the federal bureaucracies, landowners are going to have to organize and band together in peaceful opposition and resistance against irrational land use and radical environmental rule.  Standing alone is tantamount to committing land ownership suicide.  Government will run over the single landowner as if he wasn’t there.   There is only protection from government in large rural numbers that are willing to lay it all on the line.

Their first line of defense is the rural landowner’s property line, and they need to protect that property line with powerful, legally intimidating, constitutional NO TRESPASSING signs that give them the RIGHT TO EXCLUDE anyone from their property.  They need to attend public meetings of county commissioners or supervisors in large groups and raise hell at those meetings about existing and proposed land use ordinances that limit, impede, or stop the constitutional and rightful endeavors of land ownership.  They need to immediately challenge state or federal intrusion on private property rights.

Landowners need to learn how to FIGHT GOVERNMENT without having to hire an expensive lawyer who will suck up their savings and maybe even their land but not win the case for them.  A lawyer has no incentive to expedite your case since he is paid by the hour.  He has no incentive to tell you the truth about your chances of winning.  Further, a lawyer’s allegiance and loyalty is to the court, not to the landowner who must pay the lawyer’s fees.

Finally, urban dwellers had better get behind this fight for rural landowners or start facing food shortages and rising prices.  They are already being affected by this environmental nonsense.  It’s already hurt them.  They just don’t know it yet.  But they will, eventually.

NOTE:  Trump can’t help you with your local, state, or federal problems, but maybe we can.  For those of you that find yourself at odds with government, urban or rural, or have received nasty notices from them, whether federal, state, or local, we have developed defenses you can use against them, without hiring an attorney, even the IRS.  You can check out these defenses on our two websites.  For the rural landowner, click HERE.  For the rural landowner or the urban dweller, click HERE.  If you need immediate help with a land use problem, click HERE.

Why Trump Won’t Stop the Land War in the West added on Sunday, November 20, 2016