AN OCTOBER “SURPRISE” FOR ALL 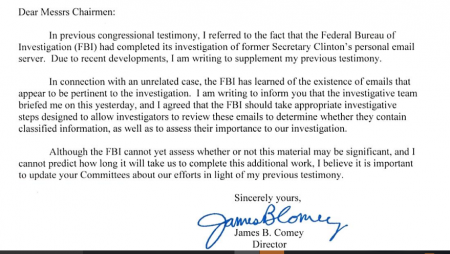 (Oct. 28, 2016) — NBC News and Fox News, among others, reported early Friday afternoon that FBI Director James B. Comey has written a letter to the Senate Judiciary Committee stating that the law enforcement agency is scrutinizing emails found associated with Democrat presidential nominee Hillary Clinton not previously disclosed during its year-long investigation concluded in early July.

Comey stated that the additional emails were discovered “in connection with an unrelated case.”

According to NBC producer Jesse Rodriguez on Twitter, seasoned NBC anchor Pete Williams reported that the rejuvenated “email FBI investigation [is] not related to Wikileaks or Russian hacking” in a reference to the open-government endeavor, WikiLeaks, founded by Julian Assange which has released more than 35,000 emails beginning October 7 initiated or received by Clinton campaign chairman John Podesta.

The Democrat National Committee (DNC) and Clinton campaign have frequently blamed “the Russians” as being the source of the WikiLeaks releases, a claim Assange has repeatedly denied.

The trove of emails contains communications among Clinton strategists, communications personnel, journalists, outside attorneys, and other political operatives. While many of the emails are arguably innocuous in nature, many others show coordination between the Clinton campaign and major media; the DNC’s favoring of Clinton during the primary process; and longtime Clinton associates discussing how to “clean up” the revelation that Barack Hussein Obama lied to the American people when he told CBS reporter Bill Plante that he knew nothing of Clinton’s private email server until the media reported it in early March of last year.

In a congressional hearing late last month, many Republicans appeared nonplussed and/or disgusted with Comey as he testified as to the reasons the FBI did not refer the evidence it had gathered about Clinton’s use of a private email server over which she sent classified information to a federal grand jury or otherwise recommend prosecution to its parent agency, the U.S. Department of Justice.

According to a CNN report, the Clinton campaign appeared to have no advance knowledge of the revelations made in Comey’s letter, with some news outlets describing it as a “surprise.”

When Clinton’s private server was first reported by The New York Times on March 2, 2015 prior to the announcement of her presidential run, WikiLeaks emails show that her strategists appeared surprised by the “depth” of its coverage.

After the news broke today, Republican presidential nominee Donald Trump opened a rally by informing attendees that “they are reopening the case into her criminal and illegal conduct that threatens the security of the United States of America.”

Update, 3:10 p.m. EDT:  Fox News is reporting that “a senior law enforcement official” said that “the newly discovered emails did not come from the Clinton server – but from another device from another government official.”  The Post & Email has therefore removed the words “From Private Server” which appeared in the title of the foregoing article when it was first published.