WILL THEY KEEP COMING? 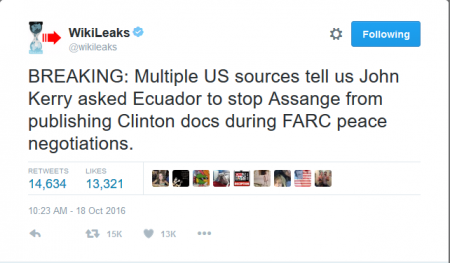 Since Friday, October 7, WikiLeaks has released thousands of emails exchanged with or sent by Clinton campaign chairman John Podesta, who was formerly then-President Bill Clinton’s Chief of Staff during the 1990s.

At Wikileaks’ ten-year press conference on October 4, Assange, who has been living at the Ecuadorian embassy in London for four years because of a warrant issued by Swedish authorities, appeared by video link and suggested that the government of Ecuador might be pressured to prevent documents relating to the Clinton campaign, whether directly or indirectly, from being published.

On Monday morning, reports surfaced that Assange’s Internet connection had been severed by a “state party” and that his life might have been threatened.  Later that day, Wikileaks stated that the government of Ecuador had imposed the cutoff.

Assange’s reference to “FARC peace negotiations” appears to be Kerry’s meeting in Colombia to sign a peace agreement with the government of Colombia and a rebel group, FARC at which Ecuadorian officials were present.

Assange has taken journalists to task for stating that the emails he has acquired were a result of “hacking,” contending that he has many sources for the documents he disseminates.

The Podesta emails reveal transcripts of Hillary Clinton’s paid speeches to Wall Street bankers and other groups after she departed the State Department in early 2013. One of the revelations is that Clinton told the National Multifamily Housing Council that “you need both a public and a private position.”

According to Newsmax on October 7, “The speech transcripts were produced under an agreement Clinton routinely imposed on any organization that hired her to speak. The contracts, such as ones crafted by the Harry Walker Agency, required the organizations to hire, at their own expense, a stenographer who would provide the transcripts to Clinton and not keep copies for themselves.”

Clinton has previously declined to make the speeches public.

FBI documents released on Monday suggest that Clinton removed items belonging to the State Department after her resignation.

Connections between a significant number of mainstream reporters and the Clinton campaign have also surfaced in the Podesta emails.

Email releases show that Clinton campaign staff have referred to Catholics, blacks and Latinos in what could be viewed as derogatory terms.

Her campaign also attempted to convince Illinois election authorities to move the state’s primary back because they believed it would be beneficial to her.

Prior to the Wikileaks Podesta releases, the website TruePundit reported that in November 2010, Hillary Clinton had discussed killing Assange with a drone strike in a meeting with Obama and national security personnel. Following its initial story, Assange’s attorney, Melinda Taylor, appeared to confirm its accuracy during her remarks at the tenth anniversary conference.